Will my phone work on the Fido network?

Your device must be compatible with the Fido/Rogers network, which uses:

To access LTE, the device must be compatible with one or more of the following:

Croustibat
I'm a Participant Level 2
In response to FidoFrancois
Options

Hello, I'm thinking of buying Xiaomi Mi 9 which was announced and should come out very soon.

On a previous post, you said LTE band 12 is used by Fido in certain provinces. Is it used in QC and more precisely in Montreal ?

From what I see, using this phone shouldn't be a problem at all, even though it's missing band 17. Am I right ?

We're not able to provide the exact regional breakdown of which provinces are covered by this LTE band. We also cannot confirm 100% guaranteed service on non-Fido phones. That being said, if you're phone is compatible with Band 4 and or Band 7, the LTE should work well.

Croustibat
I'm a Participant Level 2
In response to FidoPierre
Options

Hi, I have unlocked iphone 6s and gettimg only 3g network. How do I get LTE? I have added APN but no luck.

Hi, I have unlocked iphone 6s and gettimg only 3g network. How do I get LTE? I have added APN but no luck.

Do you have an LTE SIM card? What type of mobile network is selected?

Were you able to connect to LTE in the end?

iPhones do not require APNs to be added manually. Can you please confirm how and where did you add it?

Have you checked your device's settings and enabled LTE?

Let me know how it goes.

Hey @Cawtau, Fantastic post, but it would be good to note on the answer post that the 2G Frequencies are to be disconnected in 2018, and users should maybe avoid using that band.

Thanks! That's a great suggestion!

Do you have any further information other than committed support until 2018? While it has been widely rumoured that Rogers plans to decommission the 2G (GSM) network by 2018, there has been no official statement from Rogers to that fact. Did you see my earlier post above? I just find it peculiar that the Rogers Enterprise description of their Network Coverage switched from ...committed support until 2018, to ... only national carrier offering combined GSM, GPRS, EDGE, 4G HSPA+, LTE... with no mention of 2018. Note that it's the same source -- referenced by Wikipedia-- which likely started the rumours with the original statement.

Admittedly, I haven't been able to find any corroboration but if the dates in the graphic are correct, then the decommission of the 2G network won't occur until 2020.

Same story and this is the reason why i fear buying another 2G phone...Ive spoken with Customer support and no one seems to have a single idea about when the disconnection will actually occur.

One of the things to consider is the age of the cell phone.  I am a Fido legacy user (long, long time), but my needs regarding cell phones are relatively small.  Hence I do not need to upgrade my hardware often.  My current Nokia is around seven years old.  This caused an interesting situation on a long road trip from Calgary to Charlottetown.  There was no Fido service from Easter Saskatchewan to Sault Ste. Marie, and again in Eastern Quebec and Newbrunswick.  However that was only for "my old" hardware.  On calls to Fido, we discovered that on cell towers that are either new, or have been replaced, or remodelled, the old technology does likely not exist.  Only on towers that are, in fact, also old, without having been remodelled, is the old technology still present.  Where the old is present it is of high quality and just keeps working.  No one could however say for how much longer.  SO... one day I'll just have to upgrade.

I'm guessing that your old Nokia phone is a 2G or GSM only device.

It is true that Rogers is no longer increasing its GSM coverage footprint and has only committed to support its 2G GSM network until 2018 (see here). However, I think the likely reason you experienced those service outages along your road trip is because you might have travelled through areas not covered by Fido/Rogers' towers (see here). Newer phones/devices would have been able to roam on the other networks as Fido-EXT (Extended Coverage) when outside of Fido/Rogers coverage. However, none of the other service providers in those areas offer 2G services anymore. Even when they did still offer them, they were on the incompatible CDMA network.

Unfortunately, I haven't been able to find a more definitive date for when the GSM network is to be decommissioned.

strauss44
I'm a Participant Level 3
In response to Cawtau
Options

@Cawtau wrote:
I'm guessing that your old Nokia phone is a 2G or GSM only device.

It is true that Rogers is no longer increasing its GSM coverage footprint and has only committed to support its 2G GSM network until 2018 (see here). However, I think the likely reason you experienced those service outages along your road trip is because you might have travelled through areas not covered by Fido/Rogers' towers.

I was told there was Fido coverage in all the areas where we travelled, at least that's what I was told by Fido IT.  It's simply that the technology for our phone was on all the towers.  It's not really a problem for me, because where I live there still is coverage for my "old" techology phone.  When the time comes, I have no issue with having to upgrade if and when either the phone quits or if the tower equipment is demobed, whichever comes first.  I have had good service out of an already 7 year old cell phone.

As previously noted, there is little published information regarding the decommissioning of the Rogers GSM or 2G network. Most sources simply refer to the same Wikipedia link I referenced above. Interestingly, though, I did find this: 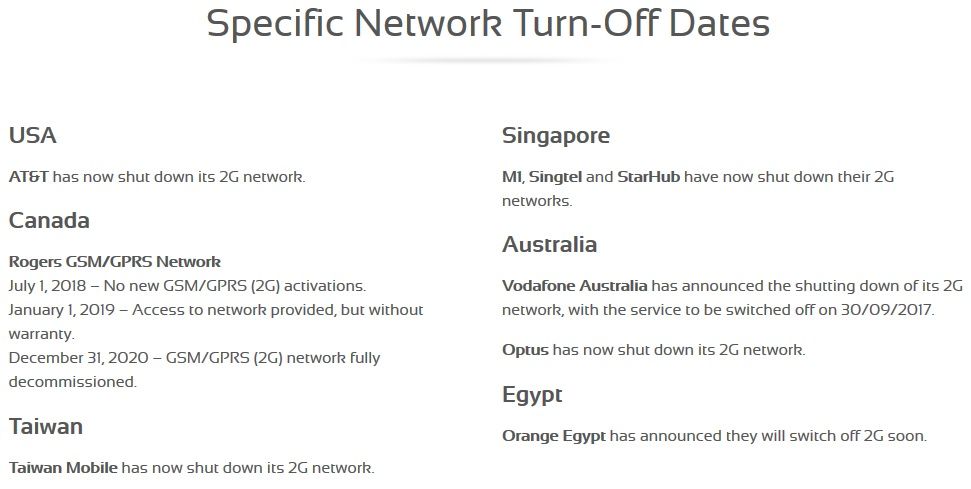 While I haven't been able to find any corroboration, the timeline does seem to fit. In addition, Rogers has replaced their earlier statement:

In addition to being first in Canada with LTE, 4G HSPA+ and HSPA networks, Rogers operates Canada's only nationwide 2G GSM/EDGE network, and has committed support until 2018.

If proved correct, it might only slightly delay the inevitable sunset. 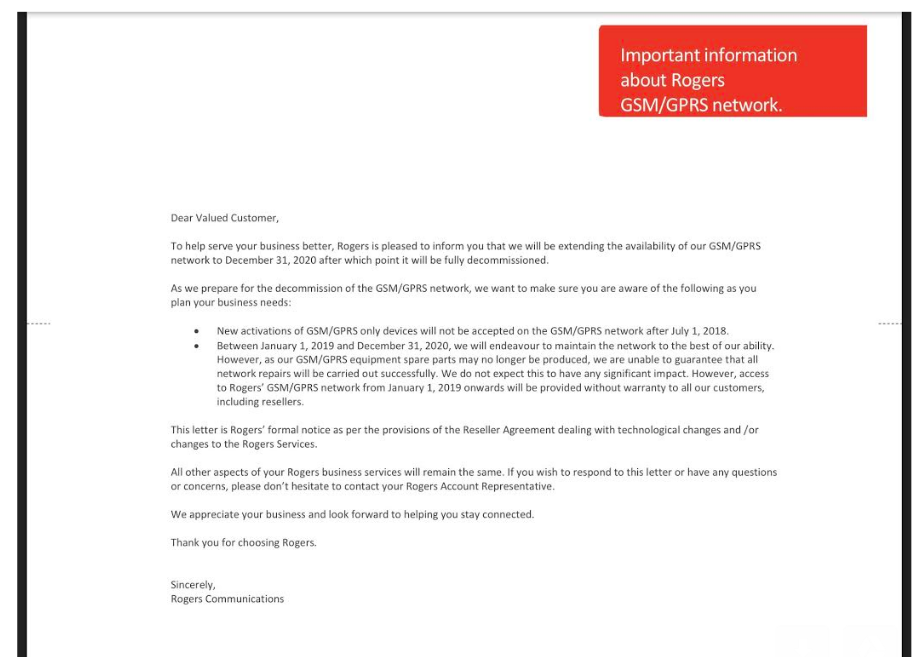 Xale
I'm a Participant Level 1
In response to Cawtau
Options

I have a fully unlocked Ulefone Armor 2 but seems I can only connect to 3g data. Just wondering if there are other options I am missing to enter to get it working on here, I see many options in mobile network settings, I have my prefered to be 4g/3g/2g nd enhanced 4g LTE mode activated but I never connect to these networks just wondering if anyone has some insight to this issue. Thanks!

Welcome to the Community , so happy to have you

To be sure, did you set up the APN settings as instructed here ?

Did you verify if the device is compatible with our network?

Did you figure this out? Let us know.

I'm considering an eBay purchase of a Verizon unlocked Moto Z Play. Will it work with Fido guaranteed full network access? I believe it will being an unlocked version plus listed specs but I just want to be 100% sure since things can change in an instant, you never know. Plus it's crossing the border.
1 Like
Reply
Go to solution

Senior MVP
In response to 006
Options

@006 wrote:
I'm considering an eBay purchase of a Verizon unlocked Moto Z Play. Will it work with Fido guaranteed full network access? I believe it will being an unlocked version plus listed specs but I just want to be 100% sure since things can change in an instant, you never know. Plus it's crossing the border.

Firstly, no unlocked phone will be guaranteed for full network access on Fido. Only devices purchased from Fido will be tested and assured to work on their networks.

That said, most unlocked phones with compatible bands/frequencies should work on the networks. Some features however, may not be available on unlocked devices (ie android voLTE).

Verizon phones have been notorious for being rather difficult to get to work properly (see here and here). Unfortunately, I'm not sure whether solutions were ever found so most of this is speculation.

My understanding is that since the Verizon's main network is CDMA-based, devices might need to be activated on their network before being able to be used on other networks -- even though they are unlocked. This community member here, was able to get most of their phone's functions to work on the networks, except for MMS. I suspect they were able to use the other functions on the networks because the phone had been previously activated on Verizon.

With regards to your particular phone of interest, I assume you're referring to the Moto Z Play Droid. That phone is exclusive to Verizon. The other providers carry the Moto Z Play.

Judging by the specifications provided for the Moto Z Play Droid:

So even if you were able to get that phone to work on the networks, it would not be fully compatible with the networks. Coverage depends on the availability of matching bands and frequencies on surrounding cellular towers. You can get an idea of the cellular towers in your area here.