I received a call from an unknown number which I don't pickup; expecting it to go to voicemail.

The number above showed up on my screen.  I tried to access my voicemail the usual way and at pressing "1" , this "RCI_F" comes up.

Is this legit?  Have my phone been hacked or something?

I got the same problem.

I changed a phone number to a proper number, but I couldn't change service provider name - it's still RCI-F.

I called to phone technical support, and the lady with sleeping voice sad that as long as I can call to voice mail, there is nothing else she can do.

I called again, and I was transfered to anothre technical support guy. He was not aware about such issue, but he did reset on his end, and he asked to do network reset on my phone, and it didn't help.

My device also shows rci_f when I checked my voicemail section.  Carrier : rci_f . And my device is samsung it happened when recently I got notifications to upgrade my samsung device

I am worried as u mentioned you haven't noticed it.

My service provider is Fido, to the best of my knowledge. Is this a glitch in the Fido system or are phones/SIM cards getting hacked somehow?

FidoClaudia
Moderator
In response to DXS

Thanks for bringing this to our attention. To further look into it, we'll need some more info.

1. Are you able to change the voicemail retrieval number manually to the correct one:

2. What happens when you manually dial the retrieval number to retrieve your messages?

3. Can you confirm your device models and OS?

DXS
I'm a Participant Level 2
In response to FidoClaudia

I was able to change the number that my phone uses to reach voicemail inbox from the:

My service provider still shows as "RCI_F", however. There is no option to change that in the device settings.

In order to investigate this matter we would need to gather more info and details.

Can you please confirm the brand and model of the devices you're currently using? The OS version would be greatly appreciated as well.

On our end, as long as you're able to access the voicemail (VM) and retrieve your messages, there would be nothing wrong with the service.

As a side note, have you tried contacting the manufacturer as well for more info? Some of you mentioned that this started happening after a recent OS update, the carrier name of Fido could has been switched to RCI_F on your device perhaps? Since Fido is part of Rogers, RCI could stand for Rogers Communications Inc.

As for the voicemail, when calling that number, does it not forward you to your voicemail inbox?

Senior MVP
In response to FidoSaad

Following that, RCI_F could stand for Rogers Communications Inc - Fido.

Henry88
I'm a Participant Level 2
In response to Cawtau

My voicemail is set up but callers get "The caller is unavailable.. try again later" and does not go to voicemail.

When doing the query *#61# I get the following info: 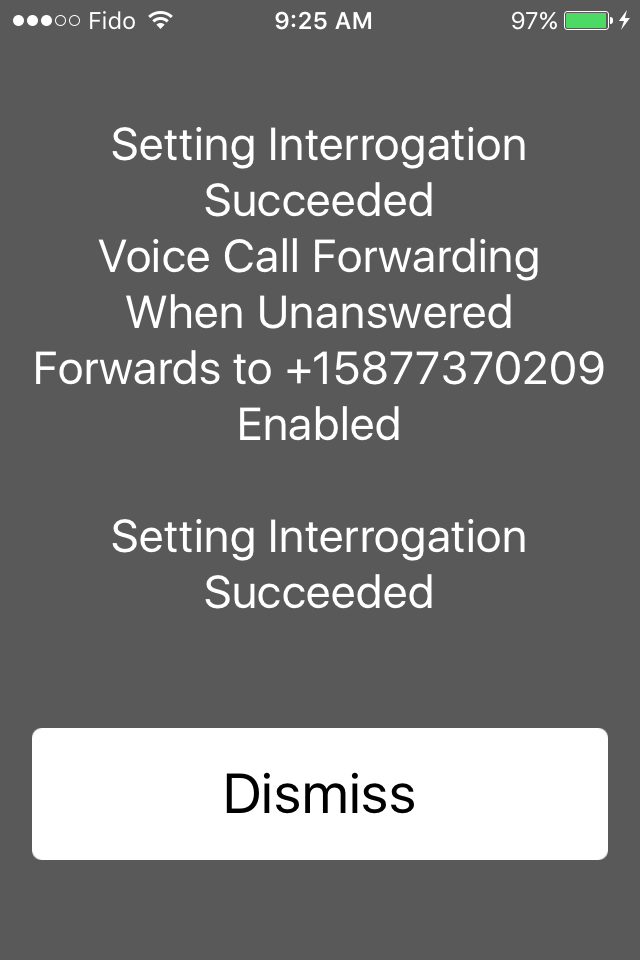 Have you tried a network reset? If not, feel free to contact us here and we'll be happy to help you. Alternately we can send you a PM here on the Community.

Henry88
I'm a Participant Level 2
In response to FidoAnthony

We've replied to you via PM. Talk to you soon! 😊

fido6053
I'm a Participant Level 2
In response to FidoSaad

I'm ignoring any phone upgrades, so updates have not been done for a good year.

My voicemail number was changed automatically by network (or by Fido/Rogers).

My wife has the same phone, and she got that change automatically too - voicemail number changed to 1-587-737-0210. None of the technical support personal are not aware about such number, and they advise to change it again back to regular 416 number.

I think it's immoral from Fido/Rogers to do such change without telling a user.

When I tried to check my voicemail, and I realised that my phone is calling to a new place with weird name to a weird phone number, I hung up right away because the phone could be scam, and I didn't want to enter my pin to give access to scammers.

"On our end, as long as you're able to access the voicemail (VM) and retrieve your messages, there would be nothing wrong with the service."

You are wrong. I'm not going to call suspicious unofficial number 1-587-737-0210 to enter my pin to check if the service is legitimate.

I think Fido/Rogers are doing some study/experiments, and they messed up voicemail service by sending a code to automatically change setting on my phone, and you are covering it up theyn there is nothing wrong with it, or Fido tech support are highly unprofessional, and they don't know what is happening with their network because probably Rogers is doin'g something without telling partners.

Hey @fido6053 thank you so much for all the info this really helps. Let me reassure you we have not made any changes to our retrieval numbers. We really want the best for our customers and respecting their privacy as well as their information is crucial.

Have you tried doing a network reset? This would bring all of your settings back as they were when you got the device.

fido6053
I'm a Participant Level 2
In response to FidoDaniela

Network reset was done on Fido end by tech support, and on my end through settings.

I think it's a new Fido voice message retrieval number, but it's not official yet, and even tech support is not aware about it. Maybe it cam from Rogers somehow.

Can you please confirm in your phone's settings that this is your voicemail number?

I am having the same issue with my phone. My service provider is now showing as RCI_F instead of Fido. And my voicemail phone number is no longer 647 but was somehow changed to 587-737-0210. Please advise how to fix this issue.

DL79
I'm a Contributor Level 1
In response to FidoSaad

So what does this mean? My voicemail is linked to an unknown number ? How do I fix this?