Oh no Fido. I  return to the fold and got the IPhone XS with the $20 monthly cost. Lo and behold I see my first bill and I'm charged the full $53.55 not $20. If this isn't rectified I'll be returning this device.

It appears that they changed the way they display and calculate the costs. Are there any bill credits or discounts shown on your bill? 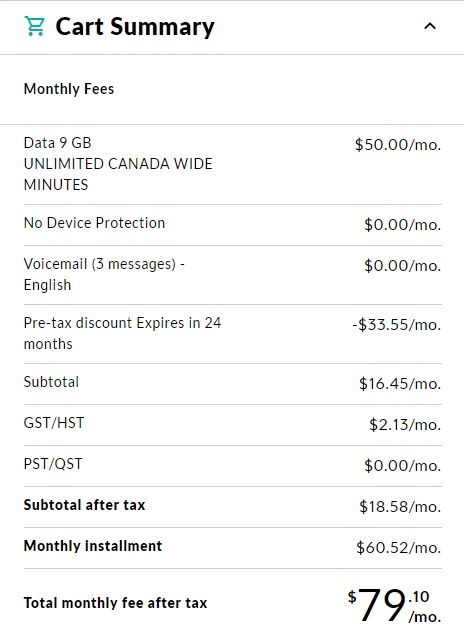 While the monthly installment is not reduced (shown including taxes), the cart summary is showing the bill credit of $33.55, which calculates to their $20 after bill credit shown on the website. Before, people were noticing an increase in the final costs because of device taxes were based on the pre-bill credit device costs. Now, the calculations should be more straightforward. From the example above, calculating the cost of monthly plan and discounted phone ($50 + $20 plus taxes = $79.10) is the same as applying the bill credit to the account as shown above.

**edit** The old calculation used to be:

Did you receive the bill credit for your device?