Fido has made unauthorized roaming charges to several lines on my account!

In order to start Fido Roam, one has to turn on "DATA ROAM" function on their smartphones - per https://www.fido.ca/consumer/mobile/travel

I always keep data roam off on my phone! Turning it on by mistake is out of question (one cannot simply activate it by "pocket-dial"). Had it been on before I landed abroad, Fido would've charged me for every single day while I was abroad, instead it's a one-time charge (in all 4! cases on my different lines on my account).

Please contact me immediately for details and to solve this issue (your customer support by phone is a joke, with waiting time of 60+ minutes)!


...In order to start Fido Roam, one has to turn on "DATA ROAM" function on their smartphones - per https://www.fido.ca/consumer/mobile/travel...

The statement to enable data roaming on the webpage is to remind people it needs to be enabled to use data. Since phones now automatically roam, the use of talk and text is inherent because there is no other setting.

When your phone first connected to a foreign network, you should have received a SMS indicating your phone had connected outside of Canada with provided the daily rate for use.

Any use of your services -- using your device to make or receive a call, send a text message or use data while abroad -- will trigger the Fido Roam charge

Receiving SMS does not trigger the Fido Roam charges. However, you should note that the data within a MMS would be considered roaming data and would trigger the daily charge.

In addition, rejecting an incoming call should no longer trigger the Fido Roam charge either (see here).

If you opt out of Fido Roam, you would then use your services on a pay-per-use basis (see here for rates).

Had you used any of your services? Are your phones capable of Wifi-calling? Is it possible your phones used Wifi-calling services while abroad? Were you using GPS with your devices? With some phones the, High accuracy setting in location settings can still use data to provide a more precise location even with data and/or data roaming disabled. Were your phones on for the duration of your trip abroad?

Lololo
I'm a Participant Level 3
In response to Cawtau
Options

@Cawtau , thank you for the crash course in "roaming" notion.

You are misleading Fido customers by stating: "Any use of your services -- using your device to make or receive a call, send a text message or use data while abroad -- will trigger the Fido Roam charge"

In order to start Fido Roam, one must (a) switch on Data Roaming function on their smartphones and (b) confirm that they want to use Fido Roam by texting "ROAM" to 222. It does NOT suffice to simply send a random text or receive/place a random call to activate Fido Roam (see below the screenshot from fido-roam-faq). I had done neither of the 2, but still was charged Fido Roam fee for a single day, each time I went abroad. If one does not do the above while abroad, "any use" of their services are charged on a "regular roaming" basis (i.e. NOT under Fido Roam program). I sent 1 SMS from abroad, Fido must charge me whatever their tariffs are for such service (~50-75c) and not Fido Roam fee.

It is unfortunate you misunderstand what "Fido Roam" means and what Fido themselves write on their own website on this topic: 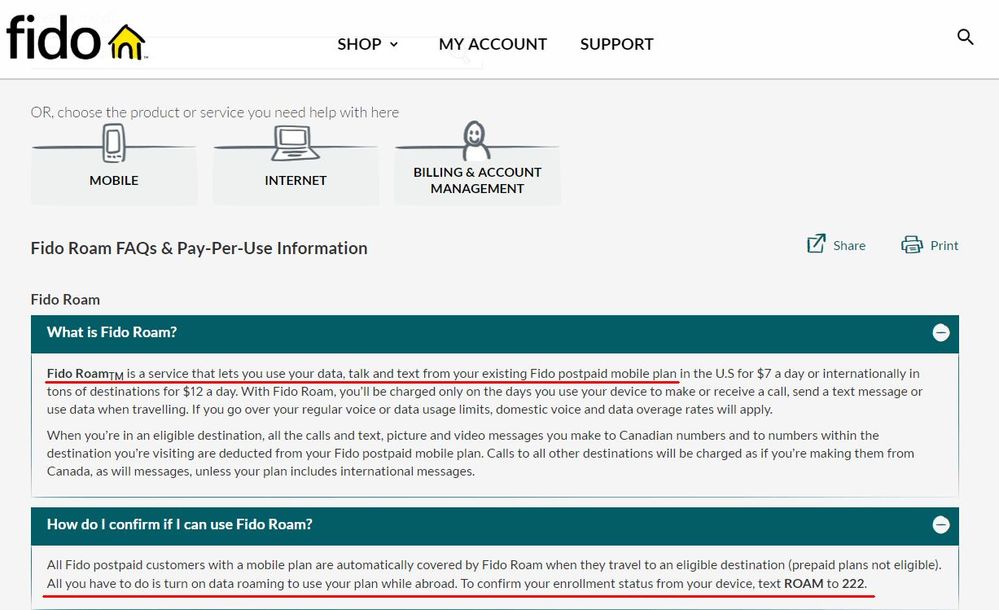 I've been with Fido since before they introduced Fido Roam and I have used Fido Roam service many-many times in various parts of the world. This is the first time they charge me without my consent (on 3! different devices, in 3 different geographies on different days, by different users, so a malfunctioning device or human error is out of question)

I'm sorry, but you are mistaken. Is it possible you had previously travelled with plans which did not have Fido Roam. I have also been around since before Fido Roam, back in the days when Travel packs were available. Ever since Fido Roam was introduced, it was automatically enabled. However, when it was first introduced, only newer plans had Fido Roam while older plans did not. Older plans could be used on a pay-per-use basis or you could purchase a Travel pack. It sounds like you previously travelled with an older plan. When Fido removed their Travel packs, they introduced Fido Roam to most (if not all) of their post-paid plans. When that happened, Fido Roam was automatically enabled.

~ taken from Fido Roam - Everything you need to know.  **

So again, any use of your services -- using your device to make or receive a call, send a text message or use data while abroad -- will trigger the Fido Roam charge.