I had switched recently from Teksavvy to Fido and for some reason I find my VPN speeds to be slower than my previous ISP. That is strange since my connection via Fido is much faster and I believe both services use Rogers network backbone so the framework is solid. Please help shed some light on the matter. Teksavvy services provided me close to 30 Mbps (download speed) via VPN but VPN through Fido is only 8 Mbps (download speed).

My computer is a Desktop PC that is connected via ethernet cable to a Hitron CGN3AMF which has gigabit ethernet LAN ports and my current internet connection package has download speeds of 75 Mbps and upload speeds of 10 Mbps.

Thanks for your reply @XSVYRAKX

I see that you mentioned in the second paragraph that your plan has download speeds of 75 Mbps and upload speeds of 10 Mbps. Can you confirm these are the speeds you're getting without the VPN?

We'll be happy to help with that but we just need to confirm some infos with you first.

Have you always had that issue?

Can you also confirm whether you tried to reset the modem?

As requested, I had the normal Fido internet speeds tested. Please take a look and let me know how to approach this issue. 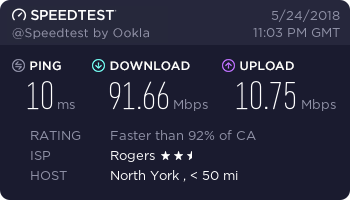 PS - As it says Rogers on the ISP, please note what I said previously about Fido using Rogers framework.

Senior MVP
In response to XSVYRAKX

Those speeds you posted seem appropriate for your internet package. I assume you're aware that using a VPN will slow your speeds. What VPN service are you using? Some VPNs slow traffic more than others. Are you able to switch VPN servers? I tend to switch my servers quite frequently to the least loaded servers. I find the least loaded servers are often much faster than the closest servers -- even though they might be quite a distance away from my location. Obviously, it would depend on your location. In a heavily populated area, the closest servers would tend to be have more traffic and therefore be slower.

I understand your speeds were faster using the VPN when you were with Teksavvy. However, is it possible you were connected to a different VPN server?

XSVYRAKX
I'm a Participant Level 3
In response to Cawtau
Thanks for the reply. I've been using PIA for a long time and the situation does not seem to change when changing servers. Also, the bandwidth cap is eerily consistent and this makes me quite suspicious. Please advise or should test it out some more?
0 Likes
Reply

Thanks for your patience :),

Based on the numbers shared, those speeds are good. We've also made some verification, and we'd suggest tweaking the settings on your modem to improve the speed.

That being said, this is not something that we support as the information is not available from our end.

nixi
I'm a Contributor Level 1
In response to FidoSaad

You connection will slow down regardless when connected to VPN and higher encryption mean slower speeds, have u compared with other vpn providers to see if therr is such speed differences or tired different methods of connecting?

derekjchoi
I'm a Participant Level 2
In response to nixi

I also agree with XSVYRAKX.  I was with start.ca (60 down 10 up plan) and was able to pull consistent speeds through corporate VPN of about 7MB/s.  I switched over to fido due to the 50% off promo (75 down 10 up) expecting faster speeds, connecting to the exact same corporate VPN and only attained speeds of 4MB/s which translates to 30mbps.  I performed speed tests without VPN and was able to pull speeds in excess of 90mbps down.  Something is slowing down the VPN traffic

That doesn't sound right. We don't throttle the speed so there definitely shouldn't be that big of a difference.

Have you tested the speed without the VPN to see if it matches with the speed of your plan?

Has the speed always been the same using your VPN or is this a new issue?

Let us know, we'll be happy to look into it with you.

The answer to your question(s) is in the second paragragh. Please take your time reading time reading through it and let me know what you think or perhaps forward my concerns to someone who more specialized in the field. Take your time as I'm not in any particular rush.

Just wondering if you had a moment to review @FidoPamela's response and if it helped out!