I have been forwarding my spam email-to-SMS to @FidoStephen via PMs to help improve the spam filter for sms.fido.ca

Recently, another community member also posted a similar spam SMS they received. Perhaps a thread dedicated to collecting examples of these types of SMS spam might also help improve the spam filter.

If you're able to send and receive text messages, you should have no issue forwarding this SMS to 7726 :).

This can be done on most devices by opening the message, pressing and holding the body of the message, then choose to forward and send it to 7726. Be careful not to click on the link by mistake. 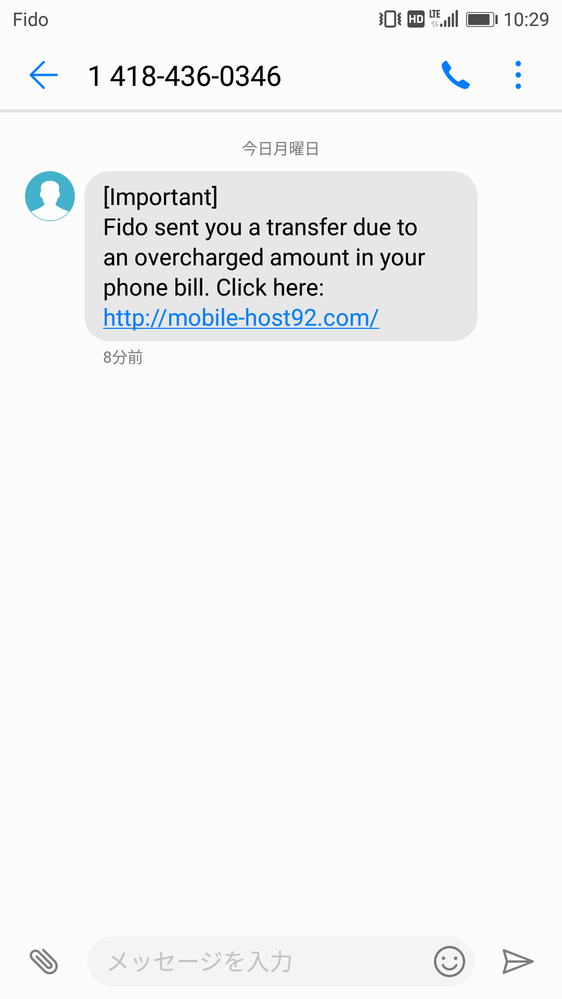 I moved your post here as that is indeed a spam text. You'll find everything you need to know in the solution of this thread!:)

[Important]
Fido sent you a transfer due to an overcharged amount in your phone bill. Click here:
http://mobile-ref76.com/

I'm strangely suspicious of this number since fido numbers tend to be short. I was about to accept it as I saw it when I woke up but it struck me as unusual. Is this a scam? I'm thinking it is but it would be good to know for sure.

I moved your post here as it's related to the same subject.

I wanted to share something that happened to me today because I feel that my experience can help prevent any of our customers from becoming victims.

I want to emphasize how important it is to be skeptical and use critical thinking when it comes to receiving a call/text/email from an unfamiliar number. The people who run these kinds of ploys go to elaborate lengths to fool and scare people into giving them their info and my experience can help prevent any of our customers from falling into their trap.

I received a call today from a number that I did not recognize, from another province (647-729-8921). I usually don't answer calls from numbers that I don't know so I let the call go to voicemail and they left a strange message indicating some kind of legal repercussions if I did not call them back. I thought that was weird so I googled the number and nothing came up. even weirder.

Either way, my thought was that they maybe had the wrong number, so, I decided to call them back to let them know and when I did, they already had my name.

The man on the line claimed to be an Ontario police officer contacting me on behalf of the CRA and even provided me a badge number for legitimacy but would not give me any information until I confirmed my personal information with him (red flag). When I refused to give him my personal information, he raised his voice and claimed that he would send my 'file' to my local RCMP and that they would be taking actions against me and possibly put me in jail.

At this point, things were starting to sound familiar. I vaguely remembered hearing about some kind of scam like this. So I asked him, if this is legitimate, if you are in law enforcement, how come the number he had called from is not linked to any law enforcement agency. He could not answer, and again threatened me. I told him that I did not believe what he was telling me and that I would like him to provide me with a phone number that could be traced back to a legitimate source. This caused him to hang up on me out of frustration.

I had refused to let him take advantage of me and, because of that, he gave up.

What I'm trying to get across is not to take anything in these type of situations at face value. Do your own investigating, ask questions, learn the signs that something might not be on the level. Threats can fluster people and, because they are scared, they become victims. Don't be scared to fight back.

Bravo @FidoAmanda and thanks for the tips.

yangeun2
I'm a Participant Level 1
In response to wickie
Options

I've got this message and I want to know that the number is Scam or not ;(

That's definitely not from us. I'll report it on my side but you can have a look at the answer here to do it on your side too

MVP
In response to FidoCharles
Options

here's one that has me scratching my head. I can usually tell if it's legit right away .is this from Fido? Even I have to ask sometimes. 🤔

Thanks for the information!

That message would be SPAM as well. The domain (000webhostapp dot com) is for a free webhosting site. I'm doubtful Fido would resort to a free hosting site.

MVP
In response to Cawtau
Options

Right? Even though I knew it, I still thought twice about it. They're getting trickier to spot. Whenever you get one of these texts, don't ever click it. Always come here to check if it is legitimate. If it is, a mod or community member can always help. 👍

You're right to check with the Community and anyone here wouldn't hesitate to let you know if the text you've received is legit!

Rhart1
I'm a Participant Level 2
In response to Original_Lucy
Options

Hello. I see from the board that Fido is working on this problem Spam (calls and Txt) See post from November 2017. We are now March 2018. How close to solving problem .

Thanks for writing about this!

We're thoroughly working on limiting the amount of spam on the network, rest assured!

What I suggest is to keep forwarding the content of the messages you receive to 7726 so we can keep blocking them on our end, that's the best way to make sure these messages stop.

You can also take a look on our blog about scam for more information!

Rhart1
I'm a Participant Level 2
In response to FidoRanya
Options

The number 7726 is short for SPAM. Once you’ve forwarded the message, you can safely delete it from your phone. for more info, click here.

Let us know if you have any questions.

Only SMS can be forwarded to the 7726 number to report SPAM. If you've been receiving spam calls, don’t provide any personal info to the caller. Just report the call to the Canadian Anti-Fraud Centre by email or phone (1-888-495-8501) :).

The world is full of scammers.

Thanks for helping us and sharing @FidoAmanda I feel awful you experienced this is horrible.

Along the scam number, if you having these callbacks recorded it can be forwarded as a formal complaint to "true" RCMP.

Have a beautiful Friday!

Fido Solutions lnc: Fido has sent you an transfer.
Your account has been overcharged. http://intermonllne.xyz

I tried calling the number back but a recording says it's "unavailable". The I'd says the number is from Quebec.