When I turn on new phone, I get AT&T stuff so I am assuming it is locked.

I requested unlock code but can't get it in per instructions.

All I get is....Mobile network unavailable.

Fido does not come up

Chez
I'm a Contributor Level 2
In response to Chez
Options

So...I talked to Fido twice plus technical.  They said to phone LG.

LG says the phone is a USA model but not locked.  Phone Fido and they say

Firstly, these are the band/frequency specifications for that phone:

Have you verified that the APN settings are correct? You can verify those settings here.

In addition, have you tried to enable roaming? Some phones might think they are roaming if they are outside of their intended market even though they use a local SIM.

It does not sound like the phone is locked. However, one of the issues with US model phones is that they can be rather restrictive with their usage off network. Unlike with Canada, each US provider has their own phone variant. There's a reason each provider has their own variant of a particular model of phone. Sure, it used to be that different versions used different systems (ie GSM vs CDMA) and to some extent, that might still be the case in some instances. However, most providers in the US use the same 3G and 4G systems (UMTS/WCDMA and LTE, respectively), though with possibly different bands/frequencies. In theory, assuming the phone has compatible bands/frequencies, it should work on the other networks.

Often the different variants are just to make them more difficult to use on other networks. For example, at one point some Verizon phones needed to be activated on their network before they could be used with a SIM. T-Mobile phones needed to be unlocked via a specialised app rather than using unlock codes. In some instances, phones might technically be unlocked but have certain bands/frequencies or certain functions blocked from being used....

I'm not aware of any specific restrictions AT&T might have put in place on their devices. However, it appears that difficulties trying to use them on different networks is not uncommon (see here).

Hope some of this helps

Chez
I'm a Contributor Level 2
In response to Cawtau
Options

Yes APN has been reviewed and gone over with Fido.

Seems the H910 is difficult.

Don't forget to let the Community know if turning on roaming changes anything!

Chez
I'm a Contributor Level 2
In response to FidoAmanda
Options

Roaming did not help.

Since your Fido SIM works with your older device we can narrow down the issue to your new LG V20.

As mentioned above, the frequencies we provide are fully compatible with your device. Even if it's a non-Fido phone, it should still function after configuring your APN settings. Could you perhaps share a screenshot of your APN settings with us so we can have a closer look?

Another suggestion would be to factory reset your device and try configuring it again. If none of the above works, I would advise reaching out to LG for more information.

Chez
I'm a Contributor Level 2
In response to FidoSaad
Options 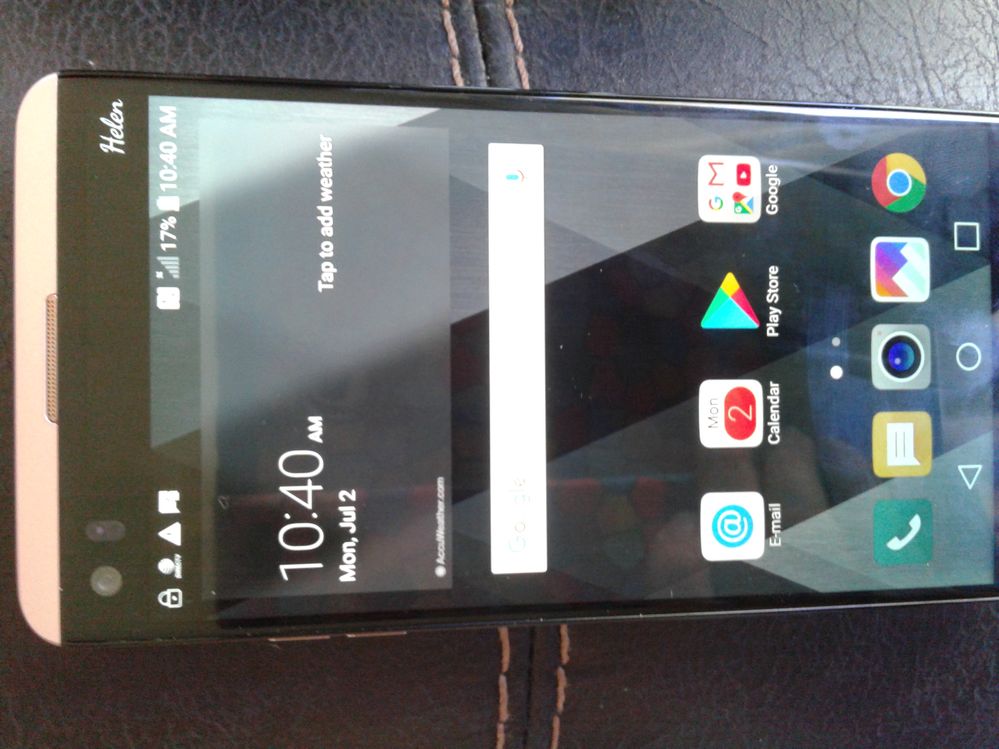 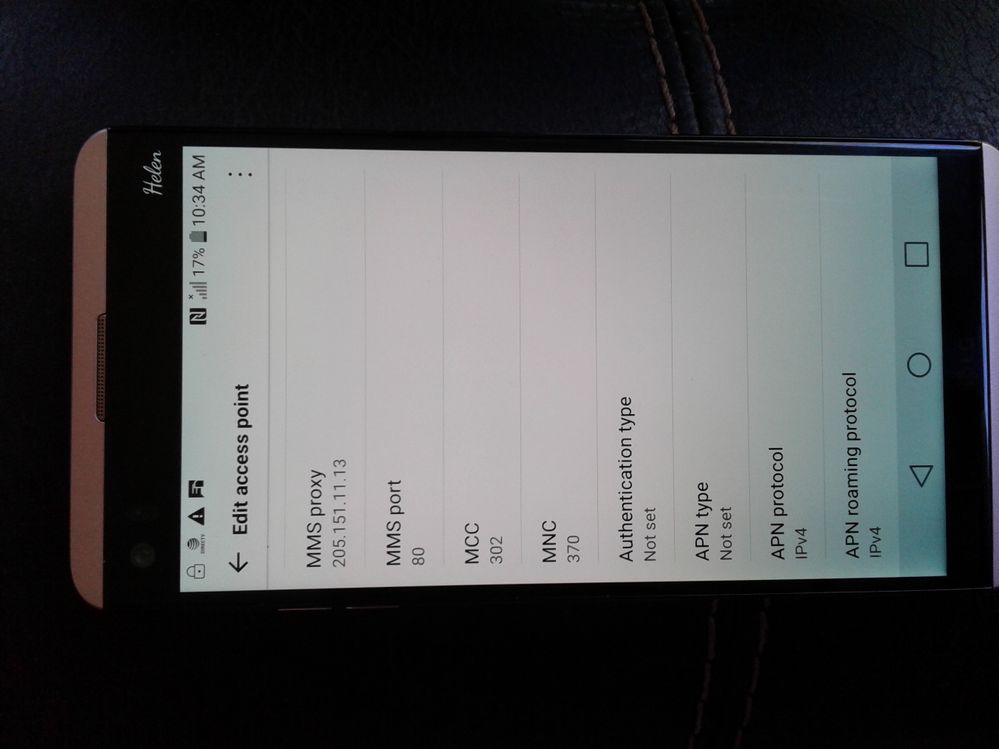 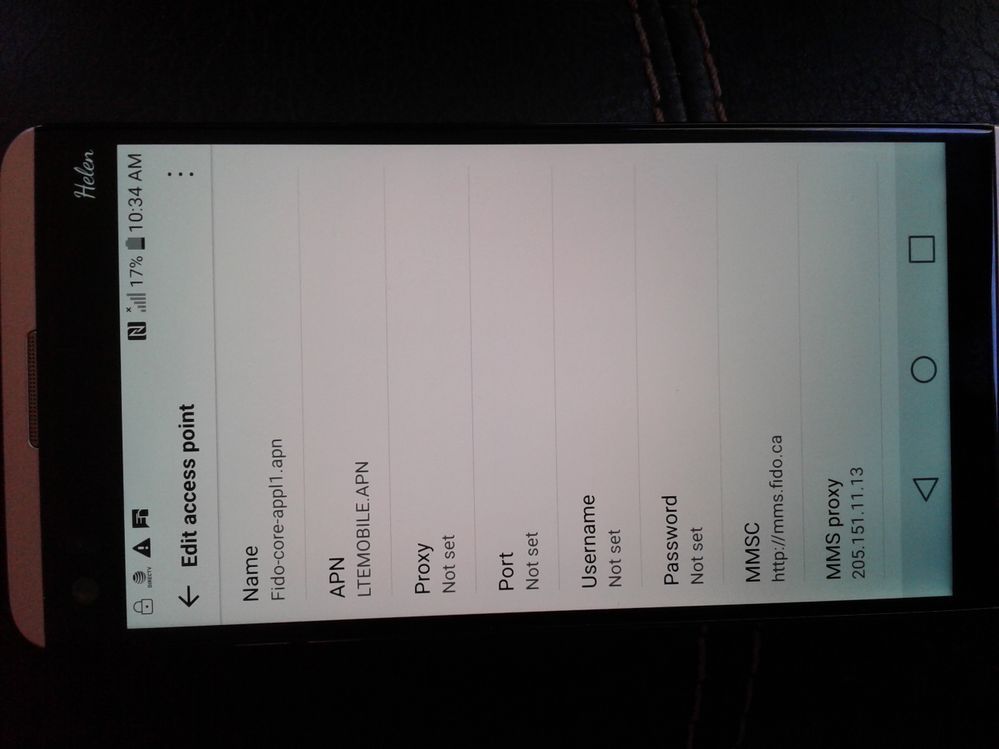 Sorry to hear you're still having issues with that phone. Just some quick notes regarding your APN settings... You might consider changing the Name of the APN. The Fido-core-appl1.apn is the APN used for devices not capable of LTE. Mine is named Fido LTE. You might also consider trying to use all small letters for ltemobile.apn. I understand it might seem like a trivial change, but some devices can be that finicky.

Also, it does not appear that the APN type has been specified. Here again, phones can be rather specific with regards to which types are accepted. The APN type on my phone is internet + mms. Other phones might use something like default,supl,mms.

In addition, have you tried to connect to the networks with this phone from different locations? I understand your old phone works fine at your location, however, it's possible the reception on the V20 might not be as robust as your Viking phone (see here and here). You might consider trying to connect a some other locations, possibly closer to the cellular towers. You can get an idea of your area cellular towers here.

Chez
I'm a Contributor Level 2
In response to Cawtau
Options

Did your APN settings different ways and rebooted each time.

There is a definite x over the signal indicator.

So tomorrow I am going to sit under the tower!

From what you told us, the issue seems to be related to the device itself, so sitting under a tower won't help

You mentioned that AT&T gave you an unlock code, were you able to enter it?  Also, when you spoke with LG, did they verify if the phone was blacklisted?

Chez
I'm a Contributor Level 2
In response to FidoJulien
Options

I too believe I can sit the tower until h*** freezes over and it wont work but will try.

Seller has agreed to full refund so I will try the tower first.

Chez
I'm a Contributor Level 2
In response to FidoKenny
Options

Zippo under the tower.

I give, I surrender, that`s it!

I would like to thank this wonderful forum for all your help.

I can't believe all the very valid suggestions.

As we speak, my phone is on a slow boat back to China.

MVP
In response to Chez
Options

@Chez try booting the phone is safe mode and see what happens, you can get instructions for that here.

You can also try doing a factory reset and see if that helps.

Edit: Just for kicks go to the network settings and set the phone to connect to GSM/2g only and see if it will connect.

When you first got the phone and you put the Fido SIM card in how did you know it was locked? Did it asked for an unlock code at any point? If it did and you enter the wrong code more than ten times it will hard lock the phone.

You also said the person at Lg checked the IMEI number what exactly did she check? Did any do a check to see if the IMEI was blacklisted?

Factory reset was done with LG Canada.  LG Canada also checked IMIE.  She said phone was not locked but showed as a USA exclusive phone.

MVP
In response to Chez
Options

Try putting it in safe mode and if it register on the Fido network then there is an app that is preventing it form connecting. You can also try setting it on GSM only and see if you can get it to connect, if it does then its a LTE problem.

MVP
In response to KAPABLE-K
Options

Also can you go to settings then about and tell me the exact model number you see there.

Were you able to try the suggestions Kapable-K and Cawtau gave you?