I received five roaming charges while away from Canada. My phone(Samsung A70)'s data roaming and cellular data were off. I haven't changed the setting of my phone during my trip neither, and my trip lasted from July till end of September.

I received no roaming charge in July and 1 roaming charge in August since I picked up an incoming call. I paid my August bill gladly because I used the service. The September charges were surprising. each was caused by 0.01-0.02 MB of data use. When I called customer service, the representative insisted that if there is usage, there is 14$ charge, and there is nothing they can do about it.

Is there any way to get those charge reversed? I am not sure if I am unlucky or lucky that I am not charged everyday during my trip? These data usages seem rather random, especially given I have not changed my phone setting after leaving Canada in July.

The September 28th roaming charge is also confusing since I arrived in Canada on the 28th. My phone was off before/during the 12 hours flight. I only turned it on after landing in Canada. Did the roaming charge got applied while I was in Canada? 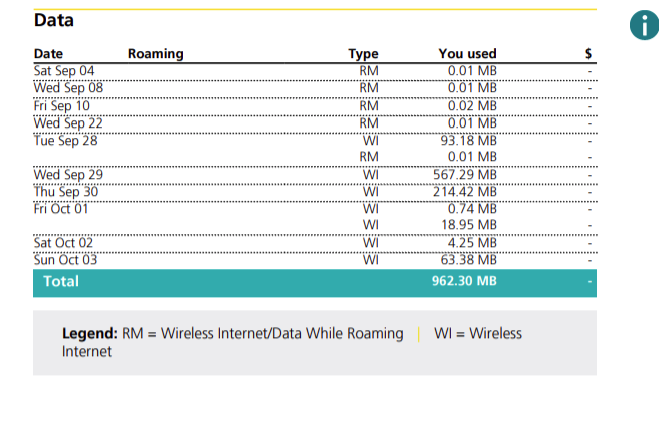 Hello @xd1 , sorry to hear you have roaming charges you weren't expecting. You will need to have a customer service representative take a look at your account for you. You can contact them on social media via Twitter or Facebook and save some time sitting on the phone, or call customer service on your device at *611 for account assistance. There are some apps that will try to connect to your data even if you have roaming turned off. Reach out to fido using one of the methods above and you will hopefully have it resolved to your satisfaction. All the best