I work at 100 King St W on the 50th floor beside a window. The Fido reception here is very poor and I can hardly use my phone for 8 hours a day. I barely get 1 bar in 3G and LTE and whenever I get a call, most often in drops in under a minute. Using data is almost impossible. Webpages and apps keeps showing the loading sign for a long time.

I have a work phone on the Telus network and it gets perfect LTE reception at the same spot. Please Fido, could you look into this issue? I have called you guys and you have sent some sort of a network refresh to my phone but it did not help.

I'm located at downtown Toronto and I have the same issue with reception .i used to be on Telus and got amazing reception in the building (Samsung S7) . Since switching Fido SIM cards and services my cell reception has been poor even though it say that I have 3 bars of service

Hi @dwong80. Welcome to the community.

We edited your post to remove your personal information.

We'll be sending you a PM to have a closer look. Talk to you soon.

That's interesting because there appears to be more Fido/Rogers towers than Telus in the area.

Is your work phone also an iPhone 6? Cellular reception on the newer iPhones has been less than impressive. Is it possible that your work phone's reception is better than your phone (independent of provider)? It's not uncommon for different phone models to have differences in cellular reception. For example, a professor at Denmark's Aalborg University tested the performance of various mobile phone antennae (see here). I'm not sure how much we can extrapolate from his data because Fido/Rogers uses mostly different bands/frequencies. However, it does illustrate the large differences between phone models.

saru
I'm a Participant Level 3
In response to Cawtau

Thank you for your reply. I dont think the issue is with my phone because I have a coworker near me, who uses the Nexus 6P on the Fido network. He too experiences the same poor reception as I do and he is actually thinking about switching providers.

My work phone is a Samsung S6 and its locked to Telus, so I can't pop my SIM in to test it.

I just tried the Fido-EXT suggestion and unfortunately I am getting 'No Service'. I tried to pick both options (not sure why there are two). 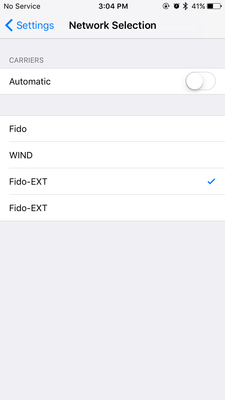 Senior MVP
In response to saru

I just tried the Fido-EXT suggestion and unfortunately I am getting 'No Service'. I tried to pick both options (not sure why there are two)...

There are two Fido-EXT because one of them is the Telus network and the other is Bell's network. The roaming agreements includes both of their networks. I'm guessing you're getting the No service because there are Fido/Rogers towers in the area. However, it could also mean that your phone's not able to receive their signal. Did you try the other Fido-EXT?


... Nexus 6P on the Fido network. He too experiences the same poor reception as I do ...

The Nexus 6P didn't fair too well in those antenna performance tests either...

I'm not saying that it is definitely an issue with your phones and has nothing to do with Fido. Admittedly, your work phone connecting to LTE is likely connecting to the closer Bell tower. There may be some optimisation that can be done on the Fido/Rogers towers that might improve the signal in your area.

saru
I'm a Participant Level 3
In response to Cawtau

Just heard from another coworker who has Rogers that reception is very poor up here. I dont know about Bell, but Telus seems to be the only good network on our floor.

Senior MVP
In response to saru

The nature of mobile phones is that they are dependent on cellular signals reaching the phones. Unfortunately, many factors can affect those signals from reaching the phones-- including proximity to cellular towers and interference caused by obstructions between the cellular and the device. That is why no mobile provider will be able guarantee their service.

In your case, I think a possible reason is the Rogers '3G'/LTE cellular tower is located on the roof of the adjacent concourse. Any signals would be directed outward and downward rather than upward towards the tower. On the other hand, the signals from the Bell tower might have a slightly more upward direction (Bell and Telus share towers). There may be some room to optimise the tower and angle the signals a little more upward.

If disabling LTE does not improve the situation, perhaps the moderators might forward your case to technical support to see if any optimisation is possible.

I recently switched to Fido from Public Mobile to take advantage of the 10gb offer. Now that I've been on both networks (Telus and Rogers) with the same phone (Samsung Galaxy S7 edge), I can say that it is extraordinarily disingenuous for Fido to blame the phone or any factor other than their network.

I live and work in the downtown Toronto Core and walk everyday down Bay Street from the Air Canada Centre to the Eaton Centre. I also work out at the GoodLife in the Bell-Trinity Centre.

Without a doubt, the Telus network gave me consistently MUCH faster speeds than the Rogers network. I find myself waiting a long time for simple pages to load or SMS to send, especially when compared to when I used Public Mobile. Oftentimes I just give up.

More concerning is that I simply don't have coverage in many areas where I had coverage before. In the Path, for example, there are many dead spots - specifically as examples in First Canadian Place, Bell Trinity, and Brookfield Place. In the GoodLife that I workout at, I used to get fast LTE. Now I get No Network.

The marked difference in coverage and speed, in 2018 in downtown Toronto, is unbelievable. I'll be switching to Telus as soon as they offer a new 10gb package. Stop blaming the phones and other factors. It's your network. Fix it.

I'm sad to see that you've been having difficulties with your network connection. We definitely don't want to see you go!

Are you experiencing difficulties with your data speeds everywhere or is this only happening in specific locations? Are you connected to LTE or 3G when this is happening? Does the same thing happen when you put your SIM card in another phone?

In the areas where you are losing connection, are these areas underground? It's important to remember that we're not able to guarantee any service indoors or underground as there are many factors, including building materials, that can interfere with the signal/

Hi Amanda. I'm getting fat slower speeds all around (above ground and below). I'm getting poor/no service below ground. I don't have another phone to test my sim card in, but when I put my public mobile sim card in my phone all of these problems go away. It's not the phone.

Are you still experiencing issues with the reception?

Let us know, we're here for you

Are you using LTE or 3G ? When you mention having slower speeds, what exactly are we talking about? Did you run a speed test? As for below ground, what places are you referring to?

Also, did you ever flag it through our Network Aid tool on the App?

saru
I'm a Participant Level 3
In response to saru 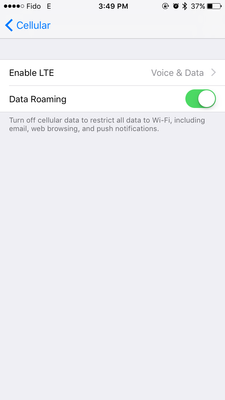 Living on the EDGE.

FidoClaudia
Moderator
In response to saru

Welcome to our Community!

Would you be able to disable LTE to see if that makes a difference when it comes to your reception at that location?

Test it out and let us know

saru
I'm a Participant Level 3
In response to FidoClaudia

Its like being in an elevator all day long.