If I’m in a weak coverage are I can no longer manually pick “Fido EXT” from the Carrier menu. That whole menu is gone after iOS 12 on an iPhone X.

Note about 3 weeks ago (pervious iOS 11) I did run into that bug where the phone will no longer connect to the network and you have to restore the phone completely from backup.

Hope its it’s not the same issue. At least this time I still have connectivity.

Thoughts? Was this a carrier update from Fido or iOS 12 issue?

We have good news to share: the new iOS update (12.1.1) restored the carrier selection option.  You just need to update your phone from iTunes or in your settings and you'll be able to manually select a network again!

Kraven
I'm a Contributor Level 2
In response to FidoJulien
Options

It does appear to be there. I would offer thanks on the quick fix, but we know thats not true, it was slower than molasses

cody_w
I'm a Contributor Level 2
In response to Kraven
Options

I would like to say thank you for resolving this major pain in the $% problem. It took much longer than one would expect, ideally it should never have happened in the first place.

Just last weekend I was cursing it when stuck in 3G by the Can/USA border and nothing would load. Now I can "temporarily" switch it to Fido-EXT and get full LTE speeds in these areas.

Nothing worse than being stuck in a border lineup trying to pull up your receipts on your phone only for the phone to kick over to Fido 3G and not want to load anything!

We totally get where you're coming from @cody_w. Had it been possible for us to fix this sooner, we'd have liked nothing better as well.

We're super glad that the issue has been fixed and you can now access the extended coverage when needed.

I can confirm after updating to iOS 12.1.1, Network Selection is now available under Settings > Cellular! 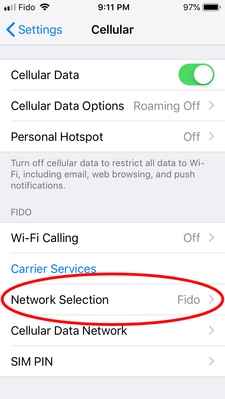 Quite annoying that this is marked as resolved - it's not.  The issue still exists.  Just because they know what the issue is and have plans to resolve it doesn't make it fixed.

This is still occuring, and a solution "by the end of the year" isn't good enough.

cody_w
I'm a Contributor Level 2
In response to swalker17
Options

Yes it is very annoying. Just yesterday I was out in the sticks and only had 3G and knew Telus had LTE coverage but I couldn’t manually switch to “Fido EXT”.

@cody_w wrote:.... I was out in the sticks and only had 3G and knew Telus had LTE coverage but I couldn’t manually switch to “Fido EXT”....

The domestic roaming deals were originally signed between Rogers (including Fido), Bell, Telus and Videotron to extend coverage and offer seamless roaming between carrier partners in areas with poor or absent service. If you have 3G coverage, you have coverage.

With android, I have never been able to register on Fido-EXT if I have adequate Fido/Rogers coverage. 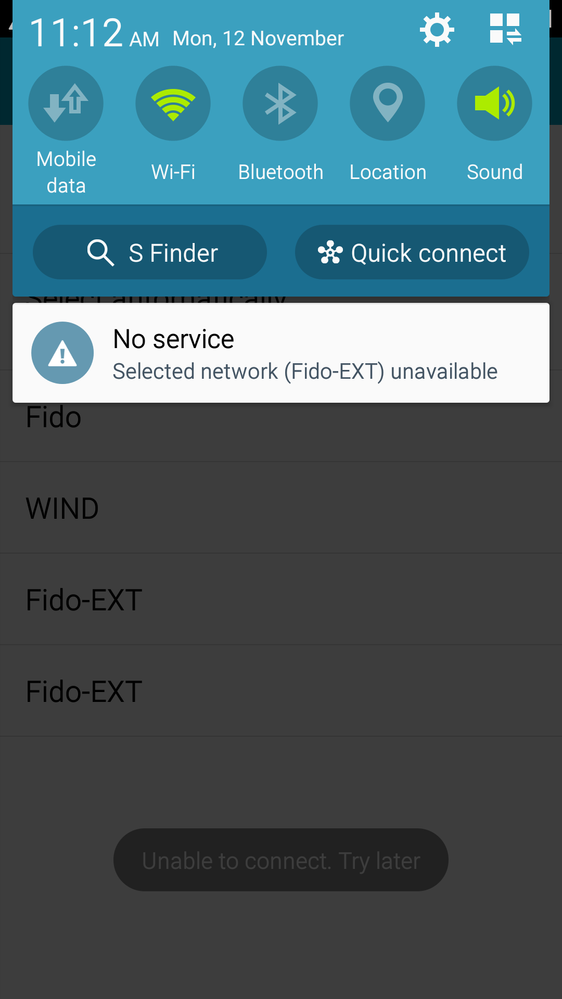 If I have poor or no Fido/Rogers coverage, I have been able to manually switch to Fido-EXT. However, if I do have home network coverage, the other providers simply refuse to register the device on their networks.

It's possible that Apple's Global database has been inadvertently allowing extended coverage use in situations where it was never intended.

As far as I am aware, the manual selection option is available when roaming outside of Canada. That further suggests that the issue has to do with the Canadian roaming agreements. I understand the option to manually select networks is available with the other providers. I'm not saying they shouldn't reinstate the functionality. There are certainly situations where it might be necessary to manually gain access to extended coverage. However, don't be surprised if the other providers find a way to restrict network registration if you have adequate home coverage. Don't you think Telus would prefer you pay them for using their services rather than Fido? After all, it is extended coverage, not alternative coverage.

I'm sure some people will disagree, but it is something to consider...

cody_w
I'm a Contributor Level 2
In response to Cawtau
Options

I doubt it would be a loophole for 3 years.

And with Fido, 3G is NOT coverage. Especially as Fido has said they will correct this by the end of the year.

I define coverage as the ability to browse the web and check my email. Fido 3G in many parts of BC doesn’t offer that. So to you 3G may mean coverage, to me it means switch to Fido-EXT.

or or I’ll switch to Telus or Bell permanently.

If you're in an area where we offer coverage then connecting to Extended coverage would not be an option as we offer service in that location. For info on where extended is offered we suggest checking out coverage map here

This said, 3G coverage does allow you to browse and use your phone just like you would on LTE; although speeds may be a little slower you're still well within coverage and this should not prevent you from using your services.

We'd really hate to see you go over this and we can look into why your 3G service was not working well. We'll send you a PM

And to Telus, that might mean breach of roaming agreement...

As previously mentioned, I don't think it's Fido or Rogers who do not wish you to use the other networks while within their coverage. It's more likely the other networks who would like to prevent unnecessary roaming. Just because Fido/Rogers say they will reinstate the manual selection functionality does not mean Telus (or Bell, or Videotron) won't find a way to restrict access on their networks if within Fido/Rogers coverage. They already do with android.

chrisck
I'm a Contributor Level 2
In response to Cawtau
Options

This doesn't seem to be an issue with Telus/Bell but rather with an interaction between iOS12 and the Rogers/Fido carrier settings. The functionality is still there on iPhones on the Telus and Bell networks and in fact on my iPad on the Fido network.

Additionally I might add that I have areas where I work where there is no Fido data connectivity at all, but that as long as there is a single bar of cell service the phones will not roam onto the available Telus network so it's definitly an issue for me.

cody_w
I'm a Contributor Level 2
In response to chrisck
Options

If this functionality is not restored by Dec 31st I will walk with all of my lines over to Telus or Bell.

You broke it, fix it.

We replied to your PM

Kraven
I'm a Contributor Level 2
In response to FidoCharles
Options

Well after 20 years of Fido service I’m ready to leave for bell. Basically this issue is a deal breaker and honestly it should be a really easy fix. But yet again Fido proves unable or unwilling or just doesn’t give a about us the customer.

Good bye fido your poor service is driving a loyal customer of 20 years away.

The option to select the network is still available when you're roaming so you can still choose the roaming network you want to use.  When you're on our network, the phone always prioritize our network and will automatically switch to the extended network when if you travel to an area where the Fido network is not available.

cody_w
I'm a Contributor Level 2
In response to FidoJulien
Options

The key part of the problem is when we are in a low quality Fido coverage area. Such as 1 or 2 bars of 3G.

We we want the ability to chose, like we’ve always had. We have had this for years until your iOS 12 carrier update. Everyone who put-off upgrading to iOS 12 still has this capability!!

As we mentioned, we're working on adding this feature back.  When the features becomes available again, this thread will be updated.

Kraven
I'm a Contributor Level 2
In response to FidoJulien
Options

Again all the other carriers can accomplish this. Weeks months is patently pathetic and again shows poor customer service.  Too bad your loosing customers to the competition for something that is easily fixed according to apples tech support.

@Kraven There are two groups wanting this functionality restored. You apparently wish to manually select the Fido network to prevent roaming. On the other hand, there are others who wish to selectively roam when they are not happy with their coverage.

@cody_w I'm sorry, but you're the one who seems to be missing the point. Extended coverage use is only meant for when you don't have Fido/Rogers coverage. It is not meant to be used simply because you do not like 3G coverage. Just be cause you've always had the ability to choose doesn't mean you were supposed to have been able to choose. Again, it's extended coverage, not alternate coverage. Have you considered that after all those years, Telus (or the other providers) might be pressuring Fido/Rogers to limit unnecessary roaming? If you regularly are in areas where you do not like Fido/Rogers coverage, perhaps they're not the right provider for your needs. It's a common misconception that any provider will suit everyone everywhere.

Again, I'm not saying that they shouldn't reinstate the functionality. However, it's a little more complicated than merely adding it back. Measures will likely need to be added to prevent the misuse of unnecessary roaming.