Armani
I'm a Contributor Level 2
In response to AndyIo
Options

This is really dissaponing, you are absolutely right, its been a year!

I'm hoping that NFC SIM cards are available eventually. Be great to tap and pay using a phone.

Armani
I'm a Contributor Level 2
In response to Frozen_
Options 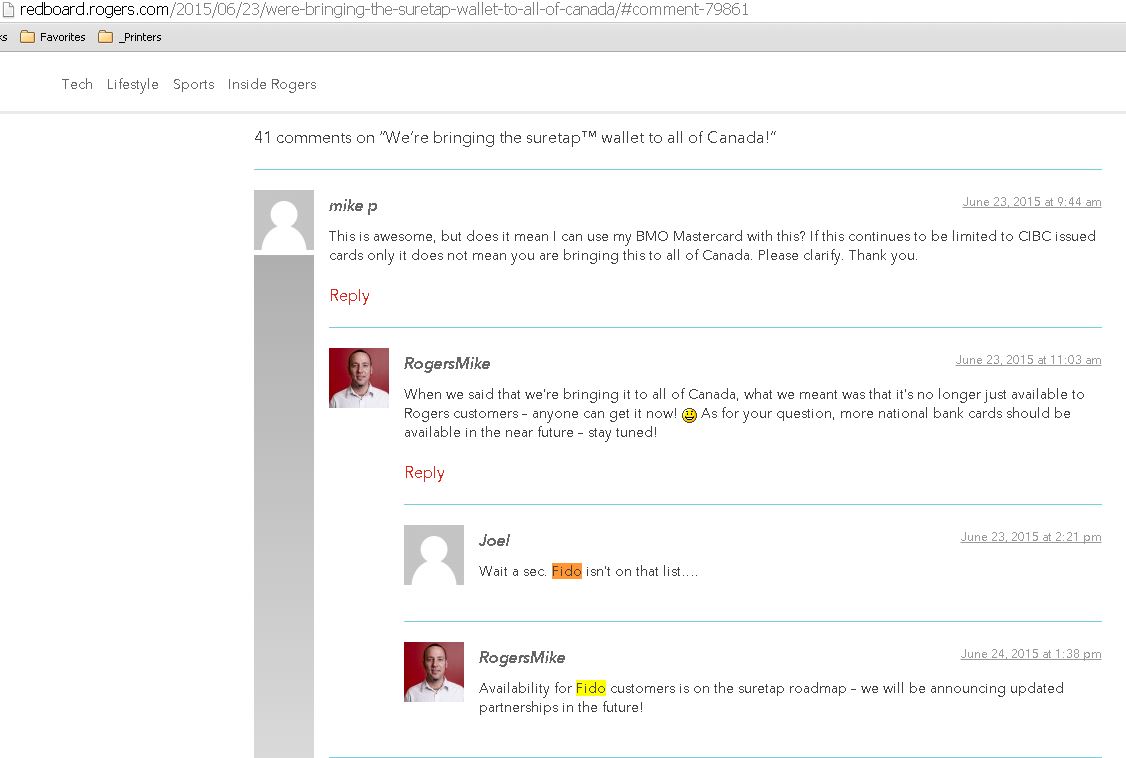 hey_tommy
I'm a Participant Level 3
In response to Armani
Options

Armani
I'm a Contributor Level 2
In response to hey_tommy
Options

ciao_hi
I'm a Contributor Level 1
In response to Armani
Options

JFairweather
I'm a Participant Level 2
In response to BenStolin
Options

A representative with TD technical support just confirmed that the only providers they support are Bell/Telus/Rogers.  Kodoo, Fido or any other discount providers aren't compatible at this time.  I requested they add Fido, and he said they were working on it, but no ETA at this time.

That would be nice if Fido introduces the NFC SIM Card. TD bank hooks up with Rogers while RBC hooks up with Bell. Fido should do the same as Rogers. Other than file/calendar/pictures transfer, the NFC should be widely used for tap-to-pay. For now, Tim Horton is the only place where I can tap my Blackberry Z10 to pay. I would like to use NFC payment for more stores.

Maybe I have no idea what I'm talking about, but isn't there services like google wallet or I heard paypal wallet or many others similar services that you can link to your bank account or credit card? So you use those services instead? I'm not talking about some random app on the internet, im talking about google or paypal.

But again, I never used NFC but I get how it works, but wouldn't  apps like google wallet or similar be a workaround?

Google wallet (tap and pay) is not available in canada. as toi this NFC sim? what is is exactely? the link prvided is just marketing BS (nice secure and unicorns) , no technicalities (how does it work? why the need for a that special SIM card ..etc).

Oh by the way, want NFC thinggies? plenty of cards (physical separate cards) that do that, why not use them (as in the end you need a credit/debit card to tie to, no matter what). From safety POV: something about eggs, and a basket.

mikekay
I'm a Participant Level 2
In response to kenshin33
Options

Another classic -- We pay less so we dont get anything.

Was hoping I could add my visa id on wifes phone for points!

eresc
I'm a Participant Level 3
In response to mikekay
Options

I can see that Rogers sells nfc sim cards:

No info on that yet!

Galaxy s5 doesnt seems to be supported with td yet . But if fido doesnt have nfc sim card when it will im switching to telus . Kinda sucks that fido always get the goodies months after rogers when its the same company ! I just like having those gadget and nfc payment with my phone is too cool to stay with fido .
2 Likes
Reply
Go to solution

raynoldt
I'm a Participant Level 2
In response to uyyut123
Options

What do you mean by NFC sim cards?

There are no NFC Sim cards on the market globally, and would make little sense to have these.  NFC cards and NFC phones are already on the market.