I've been doing most of my SMS texting using the Windows/Android MyPhoneExplorer (MPE) combination for about 7 years. I've done this with various phones:

All except the GR5 have allowed me to switch between the phone's keyboard and MPE on Windows without prompting. Here is what I get (pretty much) every time I use MPE to send a text on the GR5 (this shows YAATA but is the same for all SMS apps with that app's name instead of "YAATA"): 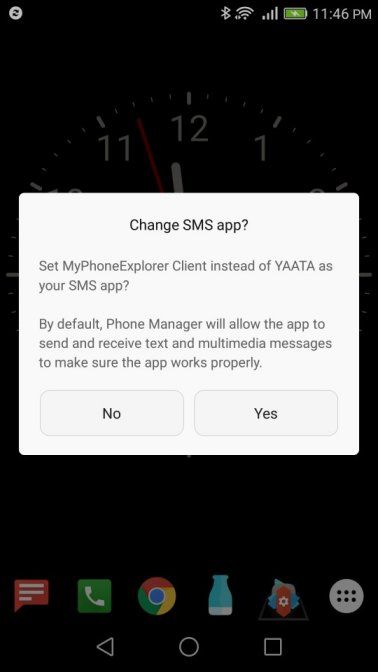 If I don't use MPE for a while, I get another prompt, pretty much exactly the same except reversing "MyPhoneExplorer" and "XXXXX" to switch back to the phone keyboard. Effectively, I have to answer the prompt on the phone every time I send a message using the computer. The ability to manage text messages using a PC is why I've been such an ardent fan of MPE; this issue defeats a large part of that advantage.

Is there any way to get the GR5 to just use any or all keyboards I've made active in "Language & input methods" settings?

Any and all light anyone can shed on how this can be fixed is appreciated.

Rather than doing any software updates for your device, have you done any recent updates of the app itself? If you have, did this start happening after the update?

Have you tried uninstalling and reinstalling the app?

deafwiggle
I'm a Contributor Level 1
In response to FidoAmanda
Options

Thank you for your response.

I purchased the GR5 about two weeks ago; this is the first version of MyPhoneExplorer I've installed on it. Also, this is the same version of MPE as is currently on my other three Android phones I've noted in my original post. None of those other three Android (4.0.3, 4.4.2, 6.0) phones are exhibiting this behaviour - they are all behaving correctly (they allow the use of either the phone or MPE to send SMS text messages without having prompts disrupting things).

Thank you for suggesting uninstalling and re-installing MPE. I've now done so; no change. :robotsad:

In seven years of using MPE with four other phones, this is the first time I've encountered anything like this.

I'm still looking forward to a solution to this.

@deafwiggle Since the issue seems to only be happening with that specific phone, I'd suggest contacting the manufacturer directly. Have you already tried?

deafwiggle
I'm a Contributor Level 1
In response to FidoMaria
Options

@deafwiggle Since the issue seems to only be happening with that specific phone, I'd suggest contacting the manufacturer directly. Have you already tried?

Thank you for your suggestion, Maria. Success rates with negotiating things like this with manufacturers have not been great, but I haven't had the opportunity to do so with Huawei. Fingers crossed.

Have you always had this issue on your phone or could it be since an update?

Are you experiencing the same issue if you try from other phones?

Also, have you tried to reach out to the app developer to check if there's something on their end that could cause that?

deafwiggle
I'm a Contributor Level 1
In response to FidoPamela
Options

Thank you for your reply, Pamela.

I mentioned in my original posting that this has never happened before with any other Android (or, even non-Android) phones. I still have all the phones mentioned, and none of them have or continue to exhibit this behaviour. It's only the GR5.

I purchased the GR5 about a week ago. I have not done - nor want to do - the OTA update to Android 6 (I purchased this phone specifically because it runs Android 5.x and want to keep it that way; eliminating or getting around the persistent, annoying prompts to do the OTA will be dealt with eventually). The only updates I've done are those prompted for via Google Play (which I always do on any Android phone I use).

I highly doubt this is an app (MPE) issue; the prompt is from Android, and the GR5 is the only difference between its implementation on the phones I've used it with. As I said, I've been using MPE for over 7 years now; the GR5 is the first phone on which this behaviour occurs.