“Visual voicemail is currently unavailable “ error  on iPhone  (prompting to call for message retrieval ).  Is this a known issue or is it just an issue with me?

Dont know how long it has been “unavailable” was fine yesterday ? I’ve done a restart which hasn’t fixed the issue.  Anybody ?

Can you do a reset of the network settings to see if that fixes it?

To do the reset, go to Settings - General - Reset - Reset Network Settings.

Keep us posted on how that goes

The “unavailable” happened again , so I did a network settings reset as you suggested and that seemed to fix it.

Im still unsure what is causing the issue though . It’s happened two days in a row now ( and around the same time too) , but the network reset seems to correct it anyhow.

I took a screen shot of the error just FYI 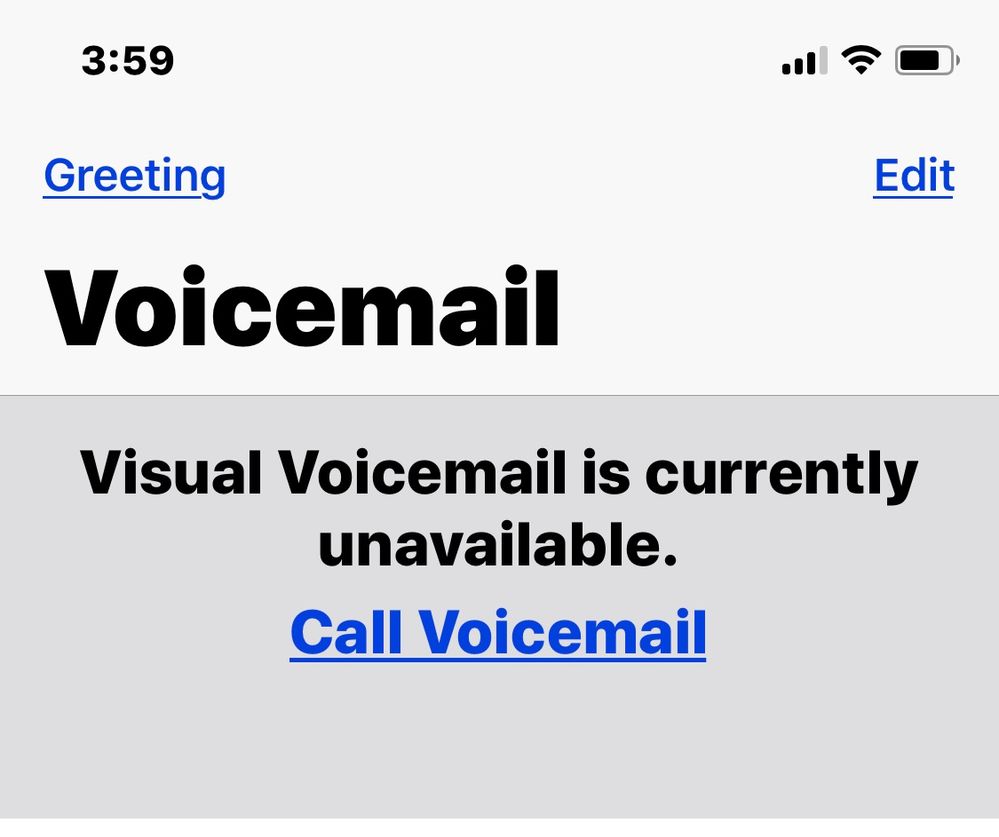 That's a bit strange. Did it happen in the same location and were you on WiFi both times?

iOS 11.1.2 was just released today, you might want to update the software to see if that fixes the issue permanently.

Keep us in the loop if it happens again!

It’s happened again and I have figured out what the common denominator has been for triggering this issue.  It appears that it happens after i have resurfaced from being in the subway ( “no signal” zone obviously lol)

i commute by subway to/from work - so having to reset network settings twice a day is a “work around” (short term) but not a fix.

This was never an issue in the past , I like to think that it’s just coincidence that it began once I switched to iPhone X. I am up to date on iOS (11.1.2) and have not had any carrier update notification ... so I am not sure what to do ?? Maybe I need to do a “resend to switch” ?

im going to call in to tech support and see if they know what it is , maybe a “resend switch  “ will fix it for good ? 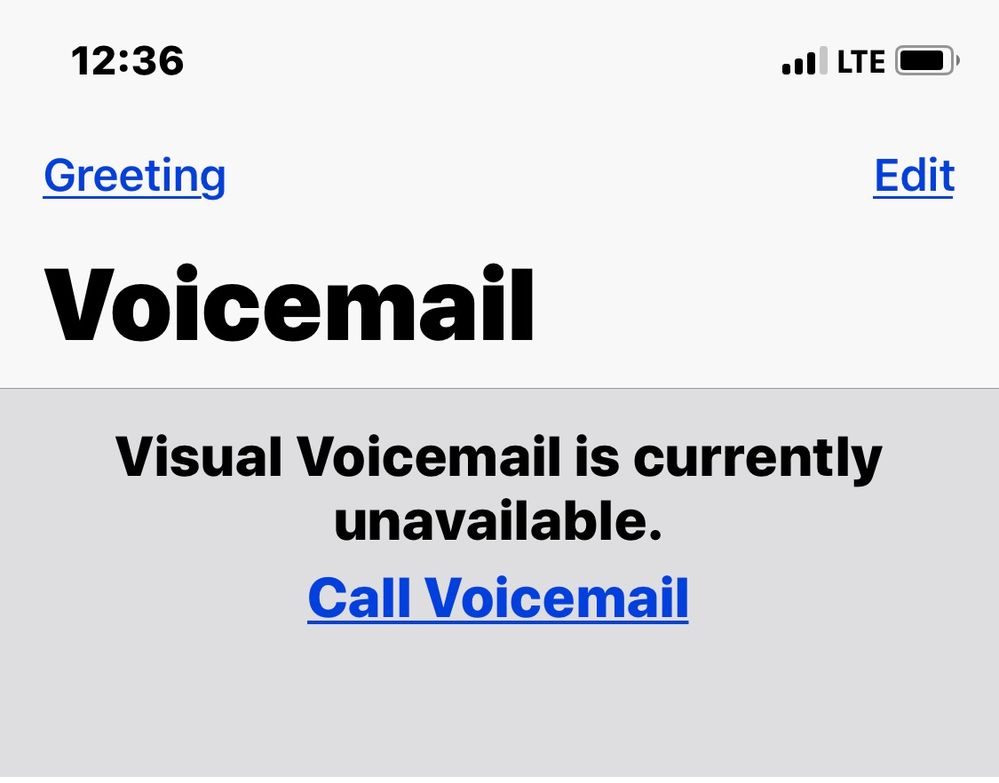 Can you tell me what Carrier version you're on at the moment? Also, did we already reset the network on our side? Let me know if it wasn't already done and I'll send you a PM

hi there. I’m version 30.1(carrier). I called in to fido after posting that and after a 30 min wait time , proceeded by a 4 min conversation the agent transfers me to tech support.  Then I had another 20 min wait and turns out that agent cold transferred me to “Rogers tech support” ( which annoyed the tech guy) and resulted in tech guy saying  “hmm that is strange (my issue) and he has very limited access to fido accounts and cannot really help me” but he did ask his tier 2 if they could offer any suggestion and end result was

so I called Apple support to see what they had to say and Apple asked why the carrier hasn’t done a reset for me that they (fido) needs to do network troubleshooting with me and shouldn’t be so quick to send me to Apple.  He said “tell your carrier to reset network from their end”

Sooooooo I called 611 to ask my carrier to do a reset for me and of course ..... there IS NO WAY TO REACH TECH SUPPORT AT FIDO BECAUSE “OUR OFFICES ARE NOW CLOSED”!!!!!

I am so frustrated right now and feel like throwing my phone against a wall ! ( but apparently it’s not as “durable” and “break resistant” as Apple has claimed it to be !!)

i dont know what what to do next and I don’t have time to keep spending on the phone with Fido/Apple ! I don’t know whether to scream or cry at this point !!🤬🤬🤬

but thanks for asking @FidoClaudia

everything is pointing towards it being a network issue.. not Apple/ my device.

⬆️ Look at my signal icon

Senior MVP
In response to redzzzz

everything is pointing towards it being a network issue.. not Apple/ my device.

I'm not sure this problem relates to a network issue per se. It sounds like your phone might be having problems connecting to the network with low or weak signal.

If this is the case, it might be related to Apple using different components for some of their variants. Some of the iPhone Xs have a Qualcomm modem chipset (A1865) while others have an Intel modem (A1901). Apparently, at least with iPhone 7, users with the Qualcomm chipset experienced significantly fewer dropped calls, better reception in low-signal areas, and faster data rates than those with the Intel chipset (see here and here, etc).

It appears as though Canada receives the A1901 from Apple (see here).

In addition, you should note that it's not uncommon for different phone models to have differences in cellular reception. For example, a professor at Denmark's Aalborg University tested the performance of various mobile phone antennae (see here). I'm not sure how much we can extrapolate from his data because Fido/Rogers uses mostly different bands/frequencies. However, it does illustrate the large differences between phone models.

Furthermore, different phones might illustrate the signal strength differently. There is no industry standard that relates cell phone signal strength to the number of bars on your phone.  For example, the same signal strength (-90dBm) might be shown as 3 bars on one phone and only 2 bars on another phone. It is far better to compare the actual decibels. -50dBm is great signal or full bars. -120dBm is very poor signal or a dead zone.

I'm not sure how all this relates to your Visual voicemail issue, though. Since you noticed it mainly happens when you resurface from the subway, it's possible your phone is having trouble reconnecting to the network. Are you able to use the other services (calls, SMS/MMS, data) when you try to access your voicemail?

That was a whole lot of information -  I’m not exactly sure what value/relevance the Danish experiment and the chipset/modem and bandwidth/signal specs have in what is happening here.

If you have read from the beginning of the thread , you will notice it began as visual voicemail unavailability ( and plz notice the signal on the screenshots I posted of the vm error ... this would rule out that it’s “my phone unable to connect on a weak signal” theory)  I am in no way saying that this issue I am experiencing is caused by Fido specifically. Clearly it is something going on with my phone and network settings/connection ... but until a fix has been found there is no way to know where the issue stems from. My post lastnight was regarding my attempt to get My network reset FROM FIDO END and how it has been a cause of frustration.

From the very beginning every moderator in here has suggested I get a reset on fido end - and i am trying to follow this advice by calling in and it seems that call centre is not as easy to deal with.

I called in and have no way to go direct to tech support ( used to be an option “press 3 for tech support”) now it’s all one que ( with extremely lengthy wait) only to be put back in another que.

My rant (post) was expressing my frustration with call centre issues. The knowledge/willingness to help/efforts to resolve and overall experience shown in here (community) are VASTLY different than that of the call in route !! It’s just some times calling in is better way to get the system process done — or so I once thought.

I do do appreciate what you were trying to suggest about device antennae and display differences. That makes sense but in this situation it is not relevant.

Just fyi FYI here is a screen shot of my signal right now.  And I am in the exact same location ( at my desk at home) as I was lastnight when I mentioned the low signal (I just mentioned it as possible evidence that indeed a network reset may be a good idea — but not something easily done !) 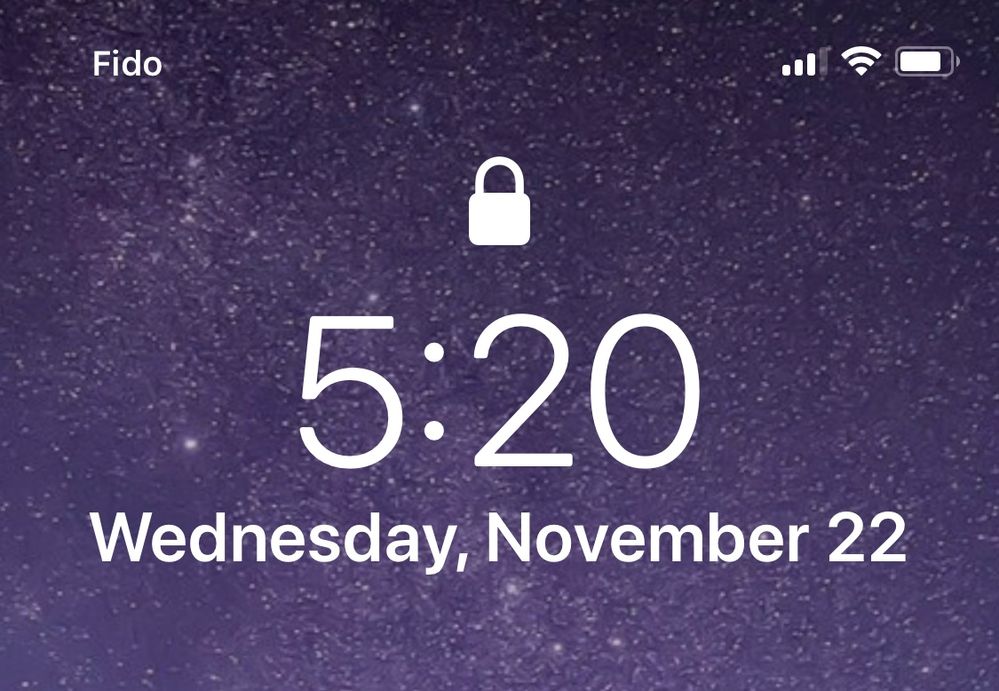 We definitely don't want  you to scream or cry. I would like to take a look at your account to see what was done so far.

I'm sending your a PM. Talk to you soon

I always have my data on I just happen to be home when I look at my voicemail (hence the wifi icon). But my data is always on ... and happen to be in wifi zone (home) both times I have seen this error.  I’ll do the iOS update now ... hopefully it addresses several of the X bugs ( 😬) ....if the error happens again I will try turning off wifi and see if that changes it.  Possibly a wifi/data (both enabled) issue.

Sounds good @redzzzz, let us know if the updates help

Glad it's working again! I really hope you won't encounter any other issues, @redzzzz!

Keep us posted if anything though

Never mind. It seems to be okay now

I'm happy to hear it was resolved!

What was the problem?

Let us know what your solution was, I'm sure it can help others!

Now I can’t delete messages in visual voicemail.  I swipe then hit delete ... it disappears for a second then reappears again in inbox

Can you do a reset of the network settings to see if that fixes it?

To do the reset, go to Settings - General - Reset - Reset Network Settings.

Keep us posted on how that goes

Before trying the reset , I just went to try to delete again , and It’s working normally now.  If it happens again I will try the network reset to see if that solves anything.

It’s entirely possible that the visual voicemail issues are my phone.  I’m using the iPhone X and it’s definately not been a problem free transition. So wouldn’t surprise me if it’s a “bug” ( I’m getting used to them ! 🙄)

I’m not sure what happened.  My data is always on and have never seen this error on visual voicemail before.  So I don’t know what the cause or the fix was .....it was still showing error after I did restart also.  So it’s hard to know what caused it ... Just glad to know it’s no longer ( no longer an issue ) 😙