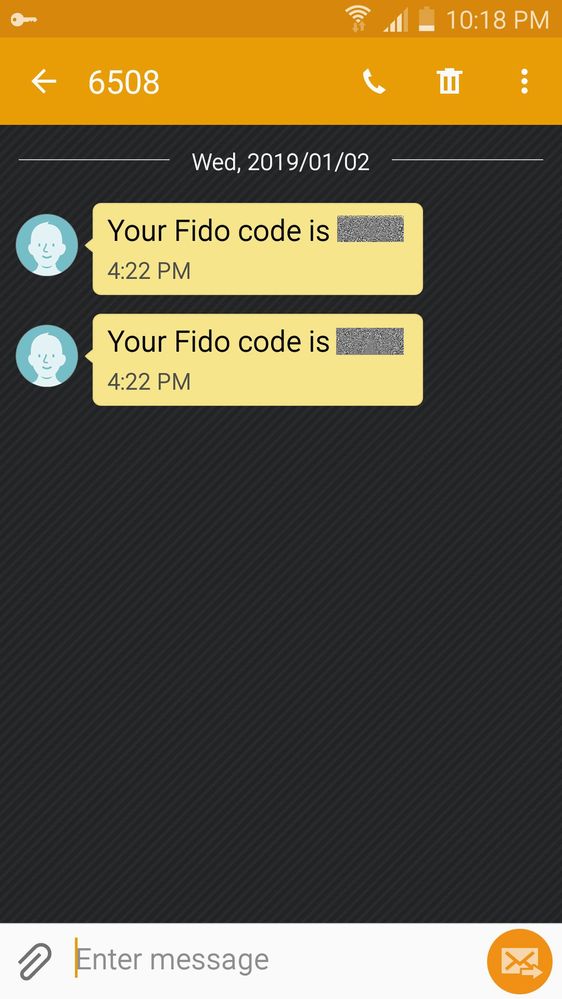 i have seen this too, it is spam, remember to 'trust no one' on the web.

This message is not from us. We would suggest forwarding the message to 7726 (SPAM), and avoid clicking on any link (if applicable). You can then safely delete the message. For more info, visit this page.

We would also invite you to communicate with us here if you'd like to review your account's security settings.

Hope this clarifies, and let us know if you have any questions.

Okay, thanks! It just seems weird to be SPAM. There are no links; just the 4 digit codes.

I just wanted to come on here and let you guys know that we double checked this for you guys and we can confirm that these messages are in fact from us. These messages are authorization codes sent via the My Account app in order to confirm that you are the user of the line for which you are attemting to gain access to the app to view account details. See photo:

The short code from which these authorization codes are sent is 6508.

We're sorry for any confusion this may have caused!

Thanks for the clarification!

I do vaguely remember having to enter a code when I first installed the app. I have checked My Account on my phone and online and everything appears normal. The photo provided shows that one must manually enter the phone number to receive the code. It's also possible that someone mistakenly entered their phone number incorrectly when trying to first set up the app on their phone.

It's definitely possible that those messages were sent to you accidentally by another user attempting to set up their My Account app access.

Glad to hear everything is good with your account!

woodtoo1
I'm a Participant Level 2
In response to FidoAmanda
Options

I received four codes in one text. What is the best and worst case scenarios?

Should I be concerned at all?

Anybody attempting to gain access to your account through the myAccount app would need those codes to login. Since you are the one that receives them, you shouldn't be concerned at all. Nobody will be able to access your account without those codes.

woodtoo1
I'm a Participant Level 2
In response to FidoPhilP
Options

Thank you. One more question, why were these codes sent to me and by whom?

These codes are generated by the system when you attempt to log in to the app; they are sent to the phone number you are trying to login with for validation.

woodtoo1
I'm a Participant Level 2
In response to FidoRachel
Options

@woodtoo1 , I would suspect that someone has either (a) inadvertently mistyped THEIR phone number while attempting to log into THEIR account, hence the 4 in a row, as they did not get them, then finally realized their error, or (b) someone is attempting to gain access to YOUR account, not knowing that the codes are sent to YOU and not displayed locally to them.

In either case, because they are indeed FIDO messages sent directly to the number affected (YOURS), your account is safe and there is no need to be concerned, unless you have some strange person leaning over your shoulder right now reading the codes!! 😉

I had a spate of FIDO account codes texted to me about 4 months back, and it was someone mistyping their phone number, I know this because I ended up with several calls for this person as they were giving out their wrong phone number (mine) and I was getting weird calls.  I little sleuth work, and I texted the person, who has same 7 digits, just a different area code, who had just moved and gotten a new number, so it was an innocent (albeit annoying) mistake!