Disabled FM radio on my Samsung A5

I am so disapointed to find out that my

new Samsung A5 (2017) phone has disabled FM radio chip, while it would have been enabled if i'd bought it somewhere else than at Fido's. I feel completely cheated: why should I pay to listen to the radio on internet while my phone is supposed to syntonize to fm radio by itself?

unfornately I got blocked out and had to go back to the stock 520W rom.

these new phones suck... but the hardware is EXACTLY the same.... both samsung and canada carriers are colaberating to block FM

A5Owner
I'm a Participant Level 1
In response to Tac21
Options

This is unaccetable. When I decided to make a purchase, the display obviously had the FM radio icon shown, GSMArena specs sheet also shows FM radio is part of the feature. But my A5 newly out of the box does not have it. NextRadio cannot detect and install accordingly. Major annoynce.

Jaysfan12
I'm a Participant Level 1
In response to A5Owner
Options

...that is because the FM chip allows for data transmission. It is turned off because the carriers want you to pay for data.

I understand it has been claimed that the Samsung A5 (2017) from other providers includes the FM radio. Have those claims be verified by people who actually own those devices? Searching other forums for news regarding the A5 suggests the device from other providers also does not include the radio. In fact: 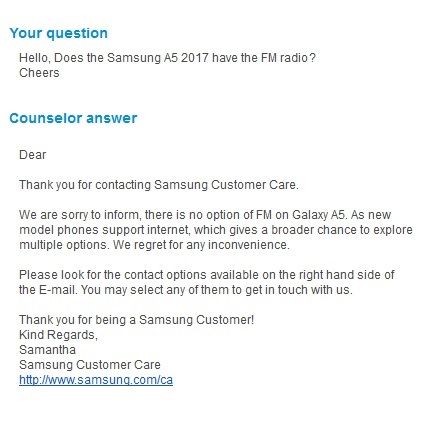 I do understand where those claims might have originated, though. Doing a little leg-work, the demo versions (SM-A520X) in the stores do show the FM radio app. However, that version is only for demonstration purposes and would likely include the FM radio app because it also has to represent the F, F/DS, and K/L/S versions. The actual version offered through the other providers is the same Canadian version, SM-A520W, and does not have the FM radio.

Chazc7zz
I'm a Contributor Level 1
In response to Cawtau
Options

Check more closely this FM chip is disabled only on the Canadian version. All other countries are enjoying the FM radio. A friend has it unlocked and it has FM. A friend loaded  the software  version for U.K off sammobile they have the radio. Canada carriers  asked Samsung to kill the radio  chip.

El6
I'm a Participant Level 1
In response to Chazc7zz
Options

So did you use sm-520f firmware then?

MVP
In response to El6
Options

The FM radio chip is there in the phone it's just locked read this thread here over at XDA.