roaming charges and how to disable roaming

currently, I am out of Canada, I want to know how I can stop fido roaming,

when I left Canada I activated wifi calling and put my phone on the airplane phone.

but after coming to my home country I switched my sim card with a local card and put my fido sim in another phone (iPhone 7 plus).

after turning on the phone I got a local network on my fido card(international roaming activated automatically). and I got a text from fido that roaming is activated and 15 cads plus tax charge will be applicable. but quickly I activated wifi calling and put my phone again on airplane mode. now I am using fido with wifi calling only.

so my question is will fido charge me 15 cads for all days I am staying in my country? or I will be only charged If I use a roaming network? and if yes how can I disable roaming? 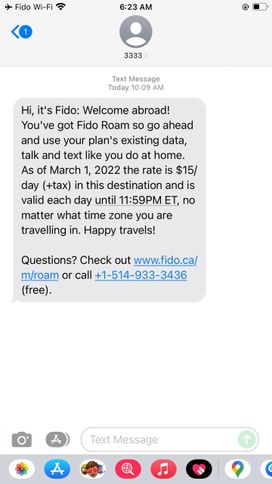 Firstly, Fido Roam charges will only incur if your phone uses services -- make or receive a call, send a text message or use data abroad. It should be mentioned that while receiving SMS would not incur the roaming charge, any data contained within MMS (incoming or outgoing) would be considered roaming data and charged accordingly. You should note that MMS are not solely restricted to pictures or video messages. Messages with subject headers or group messages etc are also considered MMS.

You might consider disabling any MMS auto-retrieve settings on your phone. You would then receive a SMS notifying of a MMS (no charge) but the data contained would not download automatically. You could then choose whether or not to download the associated data contents. You should also note that, with the exception of Wifi-calling, MMS does not generally get transmitted via Wifi. Downloading MMS while connected to Wifi would likely incur roaming charges. That said, if your device is supported for Wifi-calling, some types of usage would be considered roaming.

There has been misconception circulating regarding automatically incurring roaming charges for simply receiving that text message. I can attest that simply is not the case. I was fortunate to have been able to travel to the US as well as the UK recently. When my device connected to the foreign networks, I received the Fido Welcom messages:

To be sure, I verified my bill corresponding those travel dates and there were no Fido Roam charges:

So, merely receiving those Welcome messages does not incur Fido Roam charges. I understand people have incurred roaming charges seemingly upon receipt of those messages. However, it's likely their phones also used data to update their systems and/or apps when connected to the networks. I understand some people have had their data and/or roaming data disabled. However, people need to know how their devices behave with those settings disabled. As mentioned in some of my previous posts, some phone manufacturers might consider system data differently from user data and allow the former usage despite those settings.

For myself, I kept Airplane mode enabled for the duration of my time away (except for intentionally disabling to connect to the local networks). As with yourself, I also used Wifi-calling while abroad. It is important to note that some Wifi-calling usage is considered roaming and would incur roaming charges. Again, I can attest that using Wifi-calling to make and receive calls to Canadian phone numbers while abroad does not incur Fido Roam charges.

Apologies for the lengthy reply, however, it was the perfect opportunity to clarify that Welcome message and alleged automatic roaming charges. So, provided your phone does not use services on the foreign network (keep Airplane mode enabled) and your Wifi-calling usage abroad is not considered roaming usage, you should not incur Fido Roam charges when abroad.