Worst Customer Service Experiences. Get extra charges for being loyal!

I have been a loyal customer of Fido ever since I came to Canada (July 2018). Well, that was my biggest mistake I reckon. My original plan was 2 GB for $45. The person who sold it, told me that the plan was originally for $55 but he already had applied the discount. The first bill arrives, it was for $55. I called Fido, explained the situation for 1 hour but anyways got that corrected. The rep told me that the notes have been added. The second bill, it happens again. The bill comes for $55. I called in again and after explaining everything and wasting my time, the problem gets resolved the second time. The rep tells me that the notes have been added again. I assured that this won't happen again. The person assured me that it was all taken care of. Guess what? Third billing cycle, it happens again. I was so frustrated at that point that I decided to talk to the manager and then waste another hour and a half of my time (during the time I was both studying and working), and then the third time it was OK.

Then next year, I received extra charges on my bill for using more than 500 min. I wasn't aware of the minutes and after talking to the reps I learned than I had 500 min per month. Well, fair enough and I paid the bill. I started keeping an eye on my minutes usage. After a few months, I was close to passing 500 minutes, which was when I asked my friend to give me a call back so I don't get charged extra. She called me and we talked and later I checked that my minutes were more than 500. I called Fido and they told me that it was because even the incoming calls were charged. No rep told me at the time I was previously charged extra for exceeding my minutes that even the incoming calls were charged. I insisted to talk to the supervisor after wasting some 2 -3 with different reps (one of them just hung up on me). The waiting time was 2 days ( this verifies how efficient Fido is -either almost everyone's complaints weren't resolved or there are no efficient people on the team). Nevertheless, the supervisor was rude to me and she failed to resolve my complaint. I decided to escalate it further and talked to her manager. After almost 4-5 days of calling Fido, the manager was able to give me discount of $10 on my next bills till December, 2020. I thought that the $10 could make up to the extra money I paid on my bills. So I took it.

Last month, I called Fido to see if I could get any better plan. I talked to the rep and he told me that I could get additional 2 GB for 2 months. Taking my history with Fido into consideration, I asked the rep multiple times that it won't affect my bill and that he was only adding the 2 GB. He confirmed. To have triple quadruple assurance, I asked him if I would be paying $39.55 (including taxes) in total for the next bills and nothing extra. He confirmed to that. Guess what? This time my bill was about $22 extra than I usually paid. It was for $61.79. I called the first time, explained my situation to the rep. 45 and going she put me on hold and came back to tell me that the discount was extended. I asked her that I wished to know why the extra charges were there on my bill and that lady hung up on me. I waited for her call back but didn't receive any. She did it on purpose of course. I call the second time and after talking to the rep, complaining about the previous rep, and explaining her everything, I told her that I wished to talk to the supervisor. She said we are 5th in line. 40 min went by, she updated that we are 3rd now, and after 15 more min, she updated me that we were next in line. I waited patiently with her. After 1.25 hr, she tells me that I have 2 options :

1: I could wait another 45 min on call and talk to the supervisor the same day. Or

So she was intelligent enough to keep me waiting for 1.25 hr only to tell me that I'll have to wait another 45 min or 2 days. I went with the first option. After 3-4 min, she told me that she'll transfer my call and not wait with me (her shift must have come to end). 3 hrs went by and still no answer. It was way past 45 min. I had to hang up as it was past 9. My brother told me that waiting now was in vain. The next day i called another rep and asked her directly to arrange a call back from the supervisor. She told me that I had to wait for 25 in order to have a supervisor call back. I did so and after a day, received a call back. For the fourth time, I explained my situation to the supervisor. I just wanted to pay $39.55 for my bill and that's it. The supervisor said that an email was sent to you that your plan was changed and on the new plan the discount wasn't applied. And there are pro-rated charges to change the plan. So I told him that the rep didn't tell me that he was changing my plan or that I would be charged extra. After about 40 min of going in the loop where supervisor told me that he could only reverse $10 and not the entire amount and I wanted to pay only what I rightfully deserved to, he told me that in my next bill I'll see the refund. I confirmed with him if I'll be paying $39.55 for this month, he said yes. He took off the discount as either I could get that or get a refund. I went for the refund and planned to change my carrier. After 5 business days when I didn't see any change in my bill, I called AGAIN only to hear that I'll have to pay $ 61.79 in entirety and hope that the next bill adjusts the extra cost. The rep told me that it was $10 I would be refunded instead of $22 ( the total extra charges). I felt so harassed and frustrated that I decided to pay it off.

It has been the worst form of customer service that I received from Fido. It feels like they fraud with you. They say something and do something else on the account which the customer has to pay. I'm so fed up and I really hope no one else goes through the same situation. I would atleast never ever recommend it to my friends, family and acquaintances. Already saved one of my friends lately. Atleast I know which one is the worst!

Thanks for repaying my loyalty with annoyance Fido!

Below is the screenshot of my 3 hr long call wait. 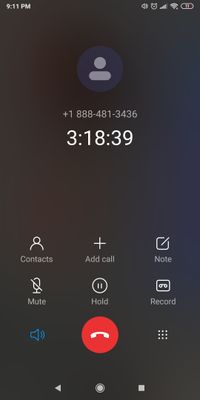 I'm truly sorry to learn about your recent experiences. This isn't the kind of experience we want to offer.

We'd love to take a second look into this and make things right.

We'll send you a PM shortly so we can review this together. Talk to you soon!