I should have listened to the many people saying Shaw Academy was very shady. But I figured that since Fido was offering, maybe it wasn't a total scam.

Fast-forward a month later and I experienced what many have been warning about on the forums/BBB/other areas of feedback.

Just today I noticed a $69.99 charge on my credit card from Shaw Academy. This is not a small fee. Has anyone experienced it recently? Sound off below.

I had the foresight to screenshot my account status in November when I cancelled, and when I checked again today my account was reactivated and charged. That is highly fraudulent, especially since I cannot remove my credit card info nor delete my account, which I wanted to do as a safety measure when I cancelled. You don't encounter these issues with Netflix/Spotify.

Fido, I think you should stop providing this as a Fido Xtra feature. Your offer wasn't really an offer anyway as they do give a month for free, nothing extra was added by you so you basically just were promoting a shady learning platform.

I was lucky enough to get a number from an agent of yours that also had to call to cancel because they got charged, too.

Update: I just called the number and they direct you to billing@shawacademy.com as well. 24-48 hours before I hear about whether or not they will process a refund. I had to specifically request they log a request to remove my credit card information from their records as well.

Fido, I see many feedback posts about this and I think you need to be somewhat accountable for providing/offering it in FidoXtra, as others have said, not to give us the refund but to help escalate the request to whoever was your contact at Shaw Academy so we can get the refund without pulling teeth. This experience is going to make me question some of the like offers you feature in the future.

Thank you for sharing your feedback concerning this.

Jstaceyp
I'm a Participant Level 2
In response to FidoKenny
Options

This is what people are referring to. I had not reactivated my account as they so-called it.

After cancelling they had called me to say I was getting a free toolkit (hence them saying I reactivated with that)- I didn't need it but I humoured them and said okay BUT there was NO mention of my account being reactivated by this supposedly free offer.

I am very disgusted that they are saying this and that the money is not refundable. I have given them screenshots of my non-renewal and cancellation, so this is just giving me anxiety at this point as I await what they say.

If anyone can, on your end, intervene in here that would be helpful now because 69.99 is NOT a small fee and this is higher than my monthly bill with Fido. You have heard of this happening in the Community in 2018 and 2019 and you had done nothing to discontinue offering this provider.

Also, what they did? Upgraded my account to bi-annual. I do not need it. I need the money. I have tried to cancel it again and now it just says "Scheduled to Cancel". This is simply unacceptable. To note, they also did not remove my credit card details from my account as I requested.

I don't know if my next step should be disputing this with my bank or waiting for their response again (they already said no refund), your advice would be helpful since you happily promote this provider as legitimate with no repercussions to you. 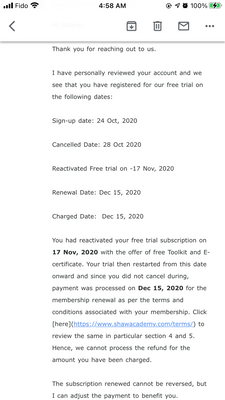 We always want our customers to have positive experiences with our Fido XTRA offers and we're sad to read that this wasn't the case when you used one of the Shaw Academy offers.

We're going to look into this together and and get more info. Sending you a PM!

Jstaceyp
I'm a Participant Level 2
In response to FidoNick
Options

Thanks, Nick! I've not received a PM yet.

I ended up disputing the charge with my bank if only to stop them from charging me in the future. They had supposedly removed my info after I called their support line, including bank details, but it is back there after an agent updated it again after declining my refund request via email and basically (not in verbatim) saying, "know what, we want you to learn, so we'll charge you less! But since you reactivated, we can't issue a refund," which is just so frustrating bc they don't get the word NO.

They AGAIN reactivated my account and I had to cancel it again. It is simply ridiculous it is almost laughable if it wasn't more expensive than what I pay Fido monthly. This is probably the 3rd or 4th time I've had to cancel after they reactivated.

Chalking this as a lesson learned and will be vetting any similar promos you add on Fido Xtra going forward because it is simply not worth the hassle and based on posts/comments I've seen from the community, you've basically let this happen since 2018. You don't listen either. And that hurts me to say because I've lost a little trust in a feature I thought made you guys pretty cool.

There is also legitimately a FB group and people on Twitter who have reported being charged incessantly and having a hard time to cancel/refund or have had to resort to filing disputes with banks so they can have a new card that Shaw Academy doesn't have.

I'm getting a replacement credit card (funnily enough it is also what I use for Fido as it is my main card), the $69.99 will take a max of 45 business days to be credited back to me by my bank (which is fine since Shaw Academy will not give it back anyway) unless Shaw Academy disputes it after which I will again provide evidence of their scammery, I'll need to update my authorized charges again bc of this simple thing I trusted to be legitimate because you promoted it. Fun stuff.

Like I said, I'm not holding Fido accountable for Shaw Academy's business practices or the money I could have lost, but am sharing my experience as calmly as I could. I am also bitter that I had to go through the same things I've read and labeled as "oh they probs just didn't cancel" but maybe you should seriously look into your vetting process if people have complained about this since 2018.

We're going to review things, not to worry! Sorry about the PM, it wasn't sent. I'll reach out to you now!