Missing calls even with a connection to the tower

I switched from Bell to Fido and I've noticed the network is not stable.  I am often missing calls even when my connection to the tower is good ( I literally was looking at my phone and dialed my cell from my home line and home line went to voicemail without even ringing on my cell).  I know it's not a phone issue as it was working fine on Bell and on some occasions I am receiving calls fine on Fido.

Is this the norm on Fido/Rogers network?  Btw I am using a OnePlus 7 PRO .  I am not a tech noob so please don't respond with a check if your sim is seated properly etc as I've done the basics.

At this point I may have to switch back to bell but before I do wanted to see if anyone has any suggestions.

Which version of the phone do you have? If it's the Canadian version, it should have all of the compatible bands/frequencies (see here and here).

The Fido/Rogers networks are generally stable. However, whether your phone is able to receive adequate signal would depend on a number of factors. One thing to note is that coverage depends on your location relative to the cellular towers. You can get an idea of your area cellular towers here. In addition, you should note that not all bands/frequencies are used at all of the cellular towers. It should also be noted that the different bands/frequencies vary in their characteristics with the lower frequencies being able to travel further and better penetrate objects (see graphic here).

I understand that your phone is connected to the cellular tower. However, do you know to which network your phone was connected? Most modern phones will standby in the best data connection. In most cases, that would be a LTE connection. When calls are made or received, the devices need to switch to the 2G or '3G' networks for the calls to connect.

I also understand that voLTE may be an option on your device. However, since Fido does not sell any OnePlus devices, certain features like voLTE and/or Wifi-calling are unlikely to work. So your phone would need to fall-back onto the 2G or '3G' networks for calls. It's possible that, at your location, your phone is able to receive adequate signal for an LTE connection, but the signal for a 2G or '3G' connection might be inadequate. That could explain why your phone shows it's connected but unable to make/receive calls.

I further understand that you didn't have this issue when you were with Bell. It's possible that your location is closer to a Bell tower than a Fido/Rogers one resulting in better 2G or '3G' signal to connect calls.

mau108
I'm a Participant Level 2
In response to Cawtau
Options

I am on the Canadian/North American variant not the T-Mobile or china version.

I am connected to LTE. See details below 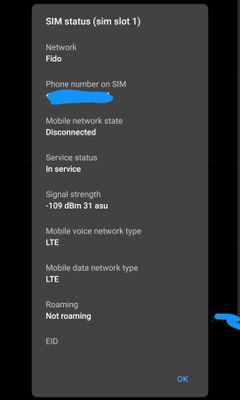 Thank you for the additional information. As mentioned above, that phone should be fully compatible with the networks.

Since your phone is connected to the LTE network, it would need to fall-back to the 2G or '3G' networks for calls.

**edit** Judging by the signal strength shown in your screen capture, it appears as though your signal on LTE isn't that strong (see here). While there are differences in signal strength on '3G' vs LTE, that could suggest that your phone isn't able to get adequate 2G or '3G' signal.**