I am so deeply disturbed and profoundly aghast at your blatant disregard for a customer’s safety and peace of mind. I am referring to a post made by an S.S. yesterday on Fido’s Facebook Page regarding the level of customer service (rather the lack thereof) she received when she called Fido in distress because of a malfunctioning device that would perhaps, if not caught early enough, caused a building fire and further damages that Fido will have to shoulder.

First, asking the customer to go to a Fido Kiosk or a Fido Store is a mistake. You all know that personnel inside the store or manning the kiosk is more than powerless to deal with customer issues as most decisions are made within the head office. If the first person who responded to the call is indeed a manager, then she should be reprimanded and removed from her post. Her superiors must issue an apology to the customer for not only her attitude toward the incident but also the excess trauma this have already caused the customer with regards to poor human relations and the safety and reliability of technology.

You may claim that the issue rests with Samsung as Samsung is the manufacturer of the Galaxy S4. However, may I point out that Fido is the retailer of the mobile device and is the final point of sale of the device. Hence, Fido has to answer.

Whether the device in question is still under warranty or not is irrelevant to this incident. This incident may have well caused a multi-building fire in downtown Vancouver because of an overheating device that melted the charging port. Will you answer to the countless lives and properties lost if such a scenario were to occur because of your negligence of the malfunctioning device?

A melting charging port is not caused by the battery, it is caused by the charging mechanism within the device itself, maybe it be hardware, software or both.

As a service provider, will you continue charging the customer fees for services availed that are not used because of a device that nearly caught fire? Isn’t this an unfair practice?

Fact: the device malfunctioned and nearly caused a fire.

Fact: The cause is not because of customer negligence.

Fact: this has happened before to the Galaxy S4

Fact: Fido is the retailer of said mobile device and mobile services

Since the dawn of Fido, I have been a loyal customer. Our relationship has had many ups and downs. On issues that were not resolved by your highest office in the call centers, I have received apologies and solutions from the offices of the Vice President and the President.

Fido used to be a customer-centric service provider before Rogers Wireless purchased the company. Will you let the new ownership tarnish your image of being a community-caring company? Or are you just concerned about the bottom line? Milk the customer for the most money without any concern for their well-being while using your products and services?

I highly suggest that you forward this message to your highest office and issue an apology to the customer who posted about her distress, then issue her an phone at par with her Galaxy S4 free of charge that will not cause her further trauma with the Samsung brand, and offer her some sort of compensation for all the trouble and trauma she has experienced both with Fido and Samsung.

With this post, I hope you correct yourselves and better train your personnel to be more human, with better listening skills and abilities to resolve issues. If an issue cannot be resolved by Level 1 CSRs, then pass it on to a higher CSR until it is satisfactorily resolved to the agreement of both parties.
You don’t want this to be a court case of Queen v.s. Fido? No? The cost of a lawsuit would outweigh the cost of what you can do for this girl? No?

Please… be human! Please… be a responsible company! 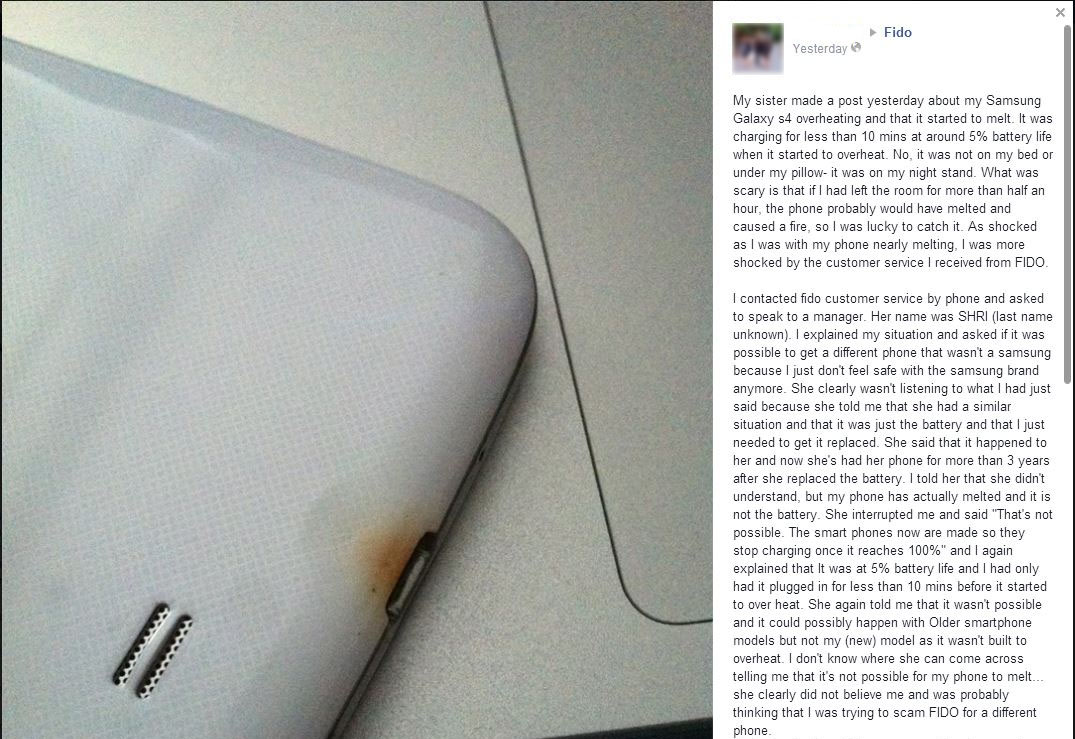 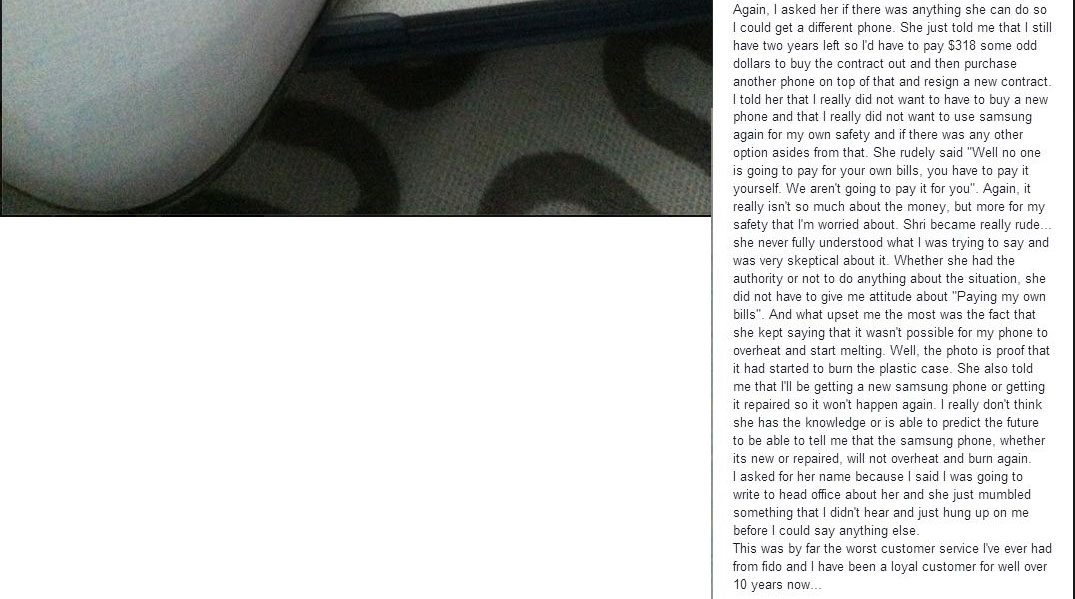 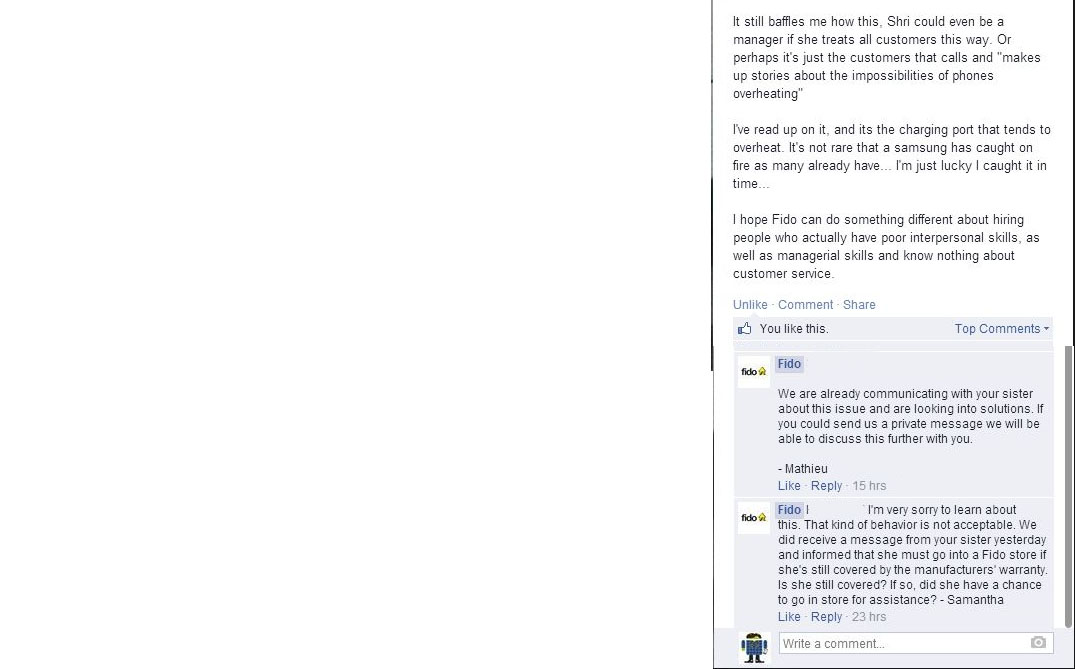 Flag this to a Moderator
Message 1 of 7
2,664 Views
0 Likes
Reply
Highlighted

Very well written and documented.  I do hope Fido has a acceptable solution for your case.  Its a shame us customers has to deal with such behaviour.

Brings back memories of my first time leaving Fido (more than 10 years ago). I was just starting university and my monthly check (yes check) to Fido was a few days late and my service was cut. Its my fault and I called Fido to explain the situation and ask if they can reinstall my service during the few days while my check is being cleared. Fido wasn't able to help me then and I entertain them with the idea if I sign up to a another carrier I would get instant service rather than having to wait (I really need a working cellphone immediatly). The response from the Fido rep is "I'm looking at your credit history and with your score no other company will accept you except for us".  That single quote from the rep decided for me I need a new carrier.

like the OP said, please treat us customers with a little more respect please? This type to rep attitude shouldn't happed in 2014.

Flag this to a Moderator
Message 2 of 7
2,635 Views
1 Like
Reply
Highlighted

Hi childoftheworld. As you can see in the picture you posted, we have reached out to the customer and are still waiting for her to send us a private message with her information so we can tresolve this situation. We have Different solutions for her which can only be discussed with her.

Flag this to a Moderator
Message 3 of 7
2,629 Views
0 Likes
Reply
Highlighted

WuFai... I hope Fido learns a lesson.
Flag this to a Moderator
Message 4 of 7
2,622 Views
0 Likes
Reply
Highlighted

As this case probably has started to gone viral already, your call centre/customer service should already know her number, and her account.

No, she won't have a cellphone to call you back or respond to your call unless she is lucky enough to get a loaner from a relative or a friend.

She has already been traumatized, shouldn't you be the one who should be initiating the Private Message, or call her Dad? or her Sister?

She has reached out to you twice, on a call and her FB post. Her sister posted once. Now, she is afraid.

When I had given all up with my rows with Fido. I never had to initiate a call...or a private message, your office called me directly to offer a peace offering.

Well, in this case, no one is able to call her anyway. But please be the bigger man since this is on your court, PM her instead of waiting for her to PM.

Flag this to a Moderator
Message 5 of 7
2,619 Views
0 Likes
Reply
Highlighted

We understand and appreciate your concern for our customer and we take this situation very seriously.

We can only discuss the issue as well as the solutions with the customer and have already reached out to her and her family to resolve this. We unfortunately cannot discuss this issue further on this forum since it concerns a different customer and their information.

Flag this to a Moderator
Message 6 of 7
2,608 Views
1 Like
Reply
Highlighted

I'm in constant touch with the customer so I know the current proceedings. Thanks for taking care of this.
Flag this to a Moderator
Message 7 of 7
2,587 Views
0 Likes
Reply