Is 3G a minimum or a maximum speed?

A user previously asked a similar question:
Question about Data Plan full details
As they said, footnote 9 states:
"9. This plan includes data at 3G speed with download and upload speeds of up to 3 Mbps. On the Fido network or in an Extended Coverage area."

But it doesn't say whether that is a minimum or maximum.
Cawtau stated that it is only for "basic plans" however, on my interface, there is no basic section and every plan has this footnote. I can't find a plan that doesn't include it.

Speaking with a representative online about this, I was told that it was because it's a "minimum speed" for the network and that all the plans with this footnote can achieve LTE speeds but it's not guaranteed. Is this true? I would like a rep to verify this and I think the footnote itself should be clarified to indicate the minimum and maximum speeds for each plan. If some plans are indeed barred from using the LTE network, it's very unclear.

Had you had a chance to the link to the explanation in the solution to that thread? In a post in that thread, I noted that the Full Details includes references for all of the plan types whether they are applicable or not. The number is used to reference to which specific detail is referenced. It is similar to references in an article or journal. If a particular statement is to be referenced, a number (usually superscript or subscript or otherwise identified) is added to the end of the statement. Those full details only apply to the specific statement from which it was referenced.

As shown in the image here, the statement referencing the 9 footnote is: 3G network speeds for light browsing and for standard definition video quality when streaming9

Contrast that with the All Plans Include for Data, Talk & Text plans: 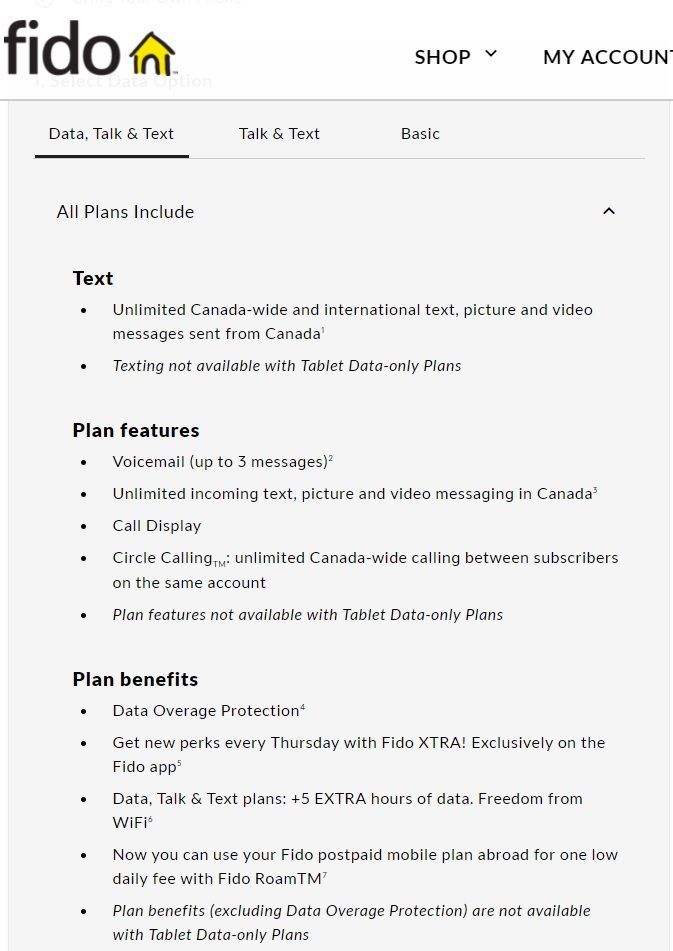 No statement references the number 9 detail.

If you aren't convinced, another example of the using a single Full Details section would be footnote 4 also shown with the Talk & Text and Basic plans. That footnote relates to Data Overage Protection, however, that feature is not available with Basic plans nor is data even included with Talk & Text plans.


...I was told that it was because it's a "minimum speed" for the network and that all the plans with this footnote can achieve LTE speeds but it's not guaranteed. Is this true?...

I would say that explanation is not quite correct. While it is true that connecting to a LTE network (and therefore LTE-speeds) is not guaranteed because there are many factors which can influence cellular reception. Depending on the particular set of circumstances, a device may only connect to the '3G' (UMTS or WCDMA) networks. However, that number 9 detail in the Full Details is not referring to differences in network cellular connectivity. The Basic plans only allow for 3G speeds, even if connected to the LTE network.** 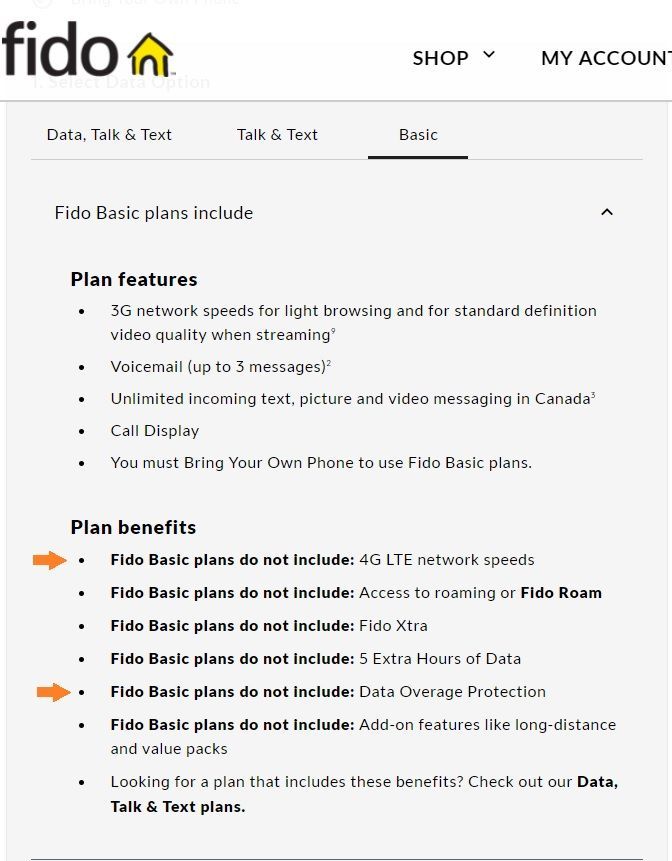 Taken from link above**

Hope this clarifies and helps 😀

Fido4922
I'm a Participant Level 3
In response to Cawtau
Options

Yes I suppose I was confused for two reasons. One was because I didn't realise that I was in the "exclusive for you" section, which did not have the 3 tabs: "Data, Talk & Text", "Talk & Text", "Basic" and people kept referencing these. Secondly because of the shared details box. You're right that "No statement references the number 9 detail." which I guess made it more confusing because I wondered why it was shown as a footnote if no plans used that footnote. Even now that I can see the "basic" section after exiting the "exclusive for you", there is no plan that uses that footnote.

So, I guess these plans all have no speed cap then?

I am doubtful Fido would suggest any of the Basic plans as exclusive for you. Those plans would likely be Data, Talk & Text offers if they include data. If that's the case, they would have access to full LTE speeds. That said, it should be mentioned that speeds can vary depending on various factors. However, those plans would not be strictly limited to 3G speeds.

I'm not sure why the Basic plans you are shown do not reference the number 9 footnote. However, I would not take that and assume they also have access to full LTE speeds. Those plans are considered Basic for a reason. They would have the same limitations listed on the main Fido.ca website (ie when not logged-in).

The answer is stated in the details of the footnote you provided.

"of up to" means maximum so you will get a maximum speed of up to 3 Mbps.

Hope this clears it up for you.

Yes this makes sense. It was just oddly in contrast to what the service rep was telling me in the chat, so I was a tad confused after chatting with someone. I guess we just misunderstood each other.