First time posting on the online community.  Hopefully I am posting in the right channel to get some help on the slow LTE+ speed I am getting and also hear from other community members on their speed.

The device I used to do the test is a Samsung GS7 running Android version 7.0.  The APN is using ltemobile.apn on the Fido network.

I have used the Android OOKLA speed test app (version 3.2.39) and the D/L and U/L speed I am getting is ~5 Mbps/0.2 Mbps, respectively.  The signal bar strength shows full bar at LTE+, but this speed seems more like 3G speed.

Using the same phone, I popped in a Koodo sim and repeated the same test. The D/L and U/L I get with Koodo is ~110 Mbps/14 Mbps, respectively.

My question, is there anything I can do to improve my LTE speed?  Could Fido be throttling the speed?  Definitely would love some insight from other members. 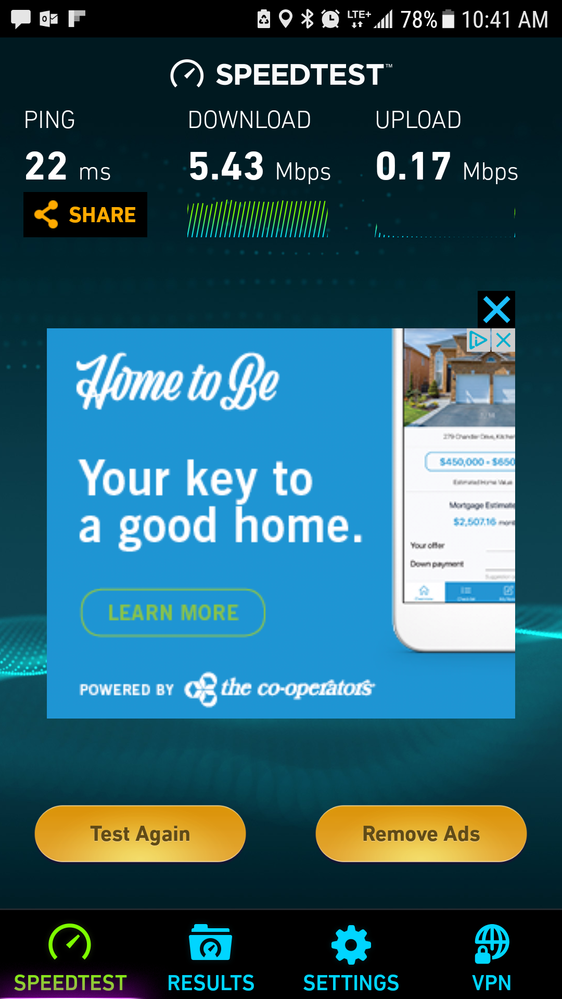 Adding another screenshot with the location of my test.  Toronto near Eaton Centre 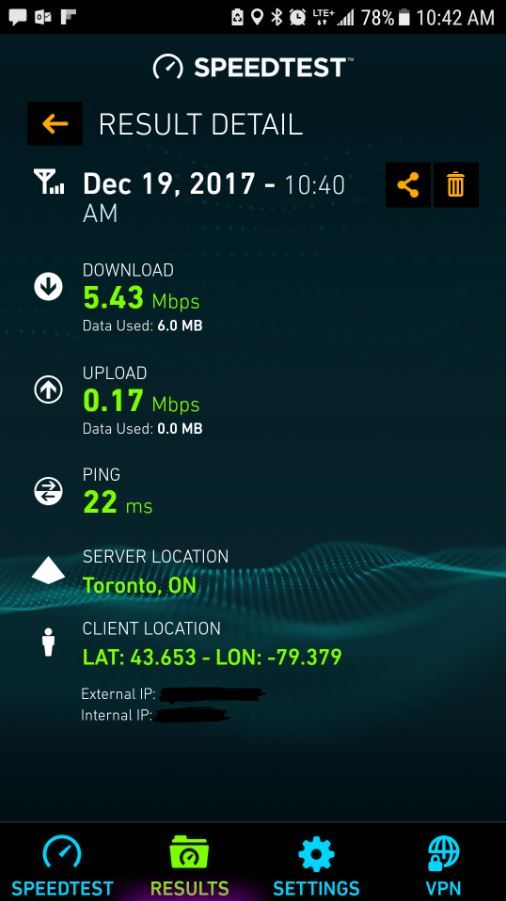 There are many things which can affect LTE speed -- strength of signal, network congestion, LTE band(s) or frequency(-ies) to which your device is connected, etc.

Both Telus and Bell recently re-farmed their entire 2G (CDMA ) network frequencies to LTE allowing for more widespread carrier aggregation. On the other hand, Rogers has only re-farmed a portion of their 2G (GSM) network. Those areas would be capable of 3 band aggregation.

It is likely -- some say inevitable -- that Rogers will eventually decommission the 2G (GSM) network and also redistribute those frequencies. There was speculation that the 2G sunset would occur in 2018, however, there has been no confirmation to that effect (see here).

Cawtau, appreciate your thoughts and input into the slow LTE+ speeds.  Given the 2 band vs 3 band situation, it puts Fido/Roger's LTE+ speeds at a disadvantage over Telus/Bell.  I researched the Fido community a little and it appears a few others dating back few years had experienced similar slow speeds, albeit my speeds seem alot slower.

I would love to learn more from others that have encountered this on what they have tried (or not tried) to improve the speed - to me, this hardly seem like an acceptable situation to be paying for LTE+ but in actual fact only receive speeds on par with 3G.

I'd also appreciate if there are any guidance from Fido to diagnose/troubleshooting/resolve the issue.

Is there a way to open a formal ticket for Fido's Technica/Network team to investigate?

By all means, diagnose and troubleshoot. However, if you've read some of the other threads in the community, you've probably come across some of my other posts on the subject.

As previously noted, there are many factors which can affect LTE speed. The irony of this newest 10Gb promotion is that LTE speeds (or data speeds in general) are probably going to slow even more. More people using larger amounts of data with a limited amount of bandwidth means more sharing of that bandwidth (think 401 or DVP at rush hour). Freedom Mobile made the bold move to increase data because their customer base small -- their whole shtick when they re-branded was traffic-free data. The saving grace for the other providers is that FM's coverage is still rather poor. Only time will tell as to how much data speeds will be affected with this new influx of high data users...

You're right, the current carrier aggregation situation does put Fido/Rogers LTE+ speeds at a disadvantage. I'm sure they are aware of it as well. I think that's why there was all the speculation of shutting down the 2G network by 2018 so they can re-farm the frequencies. However, I think there might still be a rather large industry using 2G GSM pressuring for its delayed sunset. Bell and Telus were able to decommission their 2G networks because no point-to-point communications used CDMA.

AznFri3dRic3 wrote:...to me, this hardly seem like an acceptable situation to be paying for LTE+ but in actual fact only receive speeds on par with 3G....

Just to clarify this popular misconception, you're not paying for LTE (or LTE+). You're paying for an allotment of data, not the network or speed at which that data is sent/received. Data speeds are not guaranteed. Depending on your location and other circumstances, a particular phone may not even connect to LTE. Yet, that phone can still access the data on one of the other networks.

Respectfully, I disagree with your opinion on not paying for LTE and that we as customers are only paying for an allotment of data.

If that was true, the Fido/Rogers would not be using the same as a saving grace against Freedom.  Furthermore, Rogers continuously advertises about their superior LTE service.  These advertisements is used as incentive to attract customers over a brand like Freedom and as a means to justify their higher prices, as a generalization.

The only caveat that Fido/Rogers can use is if the customers device is the limiting factor, which in my particular case is not so.

Essentially, customers choose to pay Fido/Rogers over Freedom is for the "better" service, amongst other factors.  Hence, to not expect to receive the same and become complacent on the provider would appear as a bait and switch on what is advertised vs actual service provided.

It's not bait & switch. Have you seen a recent claim boasting Rogers' superior speeds in their advertisements? Superior LTE network doesn't necessarily mean faster. It used to be Largest LTE network in Canada. They advertise about reaching places the other networks aren't available... On their website, they describe the network as reaching 97% of Canadians -- no mention of speeds. The used to mention peak speeds, but they removed those upto claims a long time ago. Fido's website does state Amazingly fast, but that does not make any claims of actual speed capabilities.

I also understand your speeds are slower than those stated in the reports. Those numbers are nationwide and include speeds from less densely populated areas than downtown Toronto. Everyone in the area has to share the same limited amount of bandwidth.