I also signed a Black Friday promotion plan on Nov 27 2020, with a FREE tablet plan offered to me!

similar to the gentleman of the captured img below

*Activation fee for all 3 lines waived

include one activation fee credit of $45+tax added, remaining balance of $304.86

I called in at that night, the CSR added another activation fee credit  and the $10 credit

for me as promised, but she couldn't adjust the tablet line cause she doesn't have

the authority to do so, and I have to wait for the Office of the President's call 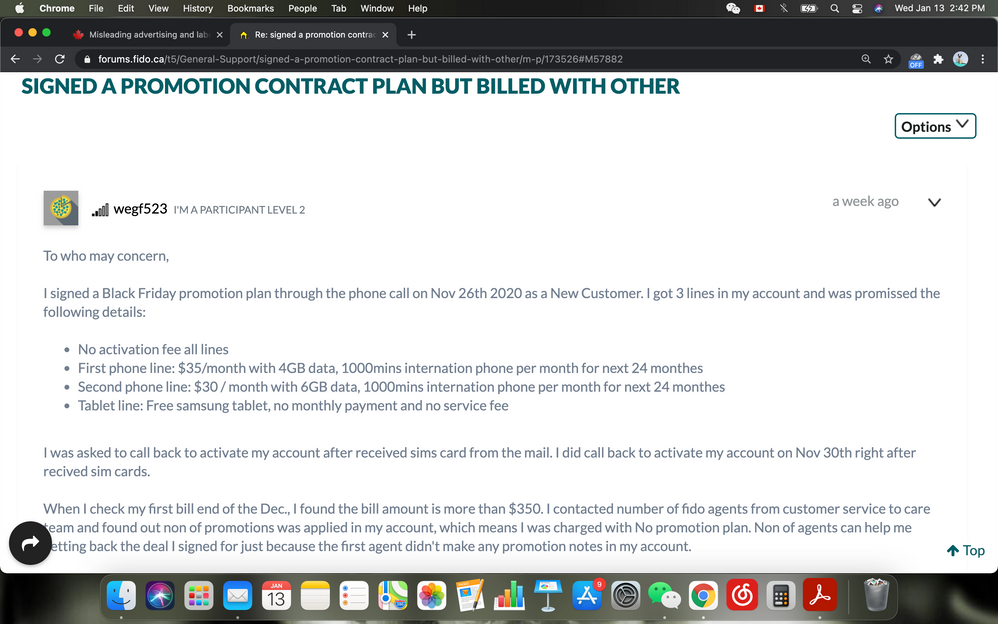 Today as of Jan 13 2021, I received the call from the Office of the President

I told her I were promised by the CSR with a free tablet;  free 4GB data plan; and activation fee free of charge

Her "arguing" points are:

1.We would never need to lose money to get customer to sign up, we would either offer free tablet or free data plan

2.There might be miscommunication, the CSR means the Free tablet is ONLY the tablet itself and not the data plan

3.I could waived the tablet activation fee and offer a $60 credit , that's equivalent to $5/month for 12month

So I told her that I've confirmed 3 times with the CSR I pay nothing for the "tablet" before I sign up for the promotion,

if I would knew I need to pay for the plan and activation fee, I would never take the tablet, and I told her to listen to the voice memo, and I guess she got offended by I cut in while she speaks, she spoke to me" you don't need to tell me what to do" and later the conversation became not pleasant at all!

She then the "arguing" points are:

1.If the CSR promised a Ferrari to you and we don't have Ferrari, we can't give you a Ferrari

2.I will listen to the voice memo and IF the CSR never mention a free plan and activation fee waived,

3.the CSR never noted the plan is free and activation will be waived

4.you received a confirmation e-mail of your plan stated all service, you should be responsible

5.If CSR gave false offer, we can't honor you a free plan but taking back the tablet itself

At that time I am also mad of how her approach, I told her If CSR verbally offer me free plan with tablet, but he didn't

or forgot to note it, I shouldn't take responsibility, I told her to listen to the voice memo , but be fair not only to

pick on words "free tablet", as she said IF CSR never said the free plan and activation fee waived and I have to take the resposiblility, CSR also have the responsibility to tell customer if there will be activation fee and monthly plan charges as well, and I am quite sure that am not at fault in this case because I have confirmed quite a few times,

and I told her if I know there will be charges for the "tablet" I will never take it, and not because I am greedy and asking her to honored me  a free plan, but that's what the CSR has promised, not every asian is greedy!! And then she accused me for accusing her racist

I asked her If I could get someone else to help me, she told me that she's the only one following my case,

"Rogers" give her this position that means Rogers trust how she solves issue and her competence.

she end my call and nothing had been solved, and I've checked the web, not only us two cases with the free plan and tablet offered, there are people around!!!!!

e-mail sent to customer, customer should be fully understand and responsible, and could cancel it by 15 days trial period. My point is, CSR verbally promised our credit, and I will take for/and think the credit will add on the bill itself, and it is true that activation fee and $15 credit was on the bill even though they weren't shown on the confirmation e-mail. And at that time I always check my bill online from Fido account, but it only show  -$50.85 remaining balance, and can't even see full detail of it, until I received my paper bill by Jan 5 2021, thats one and a half month after!!!!

In conclusion, I'd say

1.she didn't want to honor me the $10 tablet plan credit , period! What she meant, she can't give out what the company doesn't have, ( CSR offered a Ferrari, I can't give you a Ferrari), but not able to honor a credit is an excuse!!

3.If CSR verbally offered the plan credit, and he didn't or forgot to note, should customer take responsibility in this case? If it could be done and fix, who should be the one to sacrifice their interest? If it couldn't be done or fix, would it be a false advertising? Can customer protect their rights by law in this case?

4.Her best solution and action will be taken will be taking the tablet back and think nothing ever happened to me

**** I just received a PM from wegf523 who had the same free tablet plan offered to him, he got the call today

and he said the gentleman who had helped him fixed everything said there's system error!!!!!

And it might be true, I done my order at the Nov27, I never receive my tablet and no activation had been done

untill I call in at the Nov 30, the CSR did the tablet order right at that night for me!

Let's look forward for mine! 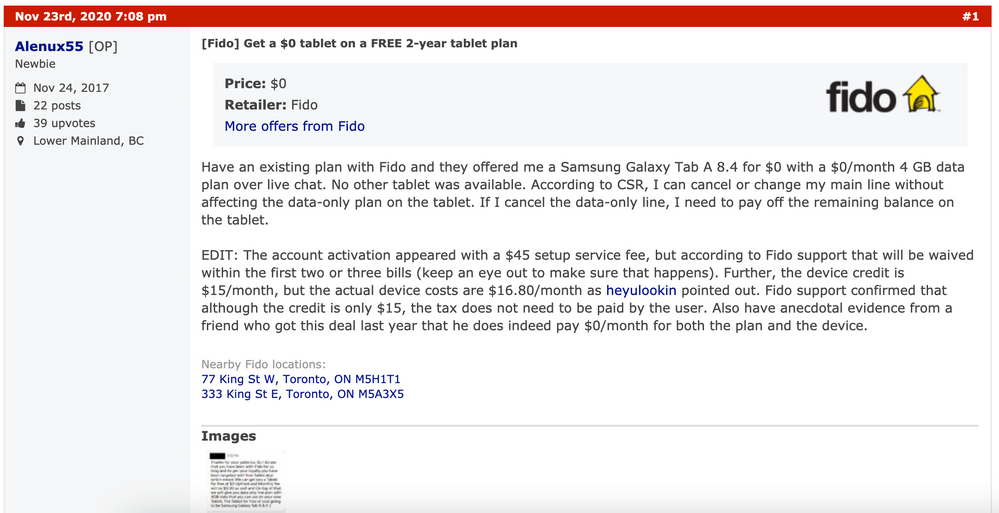 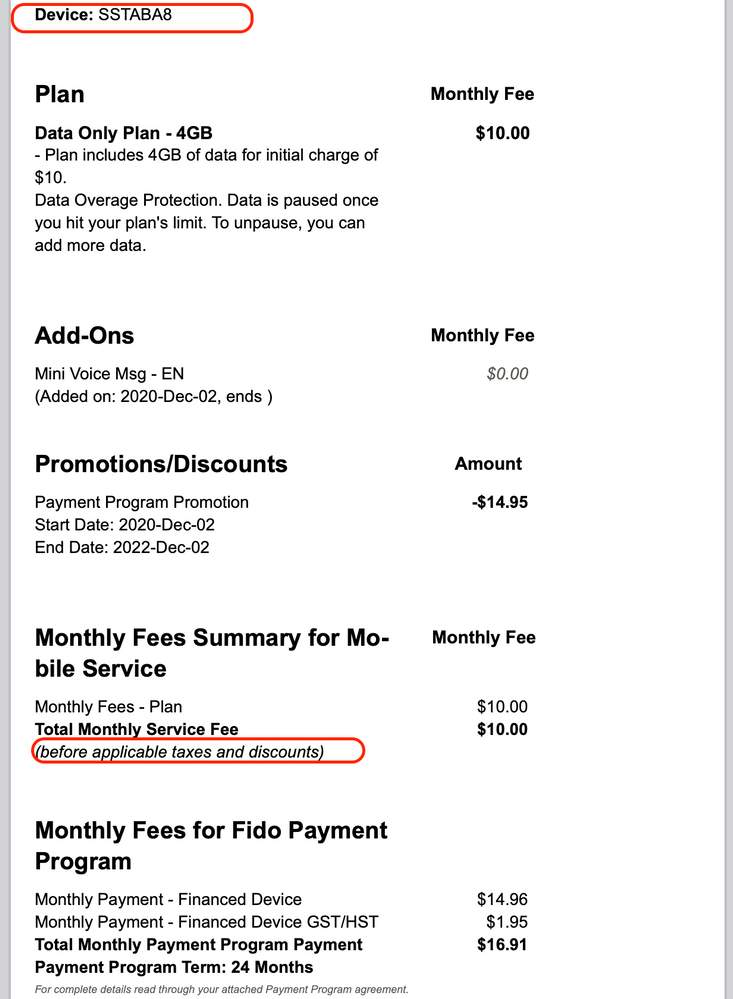 Hey @Diulasaint and welcome to the Community.

I'm sending you a PM to get this looked into.