Fido Roam Charges when Cellular Data and Roaming Data is OFF!

I am another victim of these Fido Roam Charges while I was in Mexico from Jan 10 to Jan 18. I was conscious about turning off my Cellular Data as well as ensuring the Roaming Data is also off on my phone prior to boarding the flight to Mexico.

When I return and saw the Fido bill, I was surprised by these roaming charges. So I start googling and calling up Fido customer support.

From googling, I found out that this is a very common issue for iPhone users where there are still "leakage" of data usage when the phone has Cellular Data turned off.

The data usage was as follows (the 5M data usage on Jan 10 was prior to boarding the flight): 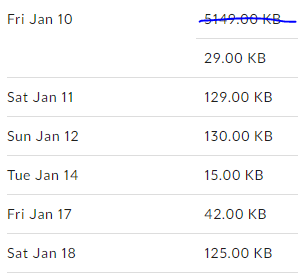 And I was charged with the following:

So I called customer support and tried to dispute these charges but end up unsuccessful.

My argument is as follows:
1. My Cellular Data as well as Roaming Data was switched off.
2. From the small data usage, it prove that I have no intention to use data at all during my trip and these are somehow glitches in the phone or system that I am not aware about.
3. I have not consented that I wish to use Fido Roam or activate Fido Roam
4. I was not informed that I have activated Fido Roam for each of the days I was charged

Below is their argument saying the charges are valid:
1. There was roaming data usage, it doesn't matter how much so I was charged for the full day
2. They have sent a text message explaining the charges and that Fido Roam was available if I were to use
3. I should have switch on airplane mode or pull out my sim card instead of just turning off cellular data and roaming data

The best they could do is to refund one day worth of charges ($12) and offer me extra data and free long distance call in the next cycle.

I just find this to be ridiculous how they can charge a full day for a 15kb usage (Jan 14th). Also by them sending you a text saying Fido Roam is available you automatically opted-in on the service and they can charge you the moment they detect any usage. They don't even tell you Fido Roam is activated for the full day.

After calling them and speaking to multiple reps with the same result, I now decided to switch to a different carrier and I will be filing a complaint to the Business Bureau and CRTC.

Help me understand this: I turn off my Data Roam....Put my phone on airplane mode....do not agree to Roam yet when I use the WiFi ONLY in my rental in Mexico, if a SPAM PHONE CALL comes in to my voicemail I get charged $14?! I have 2 phones on my account and have just gotten a HUGE bill.

Please reach out to our customer care team so an agent can review this with you !

This is absolutely ridiculous!

I am in the exact same situation today and will be disputing the charges as well. I'm also ready to drop this carrier should they refuse to waive the extra $75 in roaming fees they charged me without my consent. Like you, I have turned off my cellular data on the plane to my destination and ensured that it stayed OFF for the whole trip (I would check multiple times a day every day and especially after receiving their notification that I was roaming and it was always off).

From my research online, there have been many customers complaining about this recurring issue in the past but the reps I talked to pretended they were unaware of it all so that they can keep stealing your money and never actually get down to work to fix what really is a TECHNICAL ISSUE on their end that needs to be addressed ASAP. Way to go Fido!

I also find it frankly insulting that they had the nerve to suggest removing the sim card from your phone as a solution: "No Fido, you fix YOUR technical problem and I get to use my phone and FREE WIFI with cellular data/roaming off and I don't get wrongfully charged for roaming after my trip. That's the REAL solution. I'll be getting a call from their head office this week. They better not use the same argument with me. It ain't gonna fly.

Lisa36
I'm a Participant Level 2
In response to Laly1990
Options

The exact same thing has just happened with me but I have TWO accounts....me and my husband so I just hot a HUGE roaming bill for 2 weeks in Mexico with my Data Roam and Data turned off!! WiFi on in our rental but never agreed to Roam

It would also depend on if you're referring to your data roaming or simply your roaming settings.

Even if your data roaming is turned off, once you either receive a phone call or a text while away from Canada, it would trigger the fidoROAM add-on.

Feel free to contact us over these methods if you need help.

Thanks for sharing your experience with us! That's not what we want for you, I assure you. Unexpected bills are never fun, especially when coming back from a trip.

If you don't want to use Fido Roam, you can unenroll by contacting customer service. If you do, you'll be charged pay-per-use for any usage.

If you don't want to incur any charges, you can always remove your SIM card from your phone and store it somewhere safe. While turning off data roaming normally does the trick, removing your sim from your device is a safer bet.

That being said, I'll send you a PM so we can take a look at your account.

hk13456
I'm a Participant Level 2
In response to FidoRanya
Options

Thanks for sharing your experience with us, that's not what we want for you I assure you.. Unexpected bills are never fun, specially when coming back from a trip!

Then why do Fido charge a full day when only 15kb of data was used?  And then refuse to reverse the charges after understanding they were unexpected?

If you don't want to use Fido Roam, you can unenroll by contacting customer service, in that case you'll be charged pay per use if there's any usage.

If you don't want to incur any charges, you can always remove your SIM card from your phone and store it somewhere safe. While turning off data roaming normally does the trick, removing your sim from your device is a safer bet.

I thank you for the advice.  If I were to know this earlier, this would not have happened.  So, how about reversing those charges on my bill and I will take your advice to prevent this from happening in the future.  I don't think it is fair to expect customers to know this ahead of time.