I still have the message. 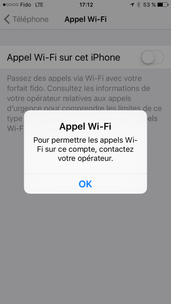 You can refer to this page for updates as we'll be updating it as soon as we get any news on it!

I was having the same problem, so I decided to use the good ol' scientific method to find the solution. I have a fido unlocked 6 plus. Wifi calling worked since day one. I added a line to my account for my wife. Two days later, Fido sent an already activated sim card by mail. I inserted the sim card into a unlocked Fido iphone 6 that I bought from someone on kijiji. Everything worked,  except for wifi-calling. Got the "to enable wifi calling on this account, contact Fido". So I called them, and after spending the whole day on the phone with several CSR, going throught countless network resets, removing and adding the option, bah, complete waste of time. Another hypothesis which could not be supported. Eventually, I decided to put my sim card out of my iphone 6 plus who's wifi calling had always worked into my spouse's iphone 6, and surprise: Wifi calling worked on my spouse iphone 6. Moreover, when I put her sim card in my phone, I got the same contact fido message. Therefore, I was able to conclude that there was nothing wrong with the phone itself, but the sim card may be the culprit. So, this morning I went to a fido store, they activated a new sim card and voila, it worked. That was it! All it took was another SIM CARD.

Can someone help me to enable wifi calling on iPhone 6 Plus. It stuck at the "we are unable to process your request" error. It's on ios9.3.5. Carrier setting 24.2

You seem to have done everything right! You must upgrade to the iOS 9 and update the carrier settings before completing the setup process. You can also text the word WIFI to 4900 and check out more info on our community!

It's a iPhone 6s purchased from Fido and on the Fido network on a monthly plan.

Thanks for the information!


I'll send you a PM in a few minutes.

paragliding
I'm a Participant Level 3
In response to FidoManuel

I've switched to Fido from Rogers (ported my phone number) and brought my own iphone 6 (bought directly from Apple). Everything seems to be ok except I can't activate wi-fi calling.

I go to Settings->Phone->Wi-Fi Calling. I move the slider, get a warning message ("Enable Wi-Fi Calling?"), press "enable", and then I get a message saying "To allow Wi-Fi calling on this account, contact your carrier". This message actually pops up twice: very briefly for the first time, dissapears momentarily, and reappears again until I press "ok".

I've tried calling Fido answers. The representative has informed me that nothing on my account was preventing me from having access to the feature. He has also attempted to do a "network reset" (or something like that) for me on the carrier side (wait for call to disconnect, power off, remove SIM etc...). Unfortunately, this hasn't resolved the problem. Another thing I've tried is a full reset and recovery of the phone. No luck with this either.

Could the issue have anything to do with Fido not having information about the device I am using? I.e. no devices are listed when I go to my account on the web. When I was with Rogers, the phone somehow registered on the carrier's website despite being factory unlocked.

I would really appreciate any suggestions how to enable wi-fi calling. I am out of ideas at this point.

(2) Wi-Fi calling used to work with Rogers on this very phone.

(3) The phone number was ported today.

VirgilBoy
I'm a Participant Level 3
In response to paragliding

I am in exactly the same boat as you. iPhone from Apple, ported over to Fido. No Wi-Fi calling so far. Last tech said they are having issues and that they are using a "newer" version of Wi-Fi calling.

If they fall back to non-Fido iPhones won't work with their Wi-Fi calling, then I may be shopping for another carrier.

Wi-Fi calling with both Rogers and T-Mobile activated just fine.

Makes me sorry that I left Rogers. Fido tech service so far is not as good as Rogers.

This still appears to be an issue on certain iPhones (as of Sept 29th). Particularly if not originally a Fido locked phone, and maybe even if Apple store warranty replacement. Problem is apparent on iOS 10 on iPhone 6.

I'm assuming this is because the phone's IMEI isn't registered into a list somewhere on Fido's end.

I have 2 co-workers with Fido. One has an original Fido iPhone 6, the other has an unlocked Apple store iPhone 6. Both of them can use Fido Wifi calling no problem, and I believe they activated it earlier in the year.

Yesterday, my iPhone 6 wouldn't enable Wifi-calling (got the "Waiting for Wi-fi calling activation..." message after I entered my emergency contact address). Even after waiting about 24 hours, it didn't "activate" the wi-fi calling.

Workaround that appears to work: Take your Fido activated SIM, stick it into another iPhone that was original for Fido (originally Fido locked), and then enable Wi-fi calling on that phone.

That's the magic. I believe that trick will properly register/provision/activate Wifi calling onto your Fido account (because I assume the IMEI of that other phone is in their internal database). Then take your SIM out and place it back into your phone (the one that won't activate), and turn Wifi calling on again, and it should start working right away.

I think the whole "technical" problem is soley the initial activation of Wifi calling onto your account. I think the provisioning will work on any iPhone (I got the email from Fido welcoming me to Wifi Calling, but Wifi callind was stuck with the "waiting to activate" message).

Other than this actication issue, it makes no sense that there would be any other technical reason for Wifi calling not to work. All iPhones are made by Apple, and the only difference is the locked status of a phone.

paragliding
I'm a Participant Level 3
In response to paragliding

I forgot to mention that I had also tried resetting network settings on my phone (Settings>General>Reset>Reset Network Settings). And I've also tried to activate wi-fi calling over LTE. Neither worked.

We can't guarantee the Iphone will work if it was wasn't purchased originally from the original carrier ( in this case Fido ). We are still looking into this however and will update everyone once we get more news.

PLeon
I'm a Participant Level 2
In response to FidoTerry

It finally worked for me. The IOS update 9.3 triggered a new carrier settings update, applied. Then tried 3 times and it works! Now I can see FIDO-WIFI and I own an unlocked phone!!! (I did not buy it from Rogers/Fido)

knownone
I'm a Participant Level 2
I'm having the same issue as a lot of other people here. It does some provisioning but the returns to the setting screen and wifi calling is off. If I try to re-enable it says "We are unable to process your request at this time" and I cannot enable wifi calling. Anyone able to help or give me some advice?
0 Likes
Reply

Thanks for reaching out

Is your phone a Fido/Rogers phone? We can't guarantee it'll work if it's not the case!

TannerR
I'm a Contributor Level 1
Is there an ETA on when wifi calling will be working on unlocked phones and work on any type of plan (like every other carrier)?
0 Likes
Reply

An interesting note: despite having an iPhone 6+ purchased in the 'States and never having been able to activate wifi calling, I wondered what would happen if I popped my SIM into a Fido-purchased iPhone 6s and activated wifi calling that way.

I was able to activate wifi calling without any issue on the Fido iPhone. I then put my SIM card back into *my* 6+ and was able to switch wifi calling on. Within a couple minutes my iPhone showed WiFi Fido while in my apartment (where I get no signal typically) and I was able to make several test calls. After about 30 minutes, however, it reverted back to "No Service" and I have yet to see WiFi Fido reappear... WiFi calling is still enabled in my settings though.

misfiringsystem
I'm a Participant Level 3
^When I tested on my cousin's iPhone 6s (bought from Apple Store) and it worked (he's with Fido as well), it really raises the question whether there is actually any technical aspect linked to that requirement.

I do have a theory (which I will test tomorrow) that may solve why mine doesn't work. I actually have 2 lines on my account, and I have data block on the other line (my mom's number). I'm wondering if the data block from the second line is actually interfering with me activating my wifi-calling. I'll call in tomorrow and see if removing the data block solves the problem.
0 Likes
Reply

haydenataylor
I'm a Participant Level 3
Yes, it's a new Fido 6s. I have it enabled, just I used to be able to enable it when I had airplane mode on and wifi on. But now it just hasn't come on.
0 Likes
Reply

Thanks @haydenataylor! Is it working?