Just wondering when will fido get the new update (Android 6.0.1 Marshmallow) for Samsung S6 Edge?

MVP
In response to 10cc

@10cc I never heard of a phone being bricked after flashing a stock firmware.

@10cc As long as you make sure it's the correct stock firmware you'll have no issues whatsoever.

Last night I downloaded Bell's firmware and Odin and will do it this evening.
0 Likes
Reply

Proac
I'm Qualified Level 1
In response to 10cc
Good for you.. That's sticking it to the man lol
0 Likes
Reply

10cc
I'm Helpful Level 1
In response to Proac
Well it is a shame I have to resort to this to have current and Secure phone.

There will be consequences, and news is this WiFi calling will still deduct time from your minutes.

Proac
I'm Qualified Level 1
In response to 10cc
Oh heck ya Fido can't allow users to bypass using cell minutes using VoLTE. That isn't the way corporations with an oligopoly function. With no threat of real competition the big three providers can run roughshod over consumers with little fear of reprisal. Thus we get to enjoy almost the highest cellphone rates in the world while our neighbours to the south enjoy some of the best rates. It's frankly pitiful that third world countries can provide better and cheaper cellphone service to their customers.
1 Like
Reply

10cc
I'm Helpful Level 1
In response to Proac
Very true all of it, well I am now running marshmallow with a June security patch. I know July's patch is out but June is sure better than Fido's November version.

Love control over permissions and the doze feature but most of all the security.

Pathetic I had to resort to that here late into July.
0 Likes
Reply

no update yet. I'm waiting till July 1..no update..no more fido for me

tcartr
I'm a Contributor Level 2
In response to Tonyt2

My 12 year old nephew with an S5 Neo an entry level phone just got his notification to download his marshmallow. I mean, I have had it.

DenisG
I'm a Participant Level 2
It's not going to happen, go get a iPhone. ...
0 Likes
Reply

Get an iPhone? I would rather get two tin cans with a string.

It is obvious Rogers/Fido is not able to support the Samsung Galaxy S6, remember the debacle that was the upgrade to 5.1.1; it caused all kinds of problems that Fido kept denying existed till the very end.

The lack of an explanation proves they don’t care; all you get is the standard cut and paste reply of check the OS Upgrade schedule.

I am sure all carriers in the world have made this update, mu beef is the security updates that still sit at November.

Next phone is the next nexus and it will not be activated on any Rogers property.

Hey @tcartr and thank you for using the  Community.

We would hate to see you go.

I would like to see your options with you. I'm sending you a PM to get this looked into.

Talk to you soon

Might as well stick a fork in my eyes... I had an iPhone before; can't think of any reason why I'd want one now. If I couldn't get an Android, I'd probably go for a dumb flip-phone. Or no phone at all.

Come on people, I realize Fido has a problem here, but Samsungs are the worst phones with regards to updates.

If updates are important to you, get a Nexus. My Nexus 5 (released 2.5 years ago) has been running Marshmallow since October or November (can't remember exactly when), and it's currently running the June security patches.

This is ridiculous. Its been over 1 month since 6.0.1 has been available to Bell, Telus, Wind, Koodo, and Virgin subscribers. This is definitely the last time I'm buying an Android device from Rogers/Fido. Same thing happened when 5.1.1 came out for this phone, and even then, it had the now infamous straight to voicemail bug while on LTE. Absolutely ridiculous for such a big company.

We’re working with Samsung and will be releasing Marshmallow on Android devices with additional functionality soon. The Samsung Galaxy S6 Edge and other devices will get the update in the coming weeks. Please make sure you retain the original software on your Fido Samsung device so you can enjoy all our updates.

Thanks for your patience!

MVP
In response to FidoStephen

We’re working with Samsung and will be releasing Marshmallow on Android devices with additional functionality soon. The Samsung Galaxy S6 Edge and other devices will get the update in the coming weeks. Please make sure you retain the original software on your Fido Samsung device so you can enjoy all our updates.

Thanks for your patience!

@FidoStephen May 25th the update was suppose to be pushed out in the coming weeks, its now August 11th and all we get is an apology and "shoudn't be longer" promise.

What upsets me the most is when Fido increased the cost of the WHP the reason behind it was and I quote.

"We understand how important it is to have a reliable service. And there's a cost that comes with giving the top quality service, and the prices to do so have gone up."

So its kind of hard to defend Fido when you take our money and not provide what is expected. 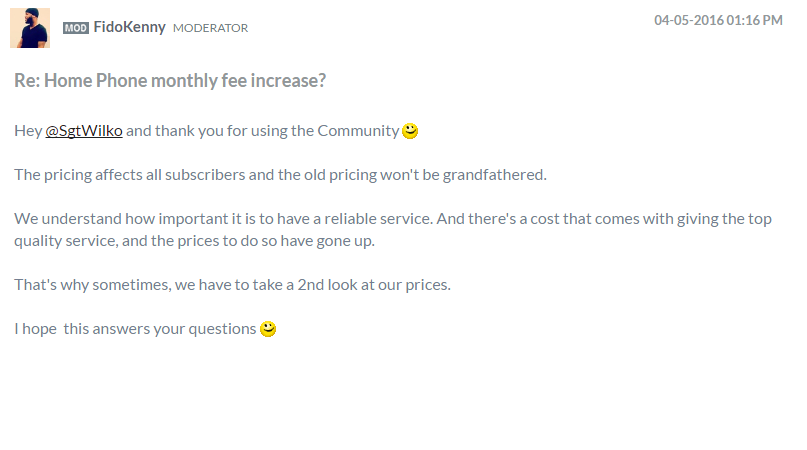 10cc
I'm Helpful Level 1
In response to KAPABLE-K
Well it seems a script was sent to be posted because the same post made by FidoStephen has been posted by a Rogers mod over in their similar S6 thread.

CodingWithoutBu
I'm a Participant Level 2
In response to 10cc

Well, I've written a couple times here over the months. I don't quite know if Fido really is checking these, or just hiring people to keep us calm while they wait another year to give us updates.

I have a new idea. I've already started the process. I've gone to Samsung Canada and started a complaint process in regards to Fido/Rogers and the fact that they're just goofing off when it comes to actually creating the updates (seriously guys, not brain surgery as Samsung already did all the firmware settings, all your tech dept needs is to update your carrier specific settings... also we don't care about wifi calling. The vulnerabilies and battery life fixes are enough to make the change worth it. disable the wifi calling and just get 6 out already... then figure out your issues).

Anyhow, I'm in communication with Samsung and letting them know there's a big community of people with Rogers and Fido who are extremely upset not just with their provider, but as a result of being stuck with the old OS, regardless of who's fault it is, we are getting a very bad mobile experience and many of us are likely not to purchase a Samsung next round as a result. I've asked they consider an alternate way of allowing us people who are stuck with a bunk carrier (like myself as I'm stuck in a 3 year plan) who still need the updates to have the most efficient experience.

I'm hoping with enough people writing, Samsung approachs Fido/Rogers and figures out what the hell is going on, and hopefully has some ability to give them hell for creating such terrible end user experiences.

Fido/Rogers. Shame on you guys. If you don't have the needed resources to dedicate to phone/os updates, and we're locked in to something specific as a result of you guys wanting to tinker and add your own carrier "bloadware", then obviously when you stop supporting us as is apparent with our Samsung S6s (people, we're not getting an update here... we're being strung along long enough to be frustrated into purchasing a new phone or until we forget about it somehow).

As a community we need to start letting the actual mobile company know that locking people into the carrier isn't appropriate if they also desire to give the end users a great phone experience.

hapa99
I'm a Contributor Level 1
In response to CodingWithoutBu

great idea -can you give us an idea what the best way to get in touch with Samsung Canada is (FB, twitter, webiste?).  I want to make sure my voice is heard in regards to tihs debacl.e

A thousand thumbs up. I have sent Samsung feedback via the website.

Also while some might be excited over WiFi calling I am not one. I will simply disable it.

The reason they are struggling with wifi calling is due to the fact they need it to be integrated so its usage counts towards your regular minutes.

Ding ding ding...we've got a winner! The issue is Rogers/Fido needs to make sure we don't get wifi calling without it counting against our mobile minutes. It's all about making sure we don't, God forbid, get a break on the cellphone bills. Frankly they should be ashamed making us wait this long but when there's no competition Fido knows were held captive. The CRTC doesn't seem to give a rats either as I've contacted them with little success.