Just wondering when will fido get the new update (Android 6.0.1 Marshmallow) for Samsung S6 Edge?

FidoKenny
Moderator
In response to Kaho

Hey @Kaho and thank you for using the Community.

Our last intention is to make you mad. But we can only tell you the information that we have on our end.

As soon as there's an update, you will see it in our  OS Update Schedule.

Your understanding and patience are really appreciated.

Why is this topic marked as solved?

So far there is no update, no time frame, and nothing avilable on your OS schedule other then coming soon.

Please explain to Fido customers, how and why you are stating this is the extent of the information you have on your end? Does Fido not work closely with Samsung to bake in your **bleep** Fido application into the s6 image. I find it very hard to believe your support team has no access to the team responsible for deploying the OS updates, to get any sort of timeline or status on what the hold up is. I believe customers would appreciate an honest update at least stating the reason why this is so delayed, with some sort of projected timeline from the team responsible for this update.

Anything would be better then the **bleep** you guys are posting here and marking threads as resolved when they are not. We are not just talking about the feature updates and the new OS itself, but more importantly the security patches included, Fido is behind on, leaving customers phones vulnerable.

xmotionx
I'm a Participant Level 2
In response to FidoManuel
What he's trying to say is, keep checking a link that hasn't been updated since it was created and just hope for the best.
1 Like
Reply

d33
I'm a Participant Level 3
In response to xmotionx

June was suppose to be the timeline for the Marshmallow update but now its changed to "COMING SOON".

I feel like I'll be ready to upgrade my phone before this update gets released. Funny how Bell/Telus already have this update out.

Mynailsdid
I'm a Participant Level 1
In response to d33

So disappointed. I switched to Fido 13 months ago when I got my s6. Defintely not staying when I upgrade my handset - which I'm considering leaving early to get an upgraded handset that runs marshmallow . "Coming soon"? I'll believe it when I see it.

Agreed this is nuts. I feel bad for the fido reps who have to moderate this forum cuz it's obviously not their fault. The high priced suits at Rogers/Fido need to step out from their ivory towers and EXPLAIN why this is taking an inordinate amount of time and irritating their current customers. I know I'll never renew an Android device with Fido again after this debacle. If Fido had a reasonable explanation for the delay I'm assuming they'd make it known. It's funny they never forget to bill me every month but they seem to have forgotten all the people still awaiting the long awaited upgrade they deserve.

tcartr
I'm a Contributor Level 2
In response to Proac
@Proac

Nothing will be said but check the OS schedule. I want to give up on commenting but I am so livid over this debacle I can't help it.

We pay each month and we are not getting full support.

Every other provider has an up-to-date security patch on the S6 we have November.

I called in and was told by a manager the security update is not that important because Rogers has such a secure network. Yes a manager fed me that load.

I want out Fido let me out this contract and waive the buyout.

Regardless I will never renew and next week my BYOD other line is gone to a new provider. Enough is enough Rogers.
1 Like
Reply

Phat24
I'm a Contributor Level 1
In response to xmotionx

This is been waiting forever for the marshmellow update and they can't even give a date been with fido for over 10 years and this make me want to switch and now their getting rid of fido dollars now no real reason to stay with them.

MVP
In response to Phat24

@Phat24 which phone do you have?

xmotionx
I'm a Participant Level 2
In response to Phat24
You can install Bell's S6 edge update using Odin. Instructions can be found on XDA. Downside is losing OTA updates but you can always update to Fido's official update when and if they ever release it.
0 Likes
Reply

d33
I'm a Participant Level 3
In response to xmotionx

Still waiting for S6 to update to Marshmallow.

I feel like I'll end up getting a new phone before my S6 has the fido update.

Thanks for being so slow Fido. Also whats the point of having an update page with dates if you never update the dates on it. So pointless.


Just wondering when will fido get the new update (Android 6.0.1 Marshmallow) for Samsung S6 Edge?

Welcome to the forums!

According to this Official Android Update site, Marshmallow 6.0.1 for that phone is still in developement. 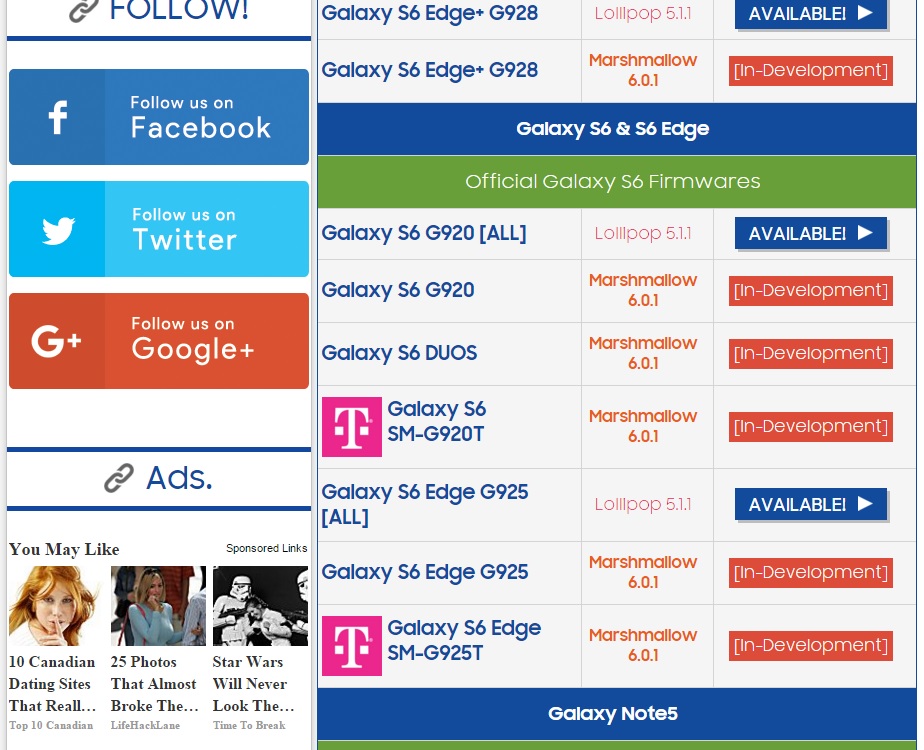 They estimate the first quarter of 2016 for arrival. Please note that once Samsung has completed its development, it will then get sent to the mobile companies. Each mobile company would then implement it with their networks before releasing the update.

CTM66
I'm a Participant Level 3
In response to Cawtau
Looks like there was a date of June 24 on the OS schedule updated previously, now it's back to coming soon. Also, looks like every other major carrier has it, except Fido/Rogers, at least according to youmobile. As we're now in the third quarter, there must be a reason for the extended wait?
0 Likes
Reply

10cc
I'm Helpful Level 1
In response to CTM66
It seems there are two options for users of the S6 line on the Rogers network to get this device updated.
Flash another providers release or break the contract and unlock the phone and sign with another provider.

I am tired of the vacuous replies on this matter, this shows a total disregarded for after sale support.

I am hoping someone buys this phone so I can pay it off get a Nexus and be done with it.

Proac
I'm Qualified Level 1
In response to 10cc
Honestly I wish we could file a class action lawsuit so all us S6/S6 edge owners could give back the devices and move to a device Fido actually supports in a timely fashion. I'm so tempted to go to best buy and get myself the Nexus 6P and guarantee proper support without Fido bloatware. It's bad enough we have to deal with said bloatware but we wait months for security updates. It's **bleep** near comical. Fido really must not care about their long term customers. I can walk into any carrier and walk away with an Android phone running Marshmallow. My one phone line expires in 3 months but I doubt I wait that long to leave.

10cc
I'm Helpful Level 1
In response to Proac
I am looking for a way out of this contract, too much left on buyout, what a joke I want to get rid of this phone and this provider ASAP. Only Nexus going forward.
0 Likes
Reply

We'll definitely keep everyone posted through the Update Link on the community, as soon as we get more news!

We'd hate to see you go because of this =(

10cc
I'm Helpful Level 1
In response to FidoCatherine
I hope so I am one of those who like timely updates. Regardless I know I will no get a Samsung again all Nexus going forward if I stay on Fido, lost all trust for timely updates from Rogers.
0 Likes
Reply

Montreal-user
I'm a Contributor Level 1
In response to Cawtau
It's now July 7th. Still no upgrade!!
Coming soon is not a response to give to your customers. Especially when prior to this response your it was June. So, when is Fido going to actually let their customers know what EXACTLY is going on?
2 Likes
Reply

10cc
I'm Helpful Level 1
In response to Montreal-user
They will not say a word, when they are finished messing about it will simply show up. There will be no explanation or apology. That is just how they choose to do business. So I choose to go elsewhere after this contract.
0 Likes
Reply