Here's a fun one.

The camera flash went on my wife's Blackberry Curve 9360, which is still under warranty.  The video camera lighting seems to work, but when it goes to do a flash when taking a photo, there's just a spark.  Probably a blown capacitor, as there appears to be some electrolyte inside the flash lens.  Anyone who's ever had an electrolytic capacitor pop knows what I'm talking about.  The phone's never been wet or dropped, and has always been inside a tough case.

I take it to the Fido store in Burlington Mall, and the guy sends it out.  No word after two weeks, so I call them up.  They got a message back from the repair place, saying that the phone shows signs of physical damage.  This is a complete lie, as it's always been inside the case.  I doubt the repair guy spent more than a minute with the phone.  And something like a drop wouldn't pop a capacitor.  I have a 9360 that was on a highway onramp for 5 minutes, run over by multiple cars, and only the screen was broken.  It synced up with bluetooth as soon as we got it in the car.

Now here's the real problem.  I'm not paying the $150 to have it repaired, since I can just swap the light with the one from the above mentioned highway phone, but the repair place is still trying to charge $40 for their "diagnosis".  I never signed anything with a clause saying that I would be charged $40 in the event that they didn't do any repairs.  So my phone is being held hostage.

There are no repair fees within the warranty period if the phone is defective except if: the phone is no longer covered by the manufacturer’s warranty or if the phone shows signs of damage (physical, moisture, etc.).

If your phone is not covered by warranty - past 365 days OR with warranty-voiding damage - a quote is created and you decide whether to proceed with the repair. A $40 fee is not applicable if you did not agree to have it fixed for an additional cost.

This situation does not seem appropriate, what has the manager said to you?

Synonymous
I'm a Contributor Level 1
In response to FidoAmandaH
Options

From talking to a girl at the store yesterday, it sounds like it was damaged in transit from the store to the repair place.  The paperwork I have from the store shows that they received it in "good as new" condition, but the repair place says they received it showing damage.  Since it was damaged while in the posession of the store/courier/repair place, they should be accountable for either replacing it with a new phone or repairing it back to "good as new" condition.  They are to assume all cost and risk, once I gave it to the store.

Making some sort of progress on this...

I finally got through to the manager.  It seems that no one gave him the message to call me.

He read over the notes from the repair place.  Apparently, it doesn't say that it was physical damage, but a physical issue (a.k.a. a hardware problem), and the affected part should be replaced under warranty.  Now here's where the snafu is.  I bought the phone from a Fido kiosk in June 2013, but for some reason, the system says the warranty expired in April 2013.  So the repair place is considering it an out of warranty repair.

He said that he was going to call someone at Rogers to get it sorted out, but won't hear back until Monday or Tuesday...

No word from him yesterday.  I call today, and he's off until Saturday.

How can I get this escalated?  It's been three weeks without any progress.  Does anyone know if the Burlington Mall location is a dealer or an actual Rogers-owned store?

Went in to the store today.  The manager has changed his story.  Now he's saying that it's physical damage again.  I demanded the phone back, and I was adamant that I am not paying the $40 that they are trying to charge for looking at the phone.  He seemed to shrug that off.

This is absolutely ridiculous.  We're coming up on 4 weeks without the phone.  From past experiece, I should have just assumed that the warranty was useless, and fixed it myself in 5 minutes.

Lesson to anyone reading this:  If there's something wrong with your phone, NEVER expect it to be covered under the warranty.  They will always say that you dropped it or got it wet.

Paolo
I'm an Expert Level 2
In response to Synonymous
Options

back in the day technicians were once employed directly by fido, who would not make you wait 4 weeks, would service your phone on the spot, and would even open the device right infront of you and show you actual evidence of liquid or physical damage, my how times have changed, this is considered a blow to the customer how can they believe something with out even seeing it.
0 Likes
Reply
Go to solution

Synonymous
I'm a Contributor Level 1
In response to Paolo
Options

The "evidence" the repair place sent over was a picture of the phone with an arrow pointing towards the flash.  They clearly did not open it up, or even provide an explanation of why they think it was physical damage.

This entire experience is apalling, from the hidden charges, to the lack of communication, incompetant repair shop and poor management, not to mention the unacceptable timelines.

I have access to a Bell employee discount.  I think I'm going to be moving all of our phones there.

After 35 days, my phone finally came back.  I thought the fiasco was over.

They couldn't power it up in the store, because I didn't have the battery handy.  I got it home, put the battery in and powered it up.  To my dismay, they wiped all the data and apps from the phone. In what bizarre parallel dimension is a wipe required when sending a phone out to get an LED replaced???

Considering they likely just looked at it for a minute and judged it as physical damage, why would they even continue to wipe it???  At that point, they should have reported the "damage", stopped all work, and waited for authorization before doing any work.  While I understand that the data should be backed up ahead of time, doing a wipe was still unnecessary, unauthorized work.

Now I have to waste more time restoring everything.

Since I had to take matters into my own hands, I replaced the flash with the one that survived the highway onramp, and it's good as new.

Here are some pictures of the old flash and it's socket. 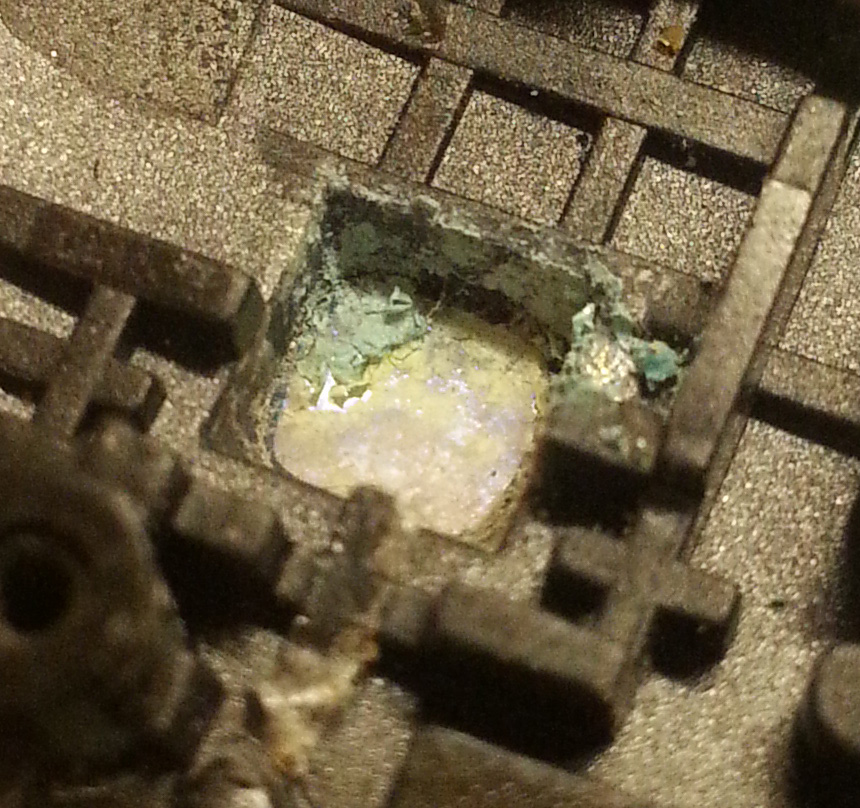 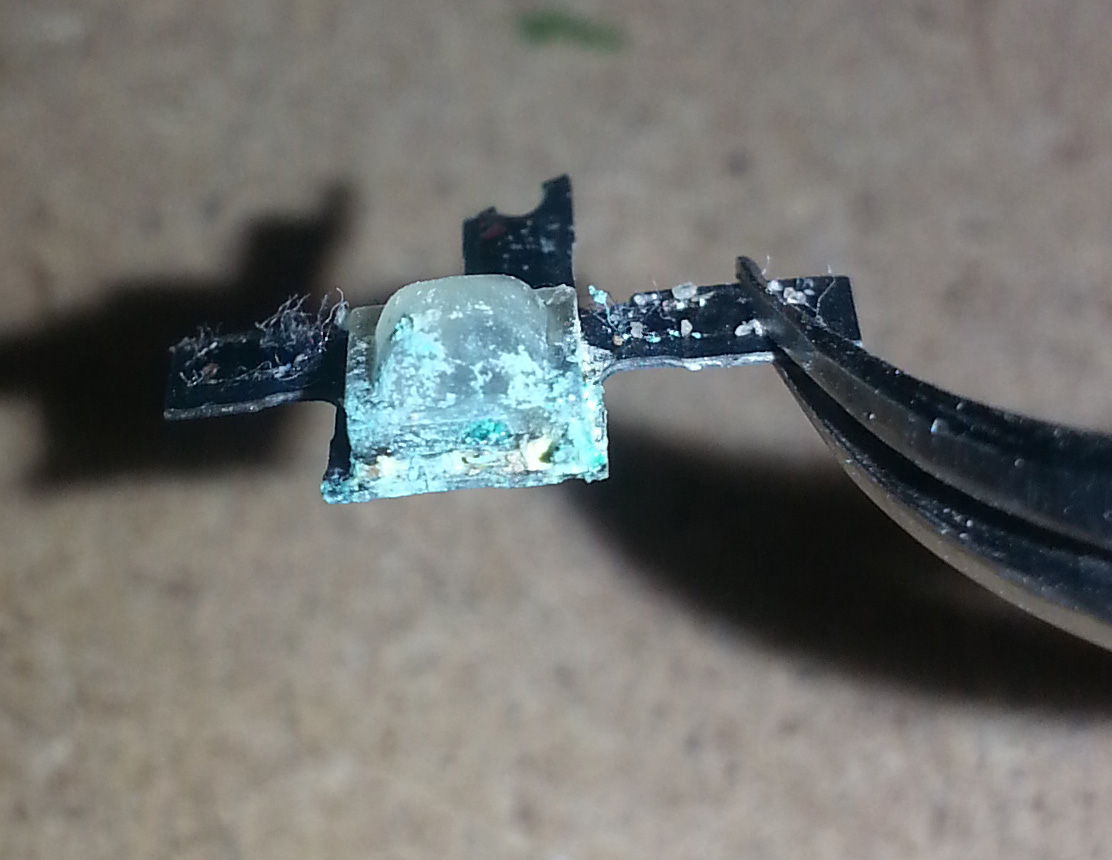