I recieved a SPAM SMS today that took over my entire screen -- apparently a flash sms or class 0. I hav atatched a screenshot.

How do I prevent these from coming through? 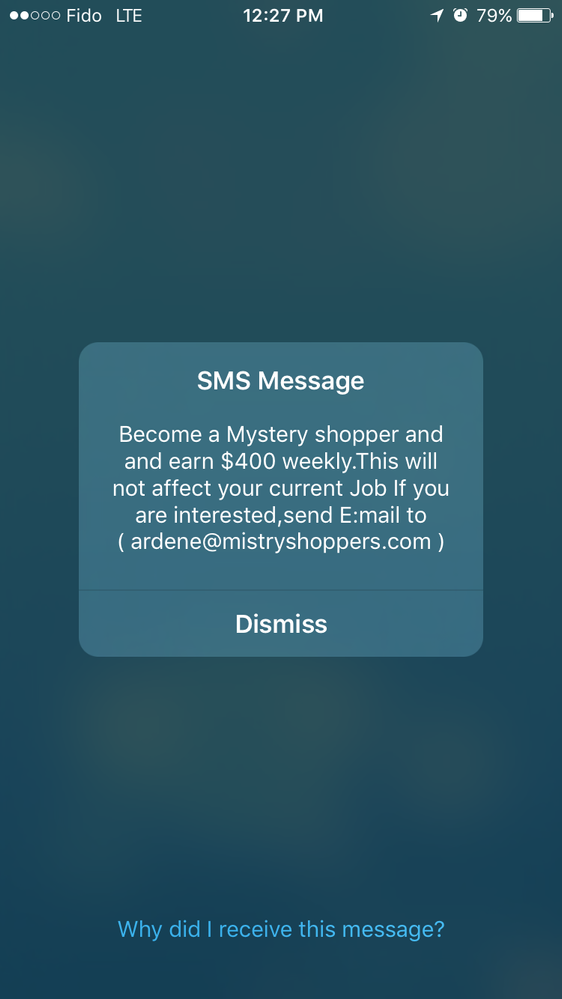 Just to add to what @FidoRachel mentioned above, the type of SMS spam you described is a little more difficult to prevent/block.

There are two ways your phone can receive SMS. The first is the more common method of sending a SMS. You type a SMS message and send it to a phone number. This method is what most people consider text messaging. As @FidoRachel mentioned, most spam of this kind are SMS sent to computer generated numbers. There is not much you can do about getting them in the first place, but they are often associated with phone numbers so you may be able to block all future messages from those phone numbers. The best thing to do would be to not respond and delete the SMS. Since the SMS are sent to computer generated numbers, there will be some SMS sent to numbers which do not correspond with actual phone numbers. If you respond, they will know your number is an actual phone number. Also, there may be charges incurred for responding.

The other method of receiving SMS is via email- to-SMS -- which is what your spam SMS appears to be. Anyone can send an email to a phone as a SMS. All you have to do is email: phonenumber@sms.fido.ca

I have previously contacted Fido about filtering spam from sms.fido.ca and they have been working hard to do so. As you can imagine though, it's more difficult to try to filter the content of an email rather than blocking a phone number. The best thing we can do is to provide as many examples of these types of SMS to help improve the spam filter.

Hey @jaysi! These message are normally not targeted, programs can be used to send mass messages to a bunch of phone numbers. A phone number is a random series of digits after all.

As much as I'd love to block them, we have no control over who sends you messages. Only thing you have to make sure, is to never provide any of your details.