I just test the speed of my Fido LTE network using an app called speedtest.

Is it normal? other courier's LTE seems like much more faster. 10Mbps is more like WCDMA speed.

If you do the test multiple times, you'll get various results.

The speed varies due to many factors (location, network congestion, etc etc)

Hottubman
I'm a Participant Level 2
Fido is correct in there response but so to is the OP. I joined a few months ago and i have yet to get close to the speeds the OP did. I csme Oublic mobile where speeds were 3 times the speed of Fido. I was a rogers customer 10 years ago. Best celk coverage and speed at that time. I guess switching to fido i thought i was getting the same network just less promotional and customer support. Turms out those things are true but the service is a real let down.

For the record, i was using the same device with public in december. Bought it ib september, unlocked LG,G5

One thing I learned since I posted my replies above is that in addition to the other factors (strength of signal, network congestion, etc) that can affect network speed, the LTE band or frequency to which your device is connected can also affect data speeds.

The different bands/frequencies have different bandwidths associated with them (see table posted here). The larger the bandwidth, the greater potential for faster resultant data transmission speeds. Obviously, most people would want to connect to the band/frequency with the greatest speed potential. However, it's not that simple. The larger bandwidth is associated with the higher frequencies. The downside of the higher frequencies is that they also have a faster rate of decay -- meaning they travel shorter distances and cannot penetrate as much as the lower frequencies (see infographic posted here).

The nature of cellular service is that it is dependent on your location relative to the cellular towers. It's possible that while you were with a different provider, you were closer to their tower, thereby allowing a LTE connection with a higher frequency. If you are further away from a Fido/Rogers tower, you might have to connect with a lower frequency.

The different mobile providers have their own strategic placement for their cellular towers. Some of those locations will benefit some customers but not necessarily others. It's not automatically true that the other providers are better. They might be better at some locations. At the same time, Fido/Rogers might be better at other locations.

Hottubman
I'm a Participant Level 2
In response to Cawtau
Hello and thank you for the warm welcome and information. My Forum status does indicate that I'm new here however I am not new to cell phones. When comparing Network speeds I'm not considering just one. I live in Oshawa. I work Markham have also tested at various points in between as well as Toronto. Quite consistently I'm getting upload and download speeds under 10 megabits per second. In the past with Rogers Koodo and public I would get upload download speeds and far exceed my Wi-Fi but so far with Fido not even close.

As far as phones responding to various frequencies I believe the LG G5 list a large number compatible network frequencies which includes all of the Bands offered by Fido. What's more the LG G5 was one of flagship offerings for cell phones. So Well Network compatibility and location maybe factors determining signal strength I do not see how they explain my results during the various locations of tested and the device used

This message was created using speech to text dictation. Apologies for any littering Miss words

MVP
In response to Hottubman

@Hottubman i'm like you I travel around and I get horrible speeds when using data, when i'm on a call it would drop to H and I can't even surf and at times it won't even download a MMS until I end the call. It's very frustrating my belief is that since the introduction of VoLTE the network has been horrible.

I'm using a Nexus 6p and I replicate the problem on a Samsung Galaxy S6 I did extensive tests and troubleshooting. Fido reset my connection over and over even had me change SIM cards. After multiple calls to Fido and finally got a rep that was intrigue with the problem and really wanted to solve it. He contacted a level 2 technician who admitted they have a problem with certain phones/account on the network and they are working on it but can't figure it out and he added my account to the list. I currently have an open ticket that has not been resolved as yet. 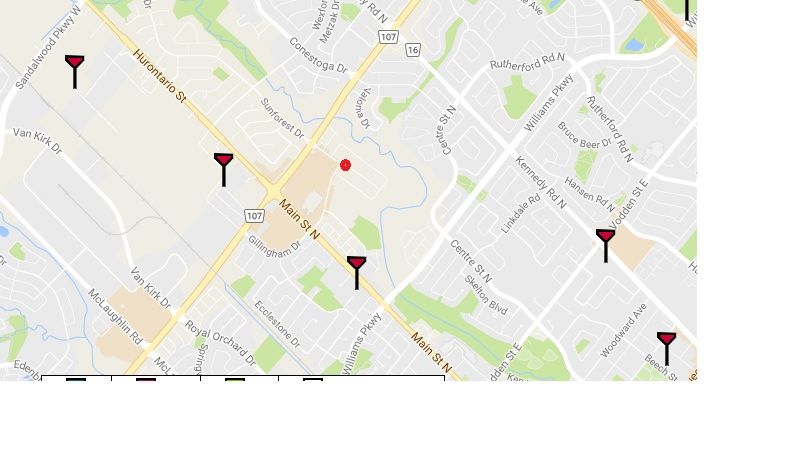 The red dot is where I am currently see the towers around me, now here is the speeds I get. 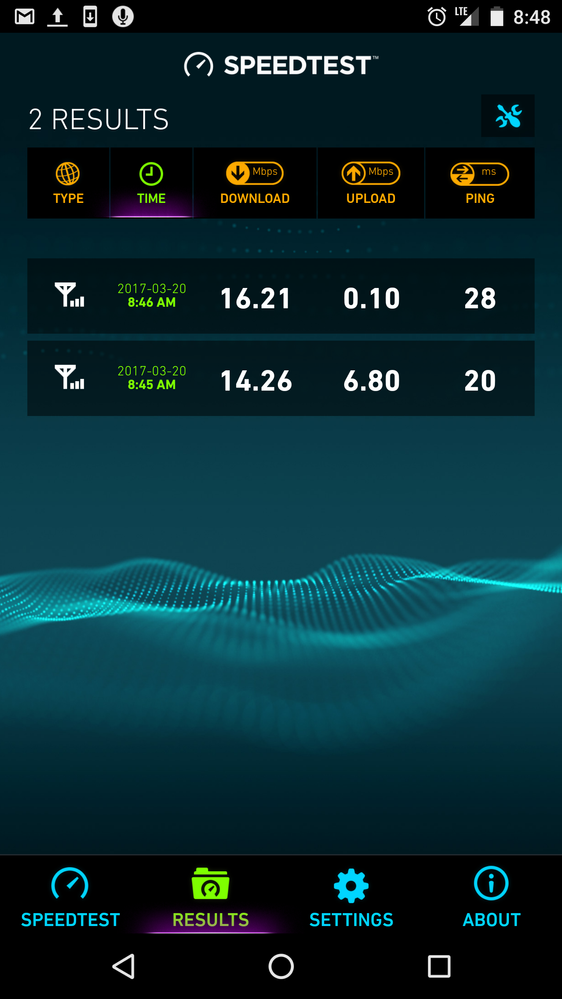 When you test your speeds from different locations, do you also vary the testing site? Different testing sites can result in vastly differing performances.

I'm not saying that the frequency bandwidth is the reason for your phone's slow data speeds. It does however, possibly explain how Roskov attained the speeds they posted above. Even my most recent speed tests -- though not as impressive as Roskov's -- tend to be greater than yours (usually 1 or 2  bar strength). They also average (18.75Mbps) right around Rogers' average download speed (see here) (note speed test results shown are pre-LTE-A) 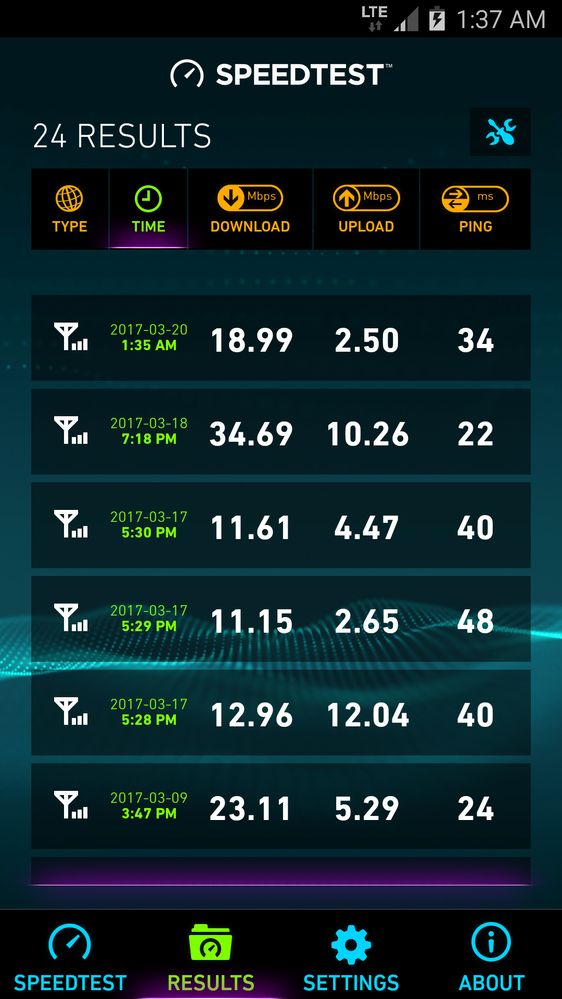 We're both using Fido. The network is capable of providing greater speeds than the ones you're obtaining. So why does my S5 tend to get better speeds than your G5?...

I found this graph from Speedtest interesting...

Hottubman
I'm a Participant Level 2
In response to Cawtau
Its nice that a fido rep has commented on this thread twice with the same " you cant prove me wrong and im not about to offer any useful feedback" standard "official" response, it really does very little to address an issue affecting several active posters and who knows how many customers. Ive done a lot of tests from a lot of locations between oshawa and toronto and betweeen toronto and aurora....regardless of tower location, there really shouldnt be any weak signal spots in the GTA, an area with 5 million people in a small geographical centre. For the record, since my original posts, i have had some more favorable results but not consistently. More often than not, i get results like i did today at 5:45pm, in the oshawa centre parking lot- 6.19DL 0.48UL and a ping of 22.
0 Likes
Reply

@Hottubman wrote:
Its nice that a fido rep has commented on this thread twice with the same " you cant prove me wrong and im not about to offer any useful feedback" ...

I assume you're referring to my earlier posts (there weren't any others who posted more than once since your post). Firstly, I do not work for, nor do I represent Fido.

I posted information regarding a likely possibility you're getting the speeds you're getting. You chose not to believe that explanation. Fair enough. But that doesn't mean the information I posted was not a contributing factor -- whether you believe it or not.

@Hottubman wrote:
...there really shouldnt be any weak signal spots in the GTA, an area with 5 million people in a small geographical centre....

That right there, is a fundamental limitation of cellular data -- for all mobile networks. There is a finite amount of bandwidth for any given location. The more people within that location, the more that bandwidth needs to be shared. Add to that, the changing use of mobile data. More and more people are using their devices to stream music or video. The increased data requirement of streaming services only adds to the network congestion.

When would one likely see a decrease in speed? After work or school and evenings, when more people are using the networks.

Yes, it affects everyone in large urban areas -- regardless of provider. Along with the many other factors that affect speed, that's why none of the mobile providers can guarantee speed. If any, they only provide theoretical or peak speeds.

I'm sad to hear that you feel as though our feedback wasn't helpful @Hottubman however the information provided by @FidoStephane is as accurate as it gets!

Have you ever considered reporting this on our App ? Simply log in to My Account then click on your phone number, then at the bottom on Network Aid. You can also do it right here .

It's a great way to keep us in the loop when you are experiencing Network issues that are intermittent.

My speeds seem pretty good to be honest, better than i expected at least. With a Moto X in Montreal.

First image is 4/5 bars LTE when outside. I tested in about 5 different places on my way home, the lowest I got with 3 bars was 44MBS. 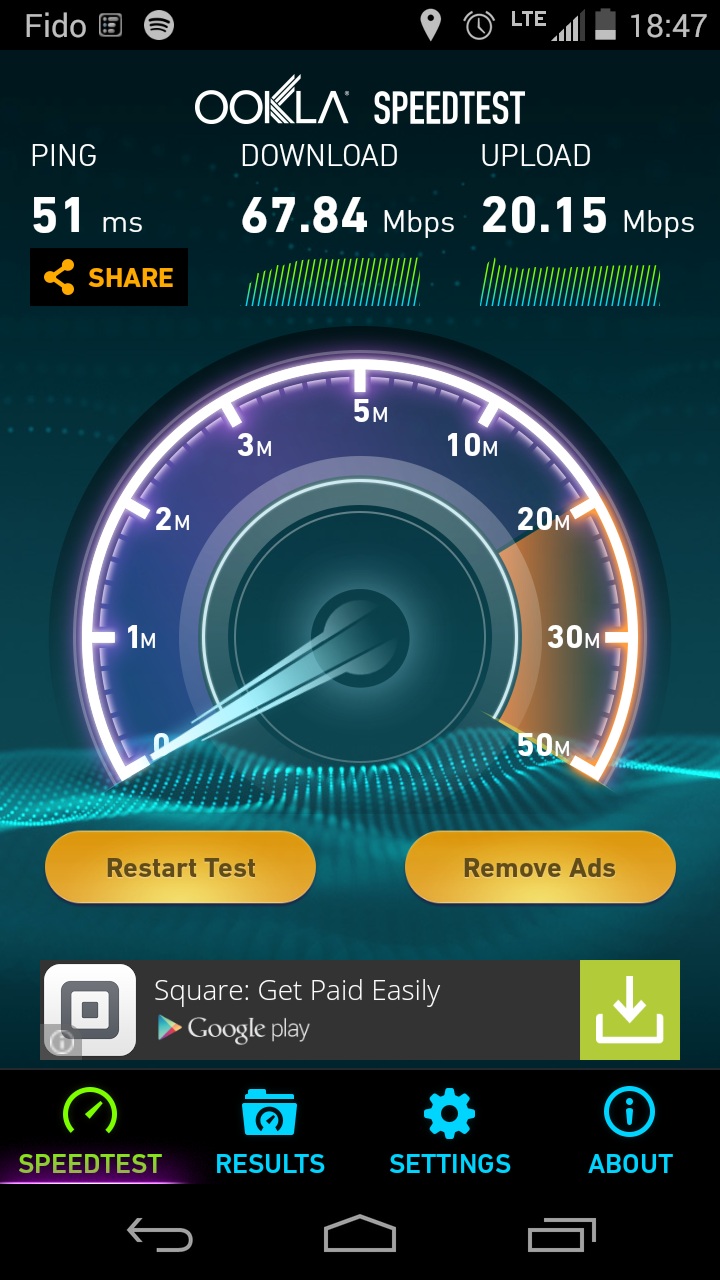 Second image is LTE inside the house with 2 bars. I was very surprised by this one considering there are 2 spots in the house where I lose data completely sometimes. 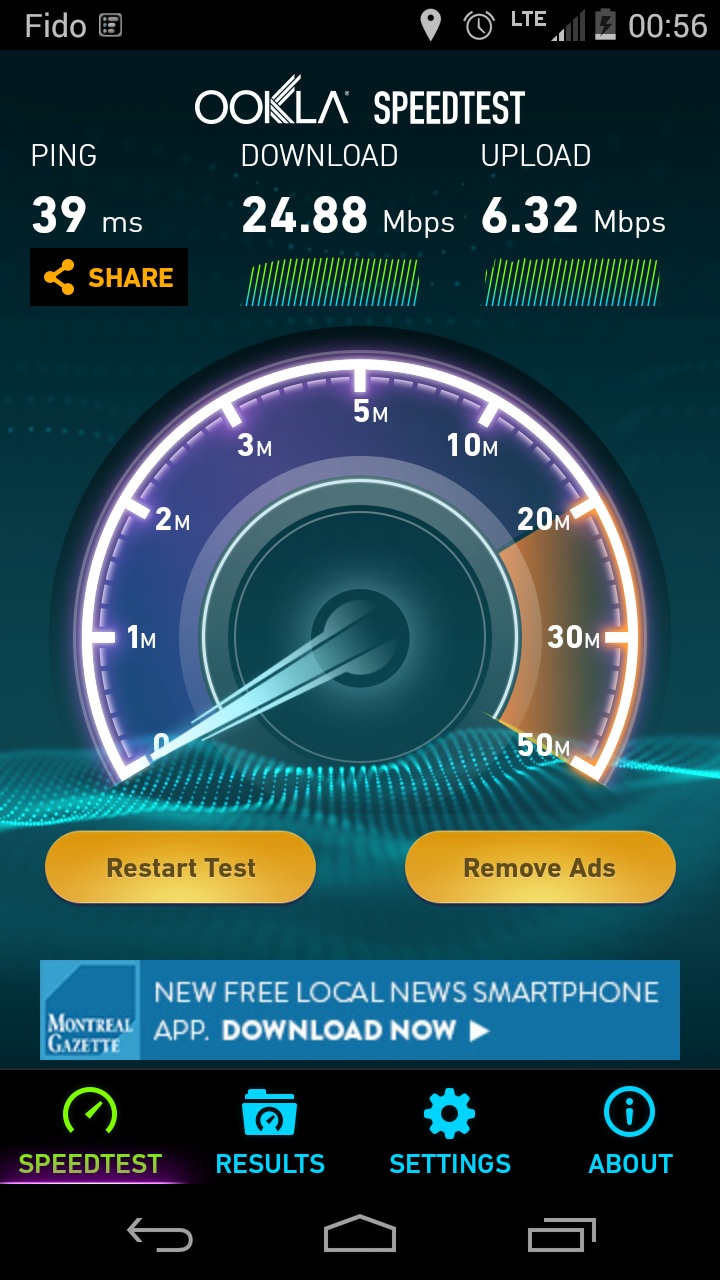 If you do the test multiple times, you'll get various results.

The speed varies due to many factors (location, network congestion, etc etc)

Senior MVP
In response to FidoStephane

It looks like I'm running about 50 percent when it comes to acheiving the listed typical download speeds of 12 Mbps to 25 Mbps. Taken from: http://www.fido.ca/web/page/portal/Fido/CoverageSupport&lang=en?cm_mmc=Redirects-_-External-_-Market...

I know there are other external factors that determine download speeds, I was just hoping it would be a little more consistent.

I know there is another thread re: Fido vs Rogers LTE, where I actually previously commented on. However, after doing some additional research, I'm curious as to why Fido states "upto 40 Mbps for select devices" whereas Rogers states "upto 75 Mbps or even 150 Mbps". Does Fido need to update the info on their website? Or does Fido indeed have limited access to Rogers' network as suggested in the other thread?

EDIT: Okay, I just re-read: "As device selection evolves, you will be able to take advantage of the full potential of the Fido LTE network and maximum theoretical speeds will increase to up to 150 Mbps".

Anyways, I just posted to inform the OP of the stated 'typical download speeds'... 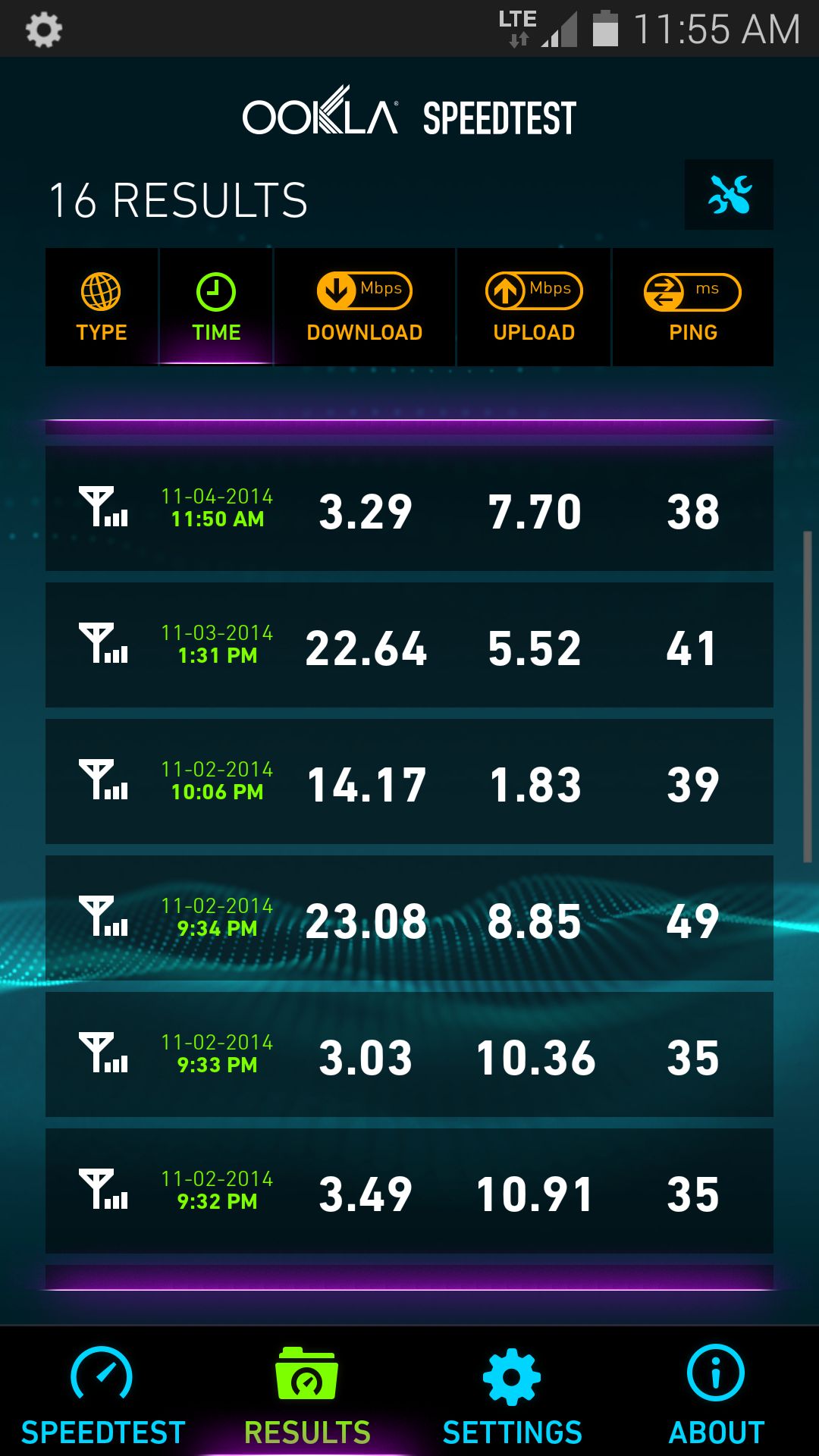 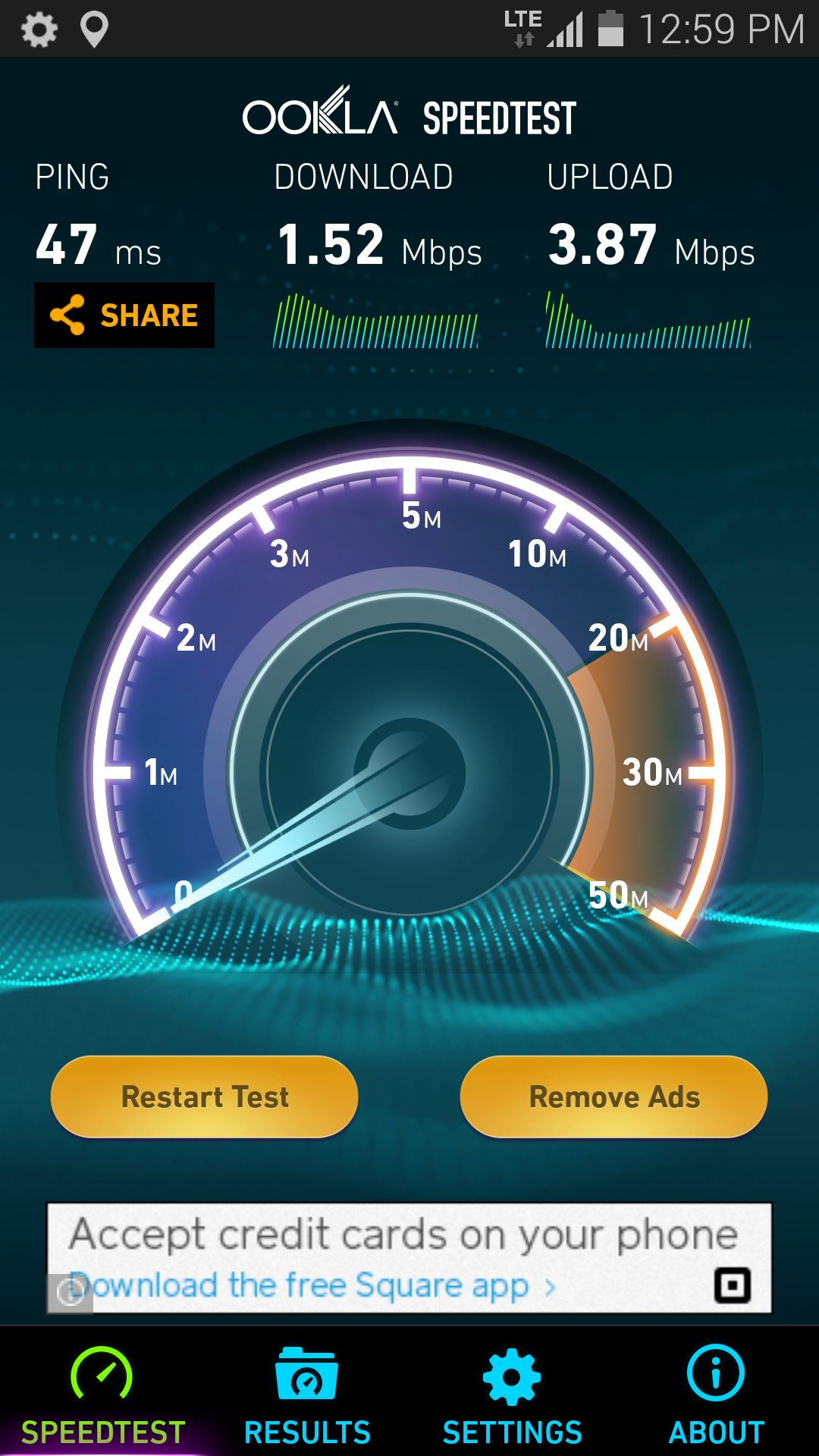