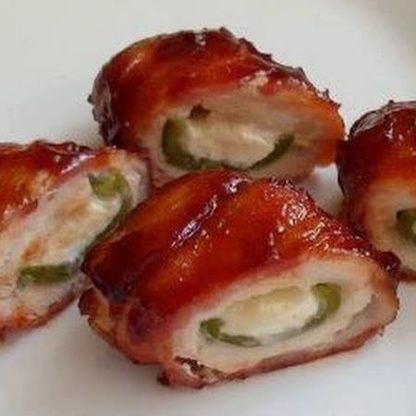 5 jalapenos, sliced in half lengthwise and cleaned

Slice chicken breasts in half (like a hamburger bun), place between wax paper and pound until it's 1/4" thick.

Mix the two cheeses together and smear about 1 Tblsp into each pepper half (just use up the cheese between all of the peppers).

Place the pepper on the chicken breast and wrap it up as best you can. I suggest placing the pepper cheese side down so it gets completely covered by the chicken.

Wrap each chicken breast completely with two pieces of bacon. Start at one end, wrap half the breast and finish the second half with the other piece of bacon.

Cook on a preheated 350 degree grill over indirect heat for 30 minutes or until chicken is done. Turn every 5 minutes and baste with BBQ sauce each time you turn it.

For oven: Bake at 375 degrees for 30 minutes or until chicken is done. Baste a couple times and finish under the broiler to set the BBQ sauce. **I suggest a 400 degree oven and no BBQ sauce for the first 20 minutes, turning once to help cook the bacon. Then reduce heat to 375, change pans to lose some of the bacon fat (if you don't have a broiler pan), cover in BBQ sauce and finish baking.