I have a prepaid account with auto top-up option, and rarely review my transactions history. Recently I happened to have to check the cost of one of my calls and was surprised to find that I have been charged 3 times for 1 text message I just sent! I called Fido which credited back 2 charges to my balance, saying they would forward the problem to their technical team. They didn't seem surprise which gave me the impression that it was not a new issue. I then went through my transactions history and found the same thing happened on a few occasions. And this is going back 60 transactions only! I was lazy to call them again as it's no fun doing being kept on hold forever just to get that few cents back. To check if the problem has been resolved, I logged int to my account to check each time I sent out a text, and again, it happened 2 out of 3 times! I tried calling them again but no luck, on hold forever.

It seems others had similar yet different problems before - receiver getting the same text 3 times. However , since most people don't get charged per message sent, they wouldn't have my problem. But I suspect both problems share the same origin.

Just as an FYI to lessmiserable and anyone else seeing this issue. For me, the problem was that there is a 160 character limit per text message that I didn't know about. If you send a message over this limit, it will display on the billing page at fido.ca as a seperate text (and seperate charge) for every 160 characters your text has. Most phones will display it as one text message still. (The 160 limit isn't a fido thing, check out https://en.wikipedia.org/wiki/Short_Message_Service or do some google searches if you want to get technical)

Thanks to FidoKenny and FidoPierre for helping me troubleshoot this.

lessmiserable
I'm a Contributor Level 2
In response to Mike15

Appreciate the heads up. The said possibility was suggested and I did forward a snapshot of the text in question to Fido. I have not had any updates from them. I manually counted the characters. While it could have exceeded the 160 limit by a few characters, assuming the emoticon took more character spaces than apparent, there's still no way the length could have gone beyond 320 for me to be charged 3 times.

I would appreciate it if Fido could clarify as soon as possible. If it was a technical glitch, it's only fair that I be credited back accordingly. As I have said, it happened on more than one occasion and that's going back 60 transactions only.

Thanks for your prompt response! Do you mean you're waiting for my reply? I received an authentication form which I filled out immediately but never heard back. Did I miss anything? Please advise. Thanks again...

Did you reply to the private message to let us know that you filled out the form?

By the way, in case others are interested, this is the message that cost me 90 cents instead of 30 to send. As you can see, it may be longer than 160 characters, but no way longer than 320, the number it would have to exceed for the system to charge me 3 times the price of 1 text.

I was asked to send the text to fax@fidomobile.ca for their technical people to take a look more than a week ago when I contacted helpdesk, and to date, nobody has gotten back to me. 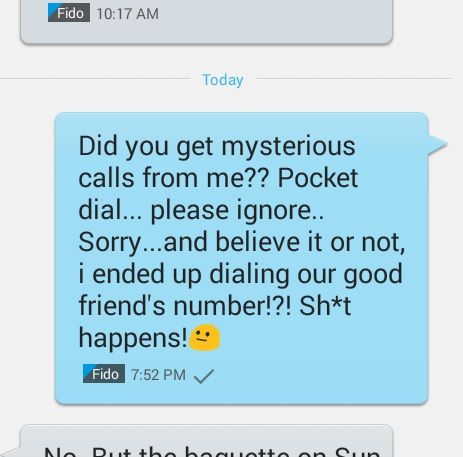 Senior MVP
In response to lessmiserable

I understand this thread is a little old, however, I recently replied to a similar posting here, so I thought I would clarify this thread as well.

I also understand that @Mike15 mentioned the limit of 160 (7-bit) characters in his post above. However, what what was not mentioned is that the character limit can change depending on what characters are used (see my other post). In that post, I only referred to the 8-bit and 16-bit character counts for simplicity's sake. Since an emoji (16-bit) was used, the character limit was reduced to 70.

In addition, as noted in my other post, the number of characters allowable in each segment of a segmented SMS is slightly less than what is allowable for a single SMS due to technical reasons. In this case, the character limit for each segment is 67.

The text you noted contains 162 characters (remember, spaces and returns also count as characters). That message would have been broken into three segments because the number of characters is greater than 134 (maximum number characters for 2 segments).

So you were charged appropriately for that message. I apologise for not coming across your thread sooner. It might have saved you some aggrevation.

Well...enough time has passed I think, but still no news from Fido! It should not be rocket science to find out the reason for the system screw-up! Truth be told, Fido is hoping it'll be forgotten over time. Afterall, I'm sure they have bigger fires to put out!

I have been inconvenienced terribly as I've been reluctant to text for fear of being overcharged. I don't want to have to log in to my account to check how much they have deducted from my balance each time I send out a text message! If there's any slightest hesitation of whether to convert my prepaid plan to a long-term contract with Fido, it's gone! I'm glad I have resisted the temptation to switch!

Honestly now, if it's of no help telling my story here, let's not waste anyone's time and tell me to go away. I will call helpdesk again for solution. Push comes to shove, I'll take my story to the social media for solution...

I assure you that we haven't forgotten about you and definitely want to get this sorted out for you!

I'll send you a PM right away so we can look into it.

This definitely should not be happening! I'll send you a PM so we can check this out for you.

Mike15
I'm a Participant Level 2
In response to FidoPierre

I'll send you a PM so we can take a closer look at this together.